Bahrain was named a 'major security partner' by the Trump administration, alongside the United Arab Emirates. It remains unclear what the designation means (Screengrab)
By
MEE staff

US President Donald Trump awarded the king of Bahrain with the legion of merit award on his last full day in office.

The US embassy in Bahrain confirmed on Tuesday that King Hamad bin Isa al-Khalifa had received the award for his "visionary leadership" in the region.

"His Majesty King Hamad bin Isa Al-Khalifa on receiving the Legion of Merit for his visionary leadership in the pursuit of peace and strengthening relations between our two countries and across the region," the US embassy said in a tweet.

The U.S. Embassy in Bahrain congratulates His Majesty King Hamad bin Isa Al-Khalifa on receiving the #LegionofMerit for his visionary leadership in the pursuit of peace and the strengthening of relations between our two countries and across the region. pic.twitter.com/Ee6I3yQGbb

The legion of merit is a military award created to honour allied leaders in World War Two. It had gone into obscurity until it was revived by Trump, who last month also presented it to the prime ministers of Australia, India and Japan.

On Saturday, the island nation was also named a "major security partner" by the Trump administration, only a few days before US President-elect Joe Biden is due to be sworn in on Wednesday.

A White House statement said that the designation was in recognition of Manama and Abu Dhabi's "extraordinary courage, determination and leadership".

It remains unclear what this new designation means for Manama, which has hosted the US Navy's fifth fleet since 1995.

In September, Bahrain normalised diplomatic and trade relations with Israel as part of an initiative championed by Trump's son-in-law and special adviser Jared Kushner. 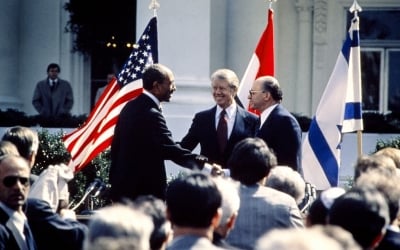 Manama became the fourth Arab country to recognise Israel after the United Arab Emirates, Egypt and Jordan. Sudan and Morocco have since followed suit.

Bahrain has signed a "joint communique" with Israel to establish full diplomatic relations. The two countries are expected to open embassies.

The agreements were signed in a ceremony at the White House attended by Israeli Prime Minister Benjamin Netanyahu and Sheikh Abdullah bin Zayed al-Nahyan of the UAE.

Under Khalifa, Bahrain’s human rights record has been denounced by rights groups, as his government carried out executions, convicted government critics and clamped down on independent journalism, particularly since a brutal crackdown on the 2011 protests. Diplomacy
Explained: Sisi, Macron and the dubious history of France's Legion of Honour