Beirut between resilience and desperation in aftermath of deadly attacks On Friday Lebanon held a day of mourning, after suicide bomb explosions on a commercial street in Bourj el-Barajneh, a southern suburb of Beirut, on Thursday left at least 43 people dead and over 200 injured in an attack claimed by the Islamic State.

As a mark of respect for those who lost their lives, a day of mourning was announced by Prime Minister Tammam Salam, with schools and universities in Beirut and elsewhere in the country closed.

In a pharmacy, in the central Beirut neighbourhood of Gemmayzeh Aida al Hajj, an employee of the shop, sat alongside her five year-old daughter and told of her grief at the attack.

“I felt desperate when I heard the news,” relayed Aida, explaining that her daughter´s nursery school had been cancelled for the day. “As Lebanese we have had enough of this,” she continued, with a shake of her head, standing behind the pharmacy counter.

“We just want peace, the minimum a human being can ask for, so our children can grow up and go to school normally.”

On Friday morning Prime Minister Tammam Salam headed an emergency meeting with senior MPs and military leaders including the country´s Defence and Justice Ministers and the head of the Lebanese Armed Forces (LAF).

Shortly afterwards a statement was released calling for security measures to be “intensified in all Lebanese regions.”

Salam has also called on all political parties in Lebanon to maintain unity “against plots to create strife.” International actors including the UN, and UK, French and US governments have also been quick to condemn the attacks.

“Nearly all Lebanese have faith in the Lebanese army,” said Kareem Darwishe, a resident of the Beirut district of Tariq el-Jedide, standing outside the small coffee shop he owns in Downtown Beirut.

“But the political situation over the last year has been very bad. This makes people even more afraid at times when there are bombings and security threats.”

Currently Lebanon has been without a president for a year, a reality that has compromised executive making power, brought state institutions to a standstill, and lowered public faith in the country´s political establishment.

Thursday´s attack came on a day when Lebanon´s rival March 14 and March 8 blocks, lead by the Sunni Future Movement and Hezbollah respectively, met in parliament and approved a number of draft laws. It marked the first time a successful legislative session had been held in Lebanon´s parliament in over a year.

Also on Thursday, in the northern city of Tripoli, LAF personnel successfully dismantled a bomb placed near a café near the Jabal Mohsen neighbourhood. The night before, security forces had detained a would-be suicide bomber in the Qobbeh district of the city.

“The alertness of the security forces has saved a lot of bloodshed,” said Khalil, speaking from the site of the explosion on Friday afternoon.

For his part, in comments to AFP, Bilal Farhat, Hezbollah MP for Baabda, described the suicide bombings in Bourj el Barajneh as a “satanic terrorist attack.”

Speaking to Middle East Eye, Mouin Merhebi, a Future MP from the March 14 political block, said that attaching blame to Hezbollah for the attack was unconstructive.

“Some have said the motivation [of the attackers] is Hezbollah´s participation in Syria, but even if I am against Hezbollah´s intervention, nobody can understand the killing of innocent civilians, there is no explanation to it.”

But not all political actors within Lebanon have been able to maintain a voice of unity regarding Thursday´s attacks. Current Labor Minister and Kataeb MP Sejaan Azzi was quoted in local press stating that the attacks were a consequence of Hezbollah´s military participation in Syria in support of President Bashar al-Assad’s government.

Last week, opposition activists claimed that Hezbollah’s militants were crucial to dislodge IS fighters from the strategic Kweiris airbase in Aleppo province.

Merhebi, who is part of the same March 14 block as Azzi, said that Hezbollah´s participation in Syria had heightened security threats in Lebanon.

“Governmental power is very limited at the moment; it is basically limited to only some financial decisions. Political unity is a must, but the master-key for this unity is Hezbollah leaving Syria, giving all weapons to the LAF and Iran must stop meddling in other countries´ affairs.”

Sitting in a tent beside Martyr´s Square, Hassan Taabash, 35, affirmed that “people are scared this could be repeated, it is a tragedy”. A manual labourer from Hula, a town in southern Lebanon, Taabash explained that he had been based in Martyr´s Square for the past 16 days. He explained his actions were intended as a show of solidarity with current protest movements in Lebanon demanding a resolution to the country´s ongoing rubbish crisis.

“We live in a sectarian system but Gulf states like Qatar, Saudi and also Turkey should also be held responsible for this attack. At the start of the Syrian war they were desperate for Assad to go, they funded the opposition, and groups that later joined Daesh (IS). They helped them grow,” continued Taabash, who declined to comment on Hezbollah´s military role in Syria.

“As a country we are hurting right now, but we have been pushed to the limit before. We are resilient.”

In the aftermath of Thursday´s bombings Lebanese citizens were quick to take to social medial to express their sadness at an attack that took place on a busy, commercial street at rush hour.

Amongst the outpourings of grief, images of Adel Termos, killed in the attacks, were shared as a particular source of sadness. Termos is said to have died tackling the second suicide bomber in an attempt to limit the deadliness of the blast. His daughter also died in the explosion. At the scene of the attacks mourners placed candles and flowers in remembrance of the victims.

But politicians weren’t receiving as much praise the day after. Back in the pharmacy Al Hajj said she was tired of the constant messages from political leaders asking for unity amongst all Lebanese

“They are asking us to be united, but people are already united,” Al Hajj said while searching for medicine for a customer. “They are the ones that are not united!”

Standing outside the corner-shop she owns in Ashrafiyeh, Nadine Hayek, 46, appeared devoid of any optimism.

“I was born in war, I grew up in war and I will die in war,” said Hayek. “Nothing changes.”

Hayek claimed that Lebanon´s political divisions were not representative of Lebanese society at large.

“We all like each other, Christians, Muslims, Druze. What happened yesterday is inhumane, it is an act of violence against all of us”.

Few customers approached Hayek´s shop on Friday as nearby schools were closed.

“Most of my customers are students,” explained Hayek. “Sometimes I lose hope.” Behind Hayek a TV displayed images of workers collecting debris from buildings surrounding the site of the blast in Bourj el-Barajneh.

“We hate to see this in our country.” Inside Lebanon
Lebanon in mourning after Islamic State attack 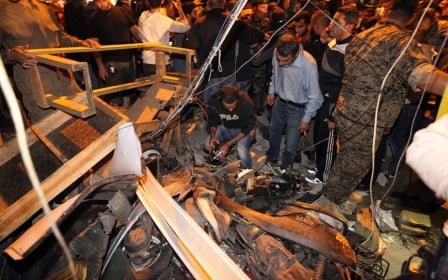 Inside Lebanon
Beirut blasts: Why now and what’s next?