'The bells would ring': How Palestinians celebrated Christmas before life under occupation 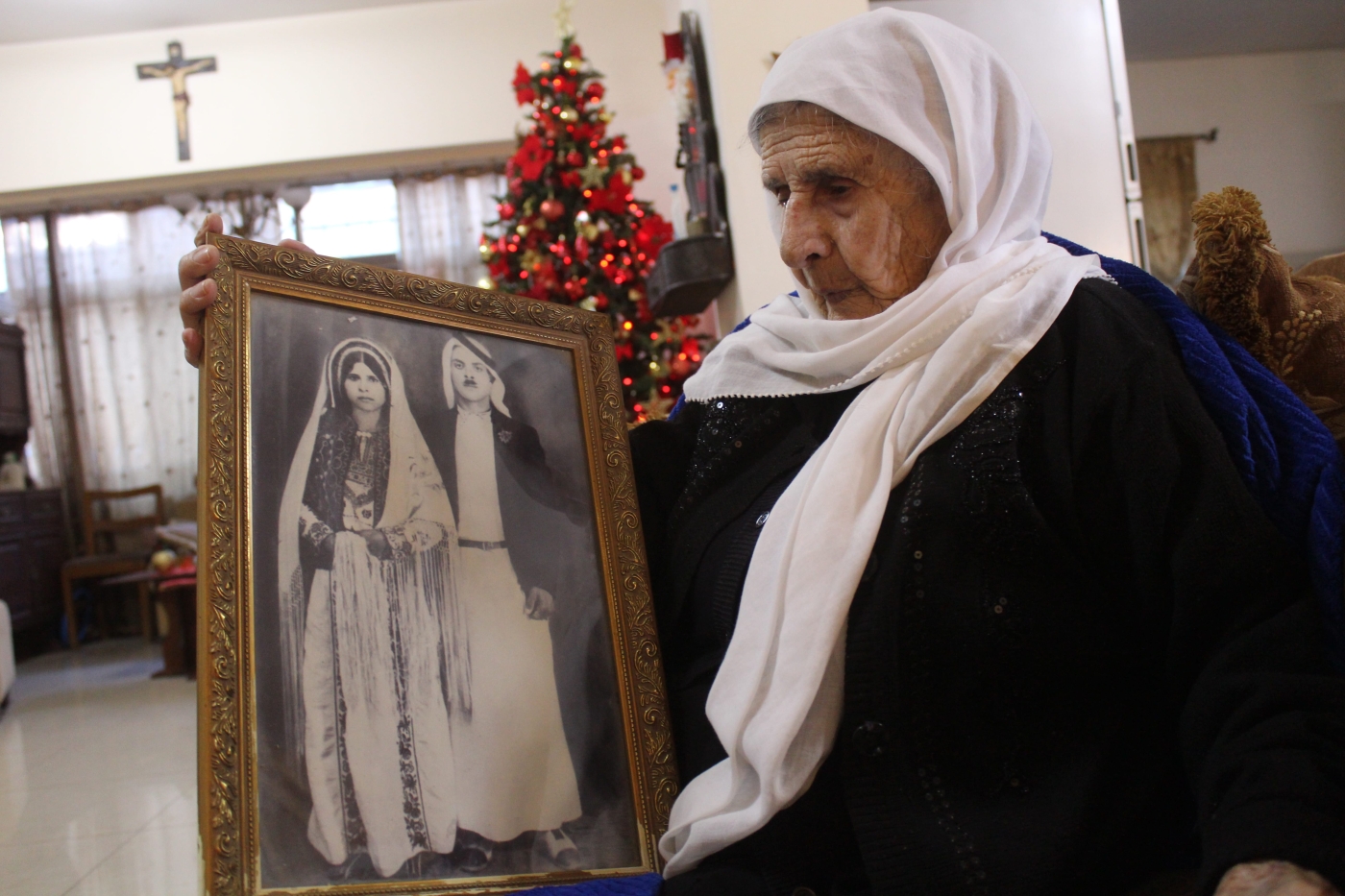 Victoria Baseer, a 102-year-old resident of the West Bank village of Taybeh, looks at a photo showing her wedding day in the 1930s (Shatha Hammad/MEE)
By
Shatha Hammad
in
Occupied West Bank

Perched next to a large and brightly lit Christmas tree at the home of one of her children, Victoria Baseer surveys an old photograph of herself and her husband on their wedding day at the beginning of the 1930s.

Three of her grandchildren surround her, playing with their new toys.

On the table are plates filled with Santa Claus chocolates and biscuits, ready for family and friends who will stop by to celebrate the holiday.

Victoria is a mother of six. She is considered the oldest resident of Taybeh village east of Ramallah city in the occupied West Bank, surpassing 102 years of age.

She says that every year, she spends some time reminiscing about her childhood memories during Christmas, which she says was celebrated in a much simpler way in the past.

“Nothing is the same. Today, Christmas is all about imitation, extravagance and exaggeration; that was never part of our traditions and customs,” she tells Middle East Eye.

Describing how Palestinians celebrated Christmas in the past, Victoria says they would start the holiday by praying at church and end it with social visits. There were no Christmas trees, no presents, no new clothes nor sweets, she recalls; just love, peace and contentment.

Each year, her mother would cook the popular Palestinian dish Maftool, similar in texture to couscous. She would also make a special kind of sweet that has now been forgotten, says Victoria.

“It was a simple sweet called Qarsa, My mother would prepare the dough on Christmas eve, wrap it in a piece of cloth, and hang it from the ceiling until the next day. She would then bake it in the old mud oven," explains Victoria.

"When it was finished, she would cut it up, pour some olive oil on top and sprinkle some sugar on it as well. That is what we would have for breakfast on Christmas day.”

She does not recall ever wearing new clothes on Christmas or receiving gifts; it was never part of the ritual.

“My father would buy exactly seven Bayd al-Hamam candies – one for each of his children. My siblings and I would each have one, with the utmost happiness. Today there are many different chocolates and biscuits, but the real Christmas spirit is missing.”

For visitors during the holiday, the family would offer dried figs that they had stored in the summer, along with coffee.

Putting up a Christmas tree at home, says Victoria, became part of the holiday tradition in Palestine only recently.

“During prayers at the church, the priest would give blessings on a bunch of small olive branches, which he would then distribute among us. Each of the families would then return home and hang the olive branch in the house,” she tells MEE.

'Christmas would pass in silence for years – the families of the village refused to rejoice and give out sweets. We hung black flags on our homes and lived in constant fear of an attack'

Despite the simplicity of the holiday celebrations in the past, Victoria says the pureness and real happiness that reigned among Palestinian families at Christmas disappeared after the Nakba, or catastrophe, of 1948,when hundreds of thousands fled or were driven from their lands by Jewish paramilitary groups during the conflict that followed the partition of historic Palestine and led to the creation of Israel.

“How could we have continued to celebrate after they occupied Palestine?” says Victoria, her voice noticeably firmer.

“Christmas would pass in silence for years – the families of the village refused to rejoice and give out sweets. We hung black flags on our homes and lived in constant fear of an attack on the village, which became a passageway and shelter for the men who fought against the occupation.”

'The bells would ring'

To the north of Ramallah city, in Aboud village, elderly women gather on Sundays at the Orthodox Church of the Dormition of Virgin Mary.

They participate in the religious service, raising their voices loud in prayer, before heading to a hall in the church as they do on a weekly basis to drink coffee and socialise.

They discuss Christmas preparations and reminisce about their childhood memories during the festivities.

A number of elderly women in Aboud have clung to the tradition of always wearing the Palestinian embroidered thobe; a practice that has slowly disappeared over time.

Rafiha Elyas, 83, attends prayers in a brown thobe embroidered with red silk; she wears a white scarf to cover her hair.

“In Aboud, we continue to cling to our Christmas traditions and the celebrations of the past, yet our happiness is constantly accompanied with anxiety and fear of an Israeli army raid on the village,” she tells MEE.

The women of Aboud are well-known locally for their creativity and skills in making Christmas treats – the most important of which is a wheat porridge known as Burbara, in reference to Saint Barbara’s Day, an annual holiday celebrated in the Arab world on 4 December.

“During Christmas, we would make all kinds of popular Palestinian sweets, including Zalabiya and Mutabbaq – but my health is an obstacle for me these days,” says Rafiha.

“The bells would ring and the churches would open their doors – we would start our day by praying – before embarking on visits to family, friends and neighbours, exchanging blessings and offering sweets and coffee.”

However, he regrets that Christmas traditions are no longer the same.

“Today these formalities have decreased, and social visits are more limited to family,” says Saad, explaining that Israel’s occupation has made it difficult, and sometimes impossible, to access family and friends, or even to pray in the Church of the Nativity in Bethlehem and the Church of the Holy Sepulchre in Jerusalem.

“There are Israeli army checkpoints in every corner these days – even at the entrance to our village – they force us to stop, delay and restrict our movements. Life is becoming more constricting every day, and we are losing our will to celebrate the holidays – we feel fearful and anxious all the time,” continues Saad. 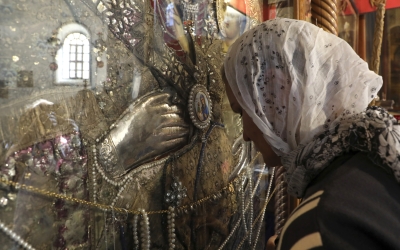 'The last generation': How occupation is driving Christians out of Palestine
Read More »

As for the evolution of the Christmas tree, Saad says back in the day he and his family would put up a simple “branch from the cypress tree and decorate it with natural flowers”, differing greatly from today’s “plastic trees, embellished with lights, decorations and coloured glass spheres”.

Christmas sweets and gifts, says Saad, were also much simpler during their time. “The Halqoum sweet was the gift we would get during the holiday – each of us would get one, yet we felt like we had received a big gift.”

For Christmas lunch, Saad’s family would cook chicken, while Rafiha’s would make the traditional Maftool.

“All we wish for is peace and for an end to the occupation,” says Rafiha.

Saad, who follows politics more closely, says the worsening reality for Palestinians is a constant worry.

“Trump’s policies in favour of Israel are legalising the confiscation of the rest of our lands. The future of Palestinians is unknown, but we continue to cling to our search for peace and the liberation of Palestine,” says Saad.

Jalila Hanna, a 71-year-old mother of 10 and grandmother to 32 children, attended church with her daughter.

She says Christmas in the past was much merrier. “We celebrated with a sense of safety and security, unlike today,” she tells MEE.

Jalila spent much of her youth working on her family’s fields in Aboud, growing onion, garlic and wheat.

She and her family always eagerly awaited the holidays to take a break from the exhausting field work.

“The [Israeli] occupation confiscated a patch of our lands that had over 100 olive trees and gave it to the settlement of Beit Aryeh nearby. We are no longer allowed to access it… we lost all that work we put into the field with a blink of an eye,” she says.

Christmas day was celebrated as an occasion to visit family and friends, and to have lunch together at home, recallsJalila.“My mother would make either Maqloubeh or Maftool.”

Maryam Hmaid, one of Jalila’s friends who also attendschurch, says she and her family would put up a branch of cypress tree, and gather with her siblings to decorate it with simple ornaments.

“Everybody in the village would visit one another and congratulate each other on the holidays. Today it is limited to close family, which is really sad,” Maryam tells MEE.

The 65-year-old mother of five and grandmother to 18 children says she wishes for Christmas to go back to how it was in the past.

“We wouldn’t wear new clothes, and it was all very simple, including the food we ate. It was filled with love and comfort. Today the value of Christmas has changed – people use it as an opportunity to show off clothes, homes and gifts.”

Maryam recalls how her mother would make special treats, including Ka’ek biscuits stuffed with dates and walnuts – a recipe she inherited.

“The new generations refuse to make them – today they rely on ready-made, store-bought sweets. We fear that they will forget the popular Christmas sweets that we’ve mastered,” she continues.

A holiday for the children

In the village of Beit Jala northwest of Bethlehem city, the family of Atallah Khalil Abu Ghattas gathered to celebrate the holidays, along with their grandchildren who wore new clothes and ate traditional sweets prepared for them by their grandmothers, consisting of jam pies and nuts.

“There were fewer people in the past, so we were much closer – Christmas was a very intimate holiday. The political situation in Palestine, however, has had a direct impact on the Christmas atmosphere,” Atallah, 82, tells MEE.

During Jordanian rule over the West Bank, says Atallah, the number of tourists increased dramatically, transforming the nature of Christmas in Palestine from a simple yet cherished holiday into one that came to incorporate many western elements, including extravagant decorations and Christmas trees.

Israel’s occupation of Jerusalem, the West Bank and Gaza in 1967 directly influenced Palestinian Christmas celebrations, says Atallah, and cast a dark shadow over the joy and splendour of the holiday.

“The pureness of Christmas no longer exists. We cannot celebrate when the whole country is under occupation and our lives, down to the minute details, have been turned upside down.”

During the first years of the 1967 occupation, Atallah was imprisoned and spent five years behind bars.

“It was no longer my priority to celebrate Christmas. Our joint priority was to struggle and defend our homeland,"he says.

“Christmas became a holiday for the children, to buy them new clothes and toys and to try and bring joy into their hearts despite the difficult political situation and its impact on us.”

Atallah explains that over the years, many Palestinian Christians from Beit Jala left the country in search of a better future – the largest diaspora from the village now resides in Chile.

“We celebrated Christmas in the past with safety and without anxiety or pressure. With Israel’s occupation and the political situation today, Christmas just does not feel the same as it did,” he continues.

“I do not consider myself to be one of the people celebrating Christmas anymore. To me, it is a holiday for my young grandchildren.” 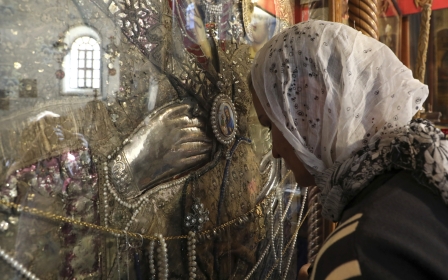 Religion
'The last generation': How occupation is driving Christians out of Palestine 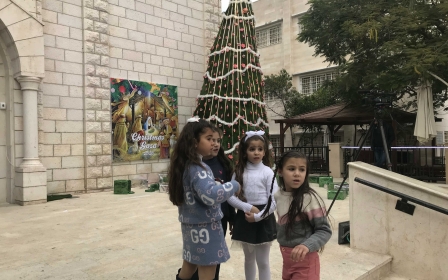 Occupation
'We are all trapped': Israel bars Gaza's Christians from visiting holy sites Trump
Trump's 12 days of Christmas: The gift that keeps on giving - to Israel
Kamel Hawwash