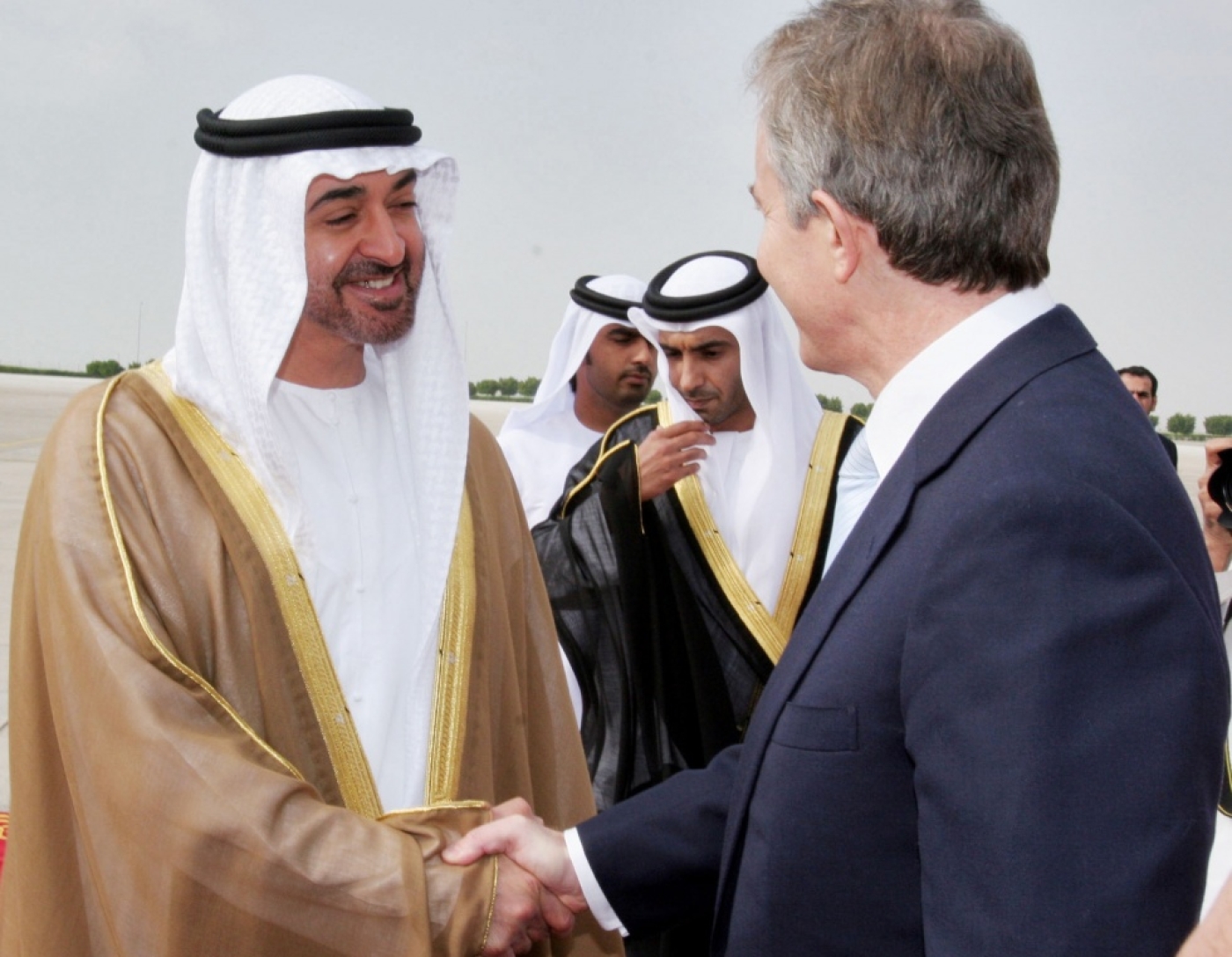 Former British Prime Minister Tony Blair is working closely with Emirati Crown Prince Mohammed bin Zayed al-Nahyan on issues relating to regional security and the Muslim Brotherhood, according to a report published in the Financial Times (FT) on Monday.

The story cites sources close to Blair as saying he is overseeing a report investigating allegations the Muslim Brotherhood are involved with terrorism, accusations which have been made by military-led authorities in Egypt and their financial backers in the Gulf who vehemently oppose the group’s moderate Islamist ideology.

While members of Blair’s staff say the report is for his “personal use”, the FT’s sources say it is being written for the UAE’s leaders, principally Sheikh Mohammed with whom the newspaper says the former prime minister shares “chemistry”. A diplomat who is aware of the briefing document told the FT its purpose will be to “inform” publics in the West on the “dangers” posed by the Brotherhood.

Since he stood down as the British premier in 2007, Tony Blair has built myriad business interests around the world, many of which involve advising governments, dictators and high profile financial institutions. The complexity of his dealings make it a challenge to accurately estimate his earnings, although accounts published in January this year showed he has £13 mn deposited in the bank and various newspaper reports estimated his personal wealth at being around the £70 mn mark.

Much of his consultancy work advising governments on reform and providing guidance to multinational companies is done under the umbrella of Tony Blair Associates, which, according to the FT, “he sees a lot more business for…in this region [the Gulf]”. Previously, he has advised on reforming the prime minister’s office in Kuwait from 2009-12, during a time when the office holder Sheikh Nasser al-Mohammed al-Ahmed al-Sabah was forced to resign after mass protests called for him to step down due to allegations of corruption.

Blair still holds public office as the Middle East peace envoy representing the “Quartet”, comprising the UN, the EU, the US and Russia, a role in which he is charged with aiding mediation in the Israeli-Palestinian conflict and supporting the Palestinian economy. Recent comments distancing himself from the current crisis gripping Iraq, however, has led to increased calls for him to be removed from this job.

A letter signed by a number of former British ambassadors published Monday criticised his work on the peace process and role in the 2003 Iraq war.

“It is our view that, after seven years, Mr Blair’s achievements as Envoy are negligible, even within his narrow mandate of promoting Palestinian economic development,” said the letter that included the signature of former ambassador to Iran Sir Richard Dalton. “Furthermore, the impression of activity created by his high-profile appointment has hindered genuine progress towards a lasting peace.”

“We are also dismayed…at Tony Blair’s recent attempts to absolve himself of any responsibility for the current crisis [in Iraq] by isolating it from the legacy of the Iraq war,” the letter continued.

News of Blair’s investigation into the Muslim Brotherhood coincides with a British government review of the group’s operations, which has been criticised for being commissioned under the pressure of Saudi Arabia and the UAE. The review is being led by the former British ambassador to Saudi Arabia Sir John Jenkins and is due to be published sometime in July.

Saudi Arabia and the UAE have fiercely pursued a regional, and now global, initiative targeting the Muslim Brotherhood with both countries providing billions of dollars in financial aid to Egypt since backing a military coup that deposed the country’s first elected president Mohammed Morsi from power last July.

Under the auspices of their new president Abdel-Fatteh al-Sisi, Egyptian authorities have relentlessly cracked down on supporters of the Brotherhood and opponents of the military coup. More than 41,000 people have been detained, over 1,500 killed, and hundreds sentenced to death in a far-reaching clampdown over the past year, which has seen the group labelled a terrorist organisation by both Egyptian and Saudi governments.

Blair has publicly backed President Sisi, describing last year’s ouster of Morsi as the “necessary rescue of a nation”. Although some Gulf States are often accused of being autocratic by nature and of intolerance for dissent, Blair views the monarchs as “promoting the values of religious tolerance and open, rule-based economies”.

The FT report on Monday suggested his ties with the UAE’s leaders extend to advising the new Egyptian president, citing a source as saying “Abu Dhabi officials want Blair to help convince Sisi on economic reforms…Sisi can be impressed by Blair”.

A close working relationship between Blair the businessman, rather than in his role as peace envoy, and the Emirati rulers could prove key in efforts to smooth relations between the UAE and UK. The usually close relationship has soured somewhat over the past two years, with the FT saying Sheikh Mohammed is “steaming” with anger at the UK for granting Emirati dissidents political asylum and housing media outlets criticising the UAE for cracking down on a local reformist movement.

The UAE jailed 69 members of al-Islah, which has advocated democratic reforms in the Gulf State, on charges of sedition in a trial last year that prompted the ire of human rights groups who labelled it a “mockery of justice”.

There was a muted response on social media to news of Blair’s ties to the UAE monarchy, however those who did comment were swift to display their disapproval at the former premier’s close relations with the Emirati Crown Prince.

Blair and #UAE ruler MbZ "have chemistry" reports @simeonkerr - is that because together they give off poisonous gas? http://t.co/ZMPmLuFuZh

Blair looks to open Abu Dhabi office.Where I am sure he will advise "tolerant" gulf countries how to fight extremists http://t.co/SWMw5Xs2PV