SANAA - After 33-year-old Huda Abubakr awoke from surgery at the Republican Hospital in Sanaa, doctors requested she stay for a few days to recover from the operation. But Abubakr was adamant that she wanted to leave immediately, fearing that she might contract cholera from one of the many patients at the hospital.

"I can deal with the pain from the surgery, but I can't deal with the repercussions of contracting cholera," Abubakr told Middle East Eye.

"When I was about to enter the operating room, I wasn't afraid of the surgery itself but of picking up the infection," she said. "I don't want to end up dead like hundreds of others."

The war-torn country has been battling a significant cholera outbreak since mid-October. At least 471 people have died in the epidemic, according to World Health Organization (WHO) figures released on Monday, while the number of suspected cases stands at 51,832.

Being at hospitals is really dangerous nowadays. Cholera can literally affect anyone

Sanaa is controlled by Shia Houthi rebels and their allies, who have been fighting against the internationally recognised government of Abd Rabbuh Mansour Hadi. Hadi has been supported since March 2015 by a Saudi-led coalition.

While the Yemeni Ministry of Health, in collaboration with international organisations including WHO and UNICEF, set up camps towards the end of 2016 in al-Sabeen, a district in the south of the capital city, in order to help treat people affected by the infection, suspected cholera cases are still sent to the public hospital to get diagnosed.

This has caused other patients to be put at risk of coming into contact with the infection while at hospital.

"Doctors at state-run hospitals are doing their best to protect us from the outbreak, but people who've contracted the infection still come to get examined and end up infecting others. That is why I left the hospital as soon as I could," Abubakr told MEE.

Like many who have tried to avoid staying in hospitals across Sanaa, Abubakr decided to rely on a private physician to visit her at home for any follow-ups after her surgery.

Abdul Hakeem al-Kuhlani, a doctor and general manager of the cholera observation unit within the ministry of health in Sanaa, told MEE that patients across Sanaa had been advised to avoid hospitals which have become hubs for contracting the infection.

"I advise patients who can stay at home or delay their surgeries to do so," Kuhlani told MEE. "Being at hospitals is really dangerous nowadays. Cholera can literally affect anyone."

According to Kuhlani, state-run hospitals have become packed with cholera patients and new cases are continuing to arrive every day.

The WHO said on Monday that the average daily number of cases recorded between 21 and 27 May was 2,529.

Kuhlani told MEE that the ministry of health is coming up against many obstacles, ranging from the lack of medicine to the closure of health facilities, in its fight against the spread of the infection.

"There is a dire need for medicine to fight this disease," said Kuhlani. "But we depend on NGOs to provide us with these medicines because the government's supplies have become depleted due to the economic crisis."

"In addition to this, many health facilities closed their doors because of budget deficits which has exacerbated our suffering in the face of cholera."

Healthcare has deteriorated as a result of the war, with more than 14 million people in Yemen having no access to health services, the United Nations health agency said in March, warning that transportation of medical personnel and treatment for the injured had become increasingly difficult.

According to the WHO, only 45 percent of the country's health facilities remain fully functional and accessible and at least 274 have been damaged or destroyed during the conflict.

Furthermore, many doctors, who were already scarce in Yemen's rural areas, have deserted their jobs due to months of unpaid salaries since the start of the war.

These conditions have led to the spread of the disease to 19 provinces, mostly affecting Sanaa, Hajja, Imran, Ibb and al-Mahweet, according to Kuhlani.

The diarrhoeal infection is carried in food and water tainted by human faeces. Some severe cases can kill within hours unless treated with intravenous fluids and antibiotics.

Because cholera can be contracted through unclean food and water, Sanaa residents have been wary of eating at street food stalls or cheaper restaurants, where hygiene and cleanliness might not be at the highest levels.

This has led many people to avoid eating out and cooking at home instead.

"My wife and I work full-time, so we used to order a lot of takeout meals," Maher al-Qubati told MEE. "After the cholera outbreak, however, my wife resorted to cooking just so that we can stay safe."

Naif al-Silwi, the owner of a small restaurant in Sanaa called Wadi Moor, which is known for making traditional Yemeni dishes, told MEE that he was struggling to pay his rent and was contemplating closing it down if people’s perceptions of such restaurants continues to be negative.

"Cheaper restaurants are being perceived as unclean and their food as unsafe, but this is untrue," Silwi told MEE. "We've never heard of anyone contracting the infection after eating at one of those joints."

Silwi said that although he had taken several measures to keep his customers safe, such as adding chlorine to drinking water and covering the dishes during preparation, he was finding it difficult to persuade his customers to return to Wadi Moor.

He told MEE that many of his customers had stopped eating at Wadi Moor and have instead started either cooking at home or going to more expensive places.

Although more expensive restaurants are regarded by many members of the public as safer than food stalls, the majority of Sanaa's residents cannot afford to eat at high-end restaurants.

Cheaper restaurants are being perceived as unclean and their food as unsafe, but this is untrue

"I hope that the ministry of health works on shutting down any restaurants which prove to be contaminated so that customers start to come back to safe restaurants like mine," said Silwi.

Anwer Quaidel, a 42-year-old builder who still eats at Wadi Moor restaurant, told MEE that he does not feel at any risk of contracting the infection by eating at the restaurant.

"We should support the cheaper food joints because they help the poor by providing affordable food," Quaidel told MEE.

Silwi agreed: "Street food stalls and cheaper restaurants sell affordable meals and have helped provide food for thousands of poor people who have been struggling to access affordable food during the last years."

Quaidel believes that he could catch the infection from any place and not necessarily at a food joint.

"If I'm destined to contract cholera, I might pick it up off the rubbish on the streets which has been left lying around by the local authorities," he said.

Sanaa municipality employees went on strike in April to protest the late payment of their salaries. Since then, rubbish has accumulated across the streets in Sanaa as cleaners employed by the municipality have refused to go to work.

In addition to the provision of clean water and proper sanitation, health education and good food hygiene are important measures for fighting the spread of the infection, experts say.

Basic hygienic practices, including systematic hand-washing and the safe preparation and conservation of food are important ways to prevent contamination.

Prevention is better than remedy, so I use vinegar to safeguard my family

Because the infection can also be transmitted through contaminated produce, many families in Sanaa have started washing their fruits and vegetables in vinegar.

Following the advice of a family doctor, Naseem Jamal, a Sanaa mother in her 30s, has been using vinegar to wash her fruits and vegetables.

"Prevention is better than remedy, so I use vinegar to safeguard my family," Jamal told MEE. "Vinegar isn’t costly, but many people are careless and that's how they fall victim to this infection."

Kuhlani confirmed that "vinegar helps to rid fruits and vegetables of carrying cholera and make them safe to be eaten."

Jamal went on to advise children not to buy food from vendors situated next to piles of rubbish on the streets.

"Parents end up paying the cost of their children's carelessness and many times this carelessness is the very reason for their suffering," she said.

Abubakr, who left the hospital following her surgery to avoid contracting cholera, recounted that doctors had told her many children had fallen victim to the infection for neglecting their personal hygiene.

State-led newspapers and radio and TV channels in Yemen regularly send out public service announcements on how to avoid the spread of cholera.

"It is not easy to find a solution to outbreak of the cholera in Yemen. But prevention is easier than treatment so it's important for us to safeguard ourselves," Abubakr said. 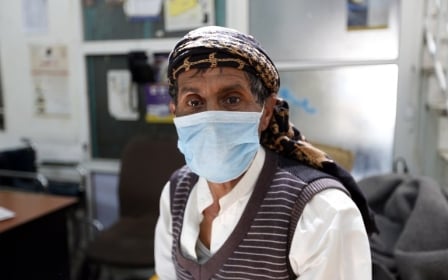