IS claims deadly attack on Italian consulate in Egypt

The bombing, killing one and injuring nine others, is the first attack on a foreign mission in two years of unrest across Egypt 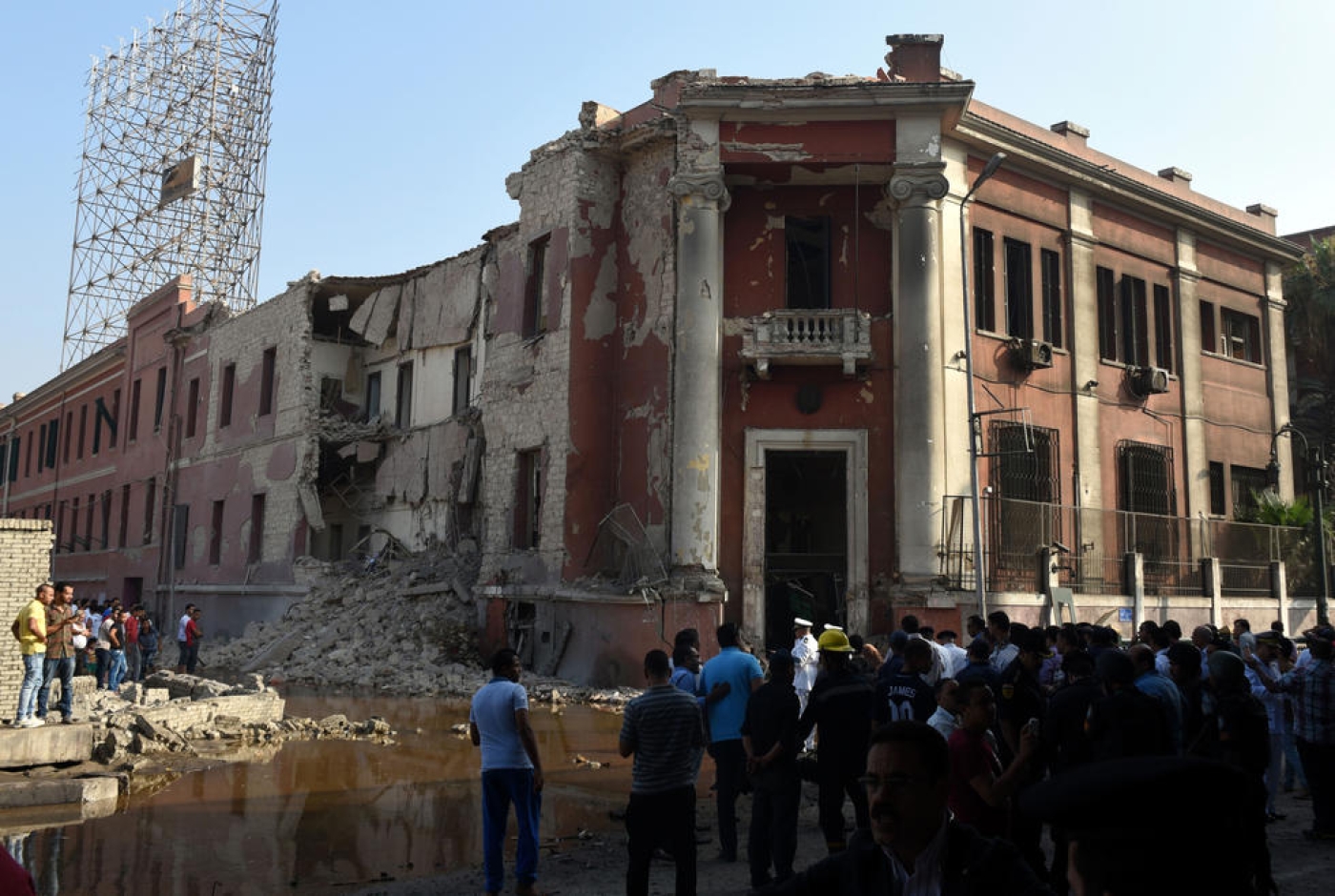 Egyptian security and citizens look at the the destroyed facade of the Italian consulate building following a powerful bomb explosion, killing one person, in the capital, Cairo (AFP)
By
MEE and agencies

The Islamic State group said it was behind a deadly car bomb attack on Italy's consulate in the Egyptian capital Saturday, and warned Muslims to stay away from such places, according to a monitoring group.

"Soldiers of the Islamic State in Cairo were able to detonate a parked booby-trapped vehicle laden with 450 kg (990 pounds) of explosives at the headquarters of the Italian consulate," the SITE Intelligence Group quoted an IS tweet as saying.

"We advise Muslims to stay away from these security dens, because they are legitimate targets for strikes of the mujahedeen," the statement added.

It was the first attack on a foreign mission in Egypt since militants began a campaign against the country's security forces two years ago following a crackdown on militants.

The early morning explosion was heard across the city and wrecked the facade of the building, part of a large complex that also includes a social club and a school.

The consulate, near a regularly busy street near the prosecutor's office and supreme court in central Cairo, was closed at the time of the explosion around 6:30 am (0430 GMT).

An MEE contributor who was at the scene of the blast said the timing and location of the bomb indicates that it was designed more as a message, rather than an attempt to kill the maximum number of people. The bomb, the contributor said, exploded on the opposite side of the consulate from where guards normally patrol.

"That's one of the most trafficked streets in Cairo during the day because there are microbuses and a bridge," he said by phone. "So if they wanted to kill people, they would have put it on the other side at any other time of day."

The mangled wreck of a vehicle was strewn on the street outside the consulate. Some 50 buildings in the area were damaged.

The Italian consul in Cairo arrived at the scene as condemnations poured in from Rome.

"Italy will not let itself be intimidated," said Foreign Minister Paolo Gentiloni in a tweet, adding that there had been no Italian casualties.

He later told a news conference that the consulate had been the intended target.

Italy's policies towards Egypt since President Abdel Fattah al-Sisi took power have been consistent with those of other European countries, leading some observers to believe the bombers were more interested in targeting a foreign complex more generally, than specifically attacking an Italian institution.

While most embassies are tightly guarded in Cairo's Zamalek and Garden City neighbourhoods, the Italian consulate, located the city's centre, would have been an easier target.

The blast, reportedly caused by a car bomb, brought down part of the building, and the remains of at least one vehicle were strewn on the street. A small wooden police kiosk outside the consulate was completely destroyed.

Diplomats had told AFP they had been warned by police months ago that embassies could be targeted, but it was not clear whether this was based on specific intelligence. At least one Western embassy had relocated over security concerns.

"We intend to respond firmly but also soberly... without alarmism," Gentiloni added.

Prime Minister Matteo Renzi spoke to Egyptian President Abdel Fattah al-Sisi and said the two countries will stand together "in the fight against terrorism and fanaticism".

Militants have carried out scores of attacks since the army, then led by Sisi, overthrew Islamist president Mohamed Morsi in July 2013. Militant attacks have killed hundreds of policemen and soldiers, mostly in the Sinai Peninsula.

Diplomats had told AFP they had been warned by police months ago that embassies could be targeted, but it was not clear whether this was based on specific intelligence.

At least one Western embassy had been relocated over security concerns.

The attack was also denounced by EU foreign affairs chief Federica Mogherini and France, as both expressed solidarity with Egypt.

"Once again Egypt is under attack, once again Europeans have been hit by terrorists," Mogherini said in a statement.

"We stand by the Egyptian authorities in their efforts to fight terrorism and bring the perpetrators of this attack to justice."

Militants have carried out scores of attacks since the army overthrew democratically elected president Mohamed Morsi in July 2013, killing hundreds of police officers and soldiers, mostly in the Sinai Peninsula.

Saturday's attack came less than two weeks after suspected militants assassinated the country's top prosecutor in a car bombing in the capital.

In Sinai, militants loyal to the Islamic State group in Iraq and Syria launched a wave of attacks on 1 July that killed at least 21 soldiers.

The Islamic State group, which controls parts of Iraq and Syria, has called on its affiliates elsewhere to attack Western targets.

Last week's attacks had prompted Sisi to pledge tougher laws with the cabinet set to approve a controversial anti-terrorism law that sparked an uproar among journalists and rights activists.

Several foreign journalists reported on Twitter that Egyptian police stopped them while they attempted to report from the scene of the bombing, but said they were later released.

Some observers on social media suggested that officials may use the attack as justification for the law's passage.

Sisi, the former army chief turned president, has overseen a crackdown against those opposing his popularly backed June 2013 military coup, which has seen at least 1,400 people killed.

Thousands have been jailed, including secular dissidents, and hundreds sentenced to death in mass trials, although most have won retrials.

The crackdown had initially brought international pressure, especially from the EU, on Sisi which has largely given way to support as he positions himself as a front line opponent of regional militancy.