The pandemic has become an unexpected blessing for Egyptian agriculture, a long neglected sector of the economy 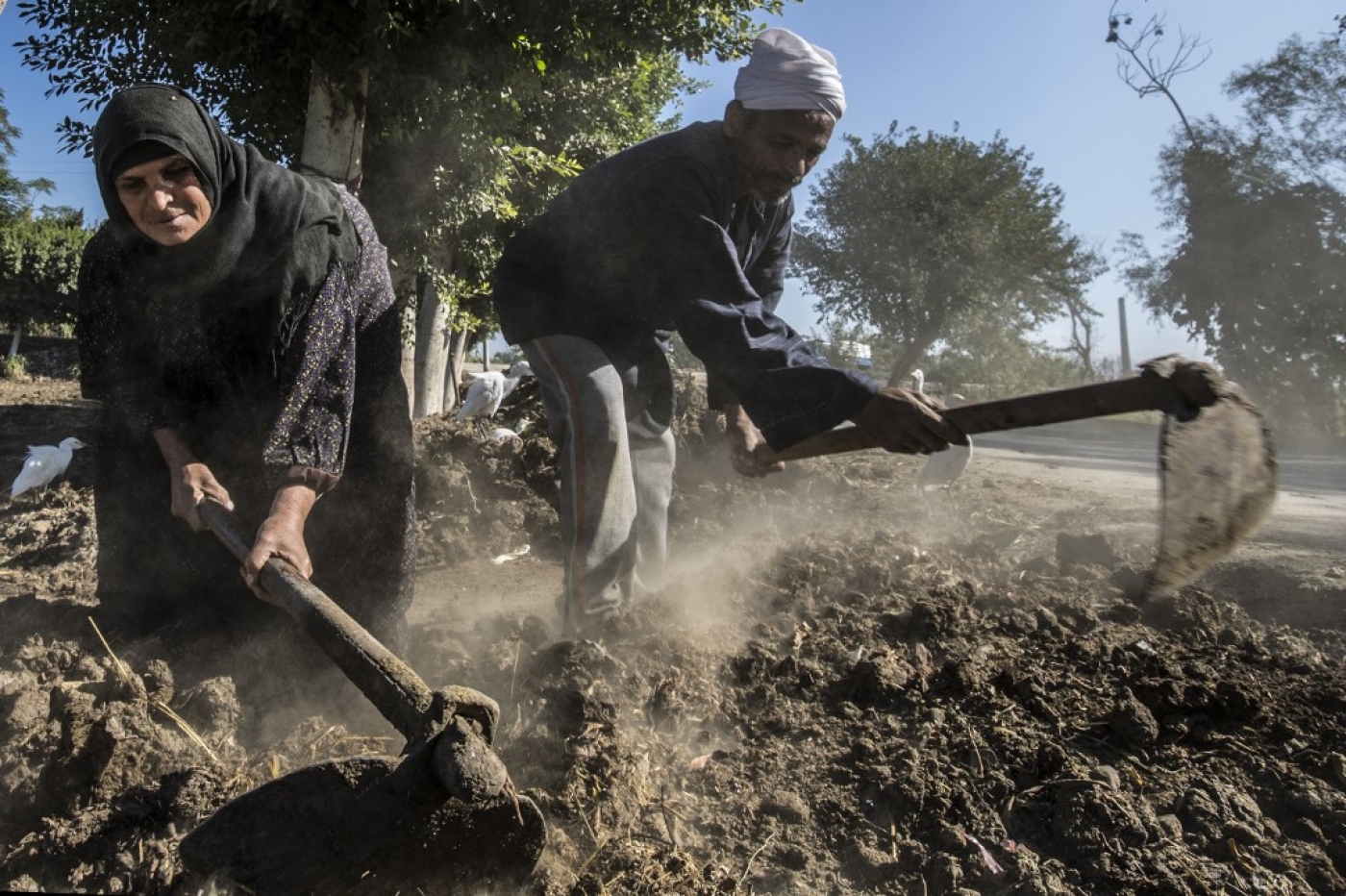 Egypt hopes the rise in agricultural exports, which contribute 10-15 percent of national income, will compensate for the loss of revenues from other sources (AFP/file photo)
By
Amr Emam
in
Cairo

Mohammed Mahmoud looked expectantly at the vast expanse of onions in front of him. The crop has ripened and the octogenarian farmer is keen to harvest them.

As he watched his fellow farmers preparing to pick the grown bulbs on his 22-acre farm in Sarabium, a village of the northeastern Egyptian city of Ismailia, near the Suez Canal, he hoped they would finish their work soon.

"The traders are already waiting to come and get the harvest," he told Middle East Eye. "There is a growing demand for onions these days."

Thousands of other farmers across Egypt have started harvesting their crops as well.

They are part of the local supply chain of a commodity that is experiencing a surge in demand.

The agriculture sector in Egypt, which has suffered neglect over many decades, has found a silver lining in the coronavirus pandemic.

The disease outbreak has disrupted the supply chain around the world, with major producers finding it either difficult to send their crops to foreign markets or unable to satisfy demand in local markets.

This has opened up a window of opportunity for Egyptian agricultural products in foreign markets, including those that were difficult to enter in the past because of fierce competition with products from other countries. Until mid-May, Egypt exported three million tonnes of vegetables and fruit to other countries, including 210,000 tonnes of onions, according to Minister of Agriculture Al-Sayed al-Qoseir.

This is a little more than 50 percent of Egypt's overall agricultural exports last year, which is quite an achievement for a country whose economy has been hit hard by the coronavirus pandemic.

"Agricultural exports are witnessing unprecedented growth," Mohammed al-Qersh, the official spokesman of the Ministry of Agriculture, told MEE. "The growth boils down to a series of measures we took in the past months."

The measures included a tight supervision on the farms, solving some of the problems that hindered the export of agricultural goods in the past and an aggressive marketing policy for Egyptian crops.

Workers at the nation's exit points, including seaports and airports, raced against time to handle demand for local vegetables and fruits.

This demand is manifested in the decision of Egyptian authorities to use passenger planes in the transfer of agricultural exports to foreign markets in the Arab Gulf, the United States, Asia, and Australia.

The same demand promises to make up for the economic losses Egypt is sustaining because of the coronavirus outbreak, economists said.

"This demand motivates production, including at the nation's farmlands," Gamal Seyam, a professor of agricultural economics at Cairo University, told MEE. "This production also creates demand for an endless list of things, including agricultural labour."

The rise in the number of the jobless coincided with the closure of schools, shopping malls, and tens of thousands of outlets, including coffee shops, because of the coronavirus.

Over a quarter of Egypt's workforce of 29 million works in agriculture.

Egypt is witnessing a spike in Covid-19 infections and deaths, even as health authorities fight tooth and nail to contain the virus.

On 30 May, Egyptian authorities made the wearing of face masks mandatory for members of the public at administrative offices, banks, on public transport and inside supermarkets.

The country's scientific research institutes expect the infections and deaths to reach their peak by the end of June and then start declining in July.

The virus outbreak has had a heavy toll on the Egyptian economy. Apart from the loss of jobs, the disease has led to the suspension of production at a large number of factories and production sites.

"The pandemic has very negatively affected most of the sources of national income," Seyam said.

The tourism sector, which used to bring in around $1bn in revenues every month, has been halted for the last two months. Last week, Egypt started easing some restrictions on the sector, with hotels allowed to open and operate at a reduced occupancy rate of 25 percent.

Non-oil exports rose by two percent in the first quarter of 2020, but a continuity of this trend is far from certain, given the international economic slowdown.

Foreign currency reserves at the central bank are falling and Egypt has resorted to borrowing from the International Monetary Fund (IMF).

The Egyptian economy was forecast to grow by 5.6 this fiscal year, which will end in June.

However, some international institutions, including the IMF, expect the growth rate to come down to two percent because of the pandemic.

Yet, Egypt expects to have more demand for its agricultural produce in the coming period, especially in the absence of an end to the coronavirus in sight.

The country hopes the rise in exports from the agricultural sector, which contributes between 10 percent and 15 percent of national income, will compensate for the loss of some revenues from other sources.

To stimulate a growth in exports, Egypt is searching for new markets. This year it exported oranges to Uzbekistan for the first time.

Egypt exported 1.7 million tonnes of oranges to other countries in 2019, becoming the world's largest exporter of the citrus fruit for the second year in a row.

Egyptian authorities have been offering unlimited support to the agricultural sector since the beginning of the coronavirus crisis.

They exempted trucks carrying agricultural crops or farming workers from the nighttime curfew that was imposed around the country on 25 March. Agricultural crops packaging stations have also been exempted.

'We take the examination of the crops before export very seriously'

In December last year, the Central Bank of Egypt included agricultural production companies in a new financing initiative that offers these companies loans with low interests.

Meanwhile, the country has been implementing a strategy aiming at increasing the competitive edge of its crops in foreign markets since 2017.

It tracks export crops at the different stages of their growth, including by giving technical tips to the farmers, and at packaging stations.

Before export to foreign markets, samples of export crops are examined at exit points to ensure that they go hand in hand with quality standards in export markets.

"We take the examination of the crops before export very seriously," said Ahmed al-Attar, the head of the Agricultural Quarantine Department, which examines agricultural exports before exit and imports before entry.

"Our department has a list of international quality standards it follows strictly to ensure that our agricultural products will enter foreign markets."

Mahmoud, the farmer, benefits from the Ministry of Agriculture's offers to farmers to increase the chances of their harvest travelling to other markets.

A specialist gives him tips every month on the best practices to look after his crops and grow them.

This year, his farm will produce between 14 tonnes of onions and 30 tonnes of olives.

"We give special care to the plants at every stage to ensure that the traders will not reject them," Mahmoud said. "They then sell them to the export companies, which benefits everybody in this chain." 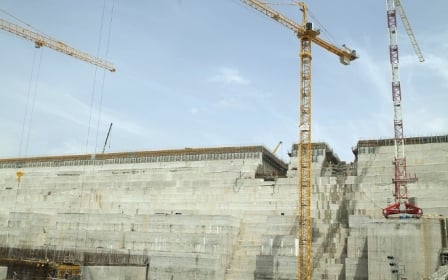