Foreign ministry says the sanctions, which are part of Washington's 'maximum pressure' campaign, are impeding Tehran's fight against Covid-19 Iran's foreign ministry has urged the international community to ignore US sanctions and help the country in its fight against the coronavirus pandemic.

Abbas Mousavi, a foreign ministry spokesman, also pressed Washington to temporarily lift its sanctions on Tuesday after the Islamic Republic recorded 133 deaths from the virus overnight, bringing the country's total death toll to 3,872.

"We have conveyed a message to all countries and to American officials to denounce the embargo measures which are unjust and illegal, and which should be suspended under these conditions," Mousavi said in a statement. "We call on all countries of the civilised world not to apply the inhumane, unlawful and unjust measures," he added.

The hardest-hit country in the Middle East, Iran has recorded more than 60,000 confirmed cases of the coronavirus, known officially as Covid-19.

While the Trump administration has said there are no sanctions on medicines or humanitarian assistance going to Iran, many banks and companies have refrained from taking part in any such ventures out of fear of getting caught up in US secondary sanctions.

Several US politicians, rights groups, and activists have also called on the administration to temporarily lift its sanctions, following in the footsteps of China and Russia.

However, the Trump administration has repeatedly shown no interest in easing its "maximum pressure" campaign, and last month piled new sanctions on the country.

The US unilaterally launched its "maximum pressure" campaign in 2018 after withdrawing from the Joint Comprehensive Plan of Action (JCPOA), otherwise known as the Iran nuclear deal, which was signed by the US; Iran; France; Germany; the UK; the European Union; China; and Russia in 2015.

According to Human Rights Watch, the sanctions have devastated Iran's flagging healthcare system, hindering the ability for ordinary Iranians to access health care.

Sanctions have also more broadly impacted Iranians by closing down private businesses and forcing the value of Iran's currency, the rial, to plummet.

Meanwhile, in the US, coronavirus cases continue to increase at a staggering rate. There are currently 369,000 confirmed cases and nearly 11,000 deaths, according to numbers collated by Johns Hopkins University. 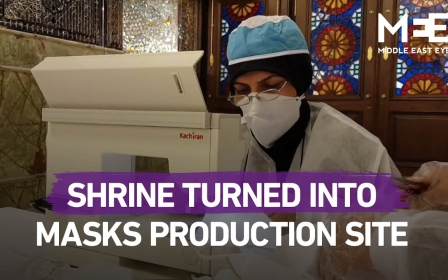 Coronavirus
Iran says it will never ask US for help over coronavirus as cases pass 60,000