Worshipers perform Isha prayer while keeping distance between them next to the Kaaba in Mecca's Grand Mosque, Islam's holiest site on 27 April 2020 (AFP)
By
MEE and agencies

Saudi Arabia may drastically cut down the number of pilgrims it allows to undertake the Hajj pilgrimage this year as it struggles to contain coronavirus, sources familiar with the matter told Reuters on Monday.

Around 2.5 million pilgrims flock to Mecca and Medina every year for the pilgrimage expected of every Muslim once in their lifetime. Hajj and the lesser Umrah pilgrimage earn Saudi Arabia some $12bn a year, according to official data.

However, the kingdom has suspended Umrah and asked people to put plans for Hajj – expected to start in late July – on hold. 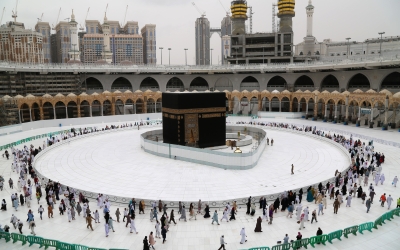 The number of confirmed cases in the country has topped 100,000, and the port city of Jeddah, through which many pilgrims pass on their way to Mecca, has been placed under a 15-day lockdown after a spike in infections.

The kingdom is currently considering allowing "only symbolic numbers" this year, two sources told Reuters, in addition to extra health checks and restrictions that include a ban on older pilgrims.

Each year, countries get a quota for how many citizens are allowed to make the holy trip, to ensure fair distribution.

This year, Saudi authorities believe that the additional stringent steps might make it possible for the kingdom to receive up to 20 percent of each country’s quota of pilgrims, Reuters has learned.

Some officials are still pushing for a cancellation of Hajj, the three sources said.

While Hajj has been cancelled in the past over war or epidemics, it has not happened since the Kingdom of Saudi Arabia was founded in 1932.

Limiting or cancelling Hajj will further strain the government’s finances, following a plunge in oil prices and loss of revenues due to lockdown measures put in place to fight the coronavirus. Analysts predict a severe economic contraction this year. 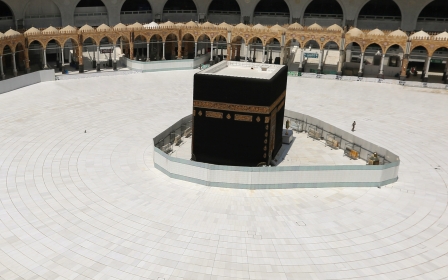