Relieved to be back in their hometowns, thousands of people in northwest Syria now face a potential new crisis Much of Abu Khaled’s home is in ruins.

The concrete house sits in Binnish, a town east of northwestern Syria’s Idlib city that had been under deadly Syrian and Russian fire, with air strikes and artillery shelling raining down on its residential neighbourhoods.

One shell tore straight through Abu Khaled’s living room, he says. Piles of concrete rubble and pipes splayed out from the ceiling are all that is left behind of the room.

In early February, at the height of the bombing that was tearing apart much of Syria’s opposition-held northwest, Abu Khaled bid farewell to the house. He, his wife, and their eight children settled in an unfinished apartment in Idlib city, just a few kilometres down the highway.

It was far enough from the epicentre of the bombing to feel safe for a while.

But there was little else to sustain the family. They could not afford heating in the midst of a bitterly cold winter, and received no aid supplies, he says.

A month later, a ceasefire was brokered between Russia and Turkey and has largely held since. It has been one of the longest periods of respite for Idlib’s residents since a devastating government and Russian bombardment campaign was launched one year ago.

Abu Khaled chanced a return to Binnish to find only the kitchen and a bedroom remaining of his house – but at least the skies are quiet.

A former construction worker, he’s using the relative peace to haul away the rubble in his living room and start building new walls.

Some 185,000 people have returned to their hometowns in opposition-held rural Idlib and Aleppo provinces since the start of the ceasefire early last month, according to the Response Coordination Group, a locally run organisation.

They are returning from poorly serviced camps huddled along the Turkish border, where families shelter in threadbare tents, unfinished rental apartments, or simply out in the open under piles of blankets.

Those who have returned home are still less than one-fifth of the million people who packed their belongings into trucks and fled to the border camps in December and earlier this year, seeking safety from the Syrian government and Russian bombs.

Nevertheless, their return is notable.

For returnees, life in bombed-out homes is easier than in the camps.

“The camps are too crowded and they lack people’s needs for daily life.”

Ramadan during the coronavirus pandemic

Outside Abu Khaled’s house, streets that were largely deserted by displaced residents just over a month ago are now filled with families shopping for groceries and eating meshawi, grilled meats, on the sidewalks.

Some were busy buying sweets ahead of the holy month of Ramadan, which began Friday.

Umm Ali, a widow who recently returned home from a makeshift displacement camp with her five children, says she has begun gathering with her friends and neighbours again for morning coffee.

Still, it is an uneasy return to normal. Many returnees are now jobless after bombardments devastated the town before the ceasefire. Others fear the bombs will inevitably return.

And residents are filling local shops despite warnings from doctors and aid workers that the novel coronavirus could soon explode across opposition-held northwestern Syria.

So far, there are no recorded cases in Idlib or neighbouring areas of rural Aleppo that remain in rebel hands, though 42 people have so far been reported infected with the virus elsewhere in government-held territory.

There are limited intensive care beds and ventilators in northwestern Syria should the virus reach the overcrowded displacement camps, or towns like Binnish.

In Binnish, returnees who spoke to Middle East Eye said they weren’t worried quite yet.

Among them is Ibraham al-Barakat, a father of three who moved back home to Binnish with his family in recent weeks.

The family had been renting out an unfinished apartment in Sarmada, a town near the Turkish border home to a number of makeshift displacement camps.

They found Sarmada bitterly cold and there were no work opportunities for Barakat to continue paying rent.

“We’re just happy to be back home now,” he says.

He has since returned to his former job of selling household cleaning products in a local market. The restaurants and other businesses around him have yet to shut their doors due to the coronavirus pandemic.

At times, loud noises still scare his youngest children, Barakat says. But the family is hoping for some semblance of a newfound peace. He and his wife had prepared Ramadan sweets for their children.

“We’ve moved on from destruction and death.”

But there are signs of concern in some corners of the town. Aziz al-Asmar is an artist from Binnish, known among residents for his murals depicting the events of Syria’s war. They adorn the crumbled walls of concrete apartment blocks damaged by air strikes and artillery fire.

In one, an unseen person’s hands hold a seemingly wounded baby, beneath the word “war” painted in black. The remainder of the wall has been blown away, with metal bits of rebar fraying into what was once a first-story apartment.

The 47-year-old’s murals have changed their tone in recent weeks. Across Binnish there are now paintings related to the coronavirus beside older depictions of the bombs that once ravaged the town.

One mural shows the virus’ crown-like spikes sticking out from a man’s head, next to writing criticising the UN and the international community for its humanitarian response. Another warns residents: “Syria isn’t safe” from the virus.

“Most people are being reckless, maybe because it’s impossible to stay at home in these conditions without going out to work, to [earn enough income] for daily necessities.”

The 44-year-old lives with his wife and aging mother in Binnish, after returning home from the border camps last month. Life in the camps was difficult, he says.

When they saw that the ceasefire seemed stable, the family of three decided to try their luck back home. Upon their arrival, they found their house bombed out and damaged.

'The tent could no longer serve as a home, or as a replacement for living in our own house in our own hometown'
- Abu Bassel, a former IDP

Just one room sits unscathed. That’s where the family has set up their remaining belongings. For them, it’s still better than the cramped tent in northern Idlib.

“The tent could no longer serve as a home, or as a replacement for living in our own house in our own hometown.”

Unlike Abu Khaled, Abu Bassel is not working to remove the debris left behind in his house. He doesn’t have enough money yet to work on home repairs, despite starting work in recent weeks at a relative’s clothing store. Instead, he is temporarily covering the former walls of his home in plastic, in the hope that someday he can afford to rebuild.

Abu Bassel isn’t sure when that could be. For him and others in Binnish, there is the looming fear that warplanes could come again soon.

Asked whether the family fears the coronavirus more or the return of government and Russian bombs that sent one million people fleeing their homes just months ago, Abu Khaled is clear: “We’re afraid of the bombs.

“The bombs and displacement have already made us suffer before.” 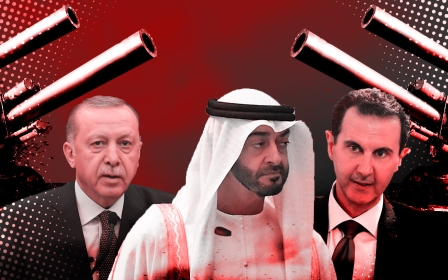