PA president Mahmoud Abbas stands with Mohammed Dahlan, a strongman from the Fatah party in Ramallah in 2007 (AFP)
By
MEE staff

The Palestinian president and exiled politician Mohammed Dahlan were both in Cairo on Sunday in an apparent Egyptian effort to broker internal rifts within their political party, according to local media.

Mahmoud Abbas and former Fatah strongman Dahlan reportedly met separately with Egyptian officials, with Dahlan said to have expressed a willingness to resolve divisions within Fatah, according Egyptian daily Youm7.

Fatah has been plagued by internal differences for many years, largely as a result of the breakdown of the relationship between Dahlan and Abbas. The UAE-based Dahlan has been accused of plotting against Palestinian President Abbas, who in turn has been accused by Dahlan of nepotism and corruption.

In recent months, analysts have said that the tensions within Fatah have escalated. This has been put down to the party losing West Bank university elections in April. The strains, wrote analyst Adnan Abu Amer for Al-Monitor, often fall along Abbas-Dahlan ranks.

On Sunday, one of Dahlan’s close confidantes, who asked to remain anonymous, told Youm7 that Dahlan “welcomes any effort under the auspices of Egypt to restore internal unity by creating a consensus in order to prevent the collapse of the Palestinian [national] activity".

Abbas agreed “to silence Fatah’s critics and those who are working to weaken the party," sources told Youm7.

Abbas also met with Egyptian President Abdel Fattah al-Sisi on Sunday, and reportedly thanked him for Egypt’s “continuous efforts to support the Palestinian people, especially those in the Gaza Strip".

Once a leading Fatah figure who headed Gaza’s powerful security apparatus, Dahlan fell from grace in June 2007 after Hamas expelled his party from the coastal enclave.

Relations between Dahlan and Abbas soured after the latter, backed by Fatah’s central committee, expelled Dahlan from the party in May 2011, forcing him into exile. He now lives in Abu Dhabi.

A corruption court in Ramallah in 2011 charged Dahlan with allegations of financial corruption and murder but he was found innocent in April this year.

Dahlan’s lawyers have long accused the Palestinian leadership, with Abbas at its head, of using the courts “for purely political ends”. 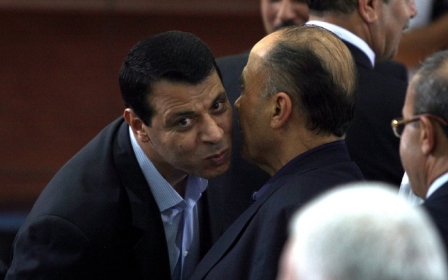