Gaza demonstrations for the 'right of return' continue for ninth week 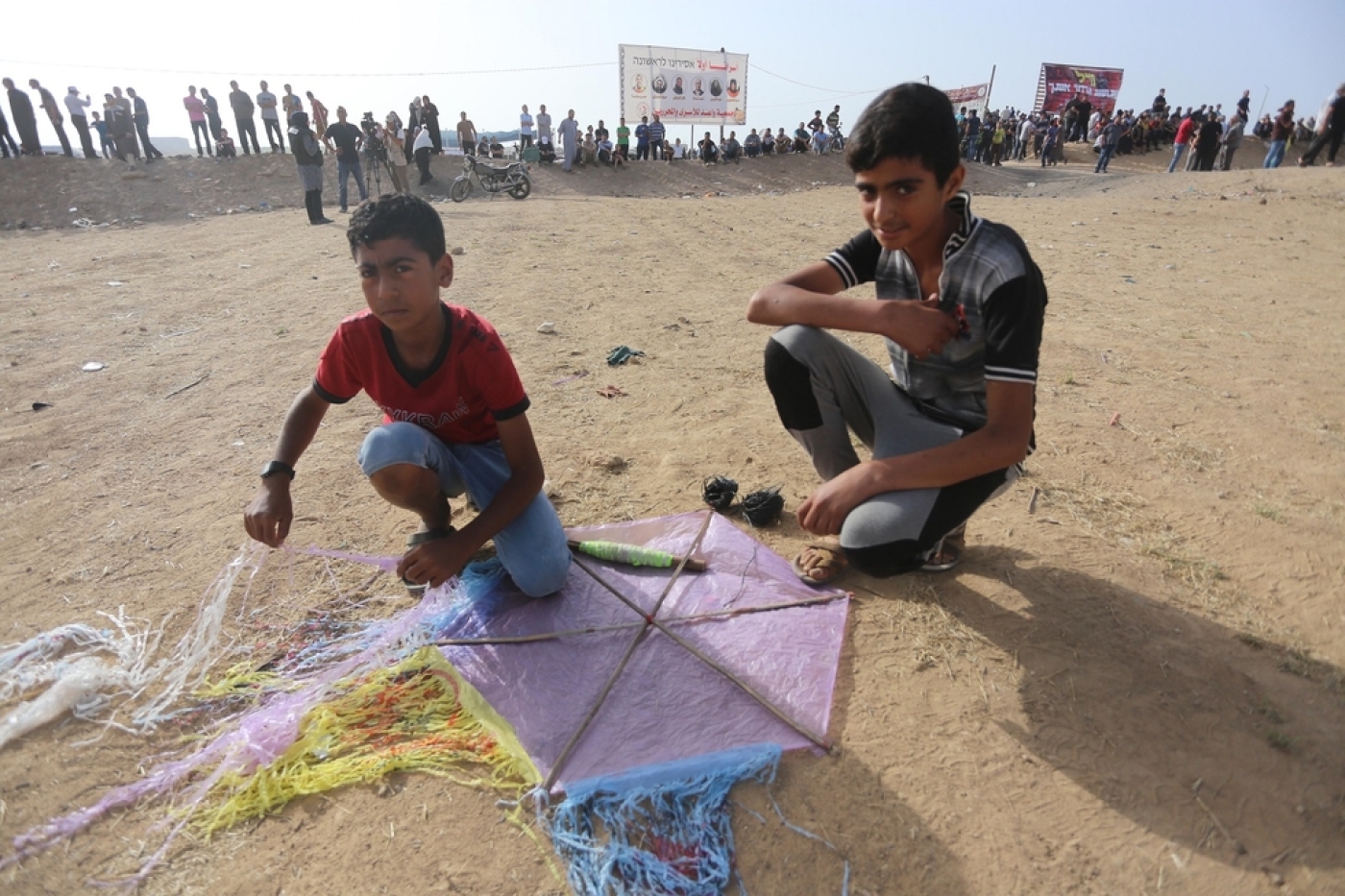 "Just like my kite I want to fly to my homeland over there," 13-year-old Belal says (MEE/Mohammed Asad)
By
Maha Hussaini

Gaza City - For the ninth week in a row, thousands of Palestinians continue to protest across the Gaza Strip, demanding their right of return to their ancestral villages and towns that they or their families were forced to flee in 1948.

The demonstrations are being held in five different locations, where camps were set up about 600 metres from the eastern fence erected by Israel.

The “Great Return March” protests, which kicked off on 30 March, was planned to last for only seven weeks - from "Land Day" to 15 May, when Palestinians commemorate the Nakba or "catastrophe" of their displacement.

But they did not stop. “Continuing despite the Siege Friday” marked the ninth week of protests.

Belal Yassin, 13, said he has been attending the demonstrations daily since they started to fly colourful kites that “prove Palestinians are only seeking freedom”.

“Just like my kite, I want to fly to my homeland over there,” said Yassin. “I come here with my cousins as soon as we wake up. We are currently on summer break, but even during exams, we used to come daily after studying.

“My parents are afraid I will get shot, especially since many of my friends and relatives were injured during the past few weeks, but they have never prevented me from coming or urged me to stay away from the fence.”

Abdulkhaleq Jarada, 45, said despite fears for his family, he still attends the demonstrations every Friday with his wife and children to “instill the right of return in their minds and hearts".

His 19-year-old son, Ibrahim, who studies engineering at university, thinks the protests are Palestinians’ last hope after wars and negotiations failed to bring them justice.

“Hundreds are getting killed and injured every day, but can you convince them to stop what they are doing?” said Ibrahim. “I do not know of any nation that did not struggle and sacrifice blood for dignity, before it could regain its self-determination.”

According to the Palestinian Ministry of Health, 115 Palestinians have been killed, and 13,300 others hurt since the protest began.

The humanitarian situation in the Gaza Strip, which deteriorated after the imposition of the Israeli blockade in 2007, has reached unprecedented depths in the past few months.

Almost 80 percent of the two million residents of the Gaza Strip rely on international and humanitarian aid, and the unemployment rate is more than 50 percent among youth - the highest in the world, according to Oxfam.

With residents of the coastal enclave receiving less than six hours of electricity a day, essential services like health care and sanitation are lacking in many areas.

Almost 22,000 Palestinians (about 4,162 families) are still internally displaced and living in “precarious conditions”, four years after Israel’s war on the Gaza Strip, according to the United Nations Office for the Coordination of Humanitarian Affairs (OCHA).

“The situation in Gaza is undoubtedly suffocating. We can barely afford daily essentials and are not even able to live a normal life due to severe Israeli restrictions, but this is not why we are here today,” Musaab Ashour, 21, told MEE.

“Even if the Israeli occupation lifts the siege on Gaza, we will continue to protest until we return to our occupied lands. It is not about sealed borders or collapsing economy; it is about the reason that caused us all this suffering - the occupation.”

Mahmoud Abuataya, 25, said he and his friends will not stop demonstrating, despite being injured on the first day of the protests.

“They do not care if we are unarmed. You can see they are shooting randomly at everyone, including children and journalists,” he said.

Earlier this month, the UN General Assembly’s Committee on the Exercise of the Inalienable Rights of the Palestinian People condemned “the excessive and disproportionate use of force by Israeli security forces against peaceful Palestinian demonstrators at the Gaza fence with Israel".

It also demanded that “that the occupying Power abide by its obligation to protect civilians under its control, in accordance with international law, international human rights and humanitarian law".

Idlat al-Sheikh, a 35-year-old media lecturer at the Al-Aqsa University of Gaza, said the international community and world governments left Palestinians with no choice but to rely on themselves to get what they have been calling for since 1948.

“We [women] come here to stand by our fathers, husbands, brothers, and sons. The Palestinian woman has always been present in the field alongside the man since the first Intifada,” al-Sheikh told MEE.

Al-Sheikh slammed the media for not covering the peaceful protests until people were killed.

“It is sad that hundreds have to die and get hurt every day in order for the media to cover our struggle,” she said.

“The world has left us in utter darkness for the past 70 years; they do not have the right to extinguish our last flame now,” al-Sheikh said.