An influential Emirati professor and Twitter personality accused a women’s rights activist detained in Saudi Arabia last week of being an ‘agent of Qatar’ and heading a monitoring cell.

The activist, Lojain al-Hathloul, is a notable Saudi Arabian human rights defender who was among 11 women's rights campaigners arrested over the past week in the most recent crackdown in the kingdom.

The Saudi government accused the women's rights activists of engaging in "suspicious contact" with foreign entities and offering financial support to "enemies overseas".

Abdulkhaleq Abdulla, a social media figure who regularly tweets in support of Saudi Arabia and the UAE, claimed that a Qatari plan to target Saudi security had been uncovered in leaked documents.

The plan was “revealed”, Abdulla wrote, after the Saudis uncovered a “cell aimed at attacking the safety and security of the Saudi people". He did not provide any evidence to support the claims.

Translation: How could you Lojain

Abdulla also claimed that Hathloul was the head of the cell, calling her one of “Qatar’s evil arms", and said that she had recruited people working in sensitive government positions, as well as giving financial aid to figures threatening Saudi Arabia's security.

Since the arrests, human rights campaigners have highlighted the disparity between the kingdom's newly announced set of modernising reforms, including allowing women to drive, and the arrest and mistreatment of the activists.

Samah Hadid, Amnesty's Middle East director of campaigns, said on Monday: "It is clear that underneath all the PR hype and spin, Crown Prince Mohammed bin Salman's reforms exclude human rights activism... We continue to call for the immediate and unconditional release of all activists still being detained solely for their human rights work."

Hathloul was previously detained at least twice for her activism. Before her first arrest in 2014, Hathloul had attempted to drive into Saudi Arabia from the UAE in defiance of Saudi Arabia’s ban on female drivers.

Hathloul and the others have been branded as "traitors" by government-aligned media outlets over the past week and reportedly could face the death penalty.

A Saudi activist, who wished to remain anonymous for safety reasons, told Middle East Eye: "The kind of reporting we see in the national media inside Saudi Arabia is aimed to quiet dissent inside, and to incite terror inside anyone who was inspired by these women.

The activist mentioned that even participating in other events, such as UN-supported reviews, can get people into trouble with the Saudi government.

“Lojain in February participated in the review of Saudi Arabia, and she was tweeting the proceedings of the meeting on her social media account and just a few weeks after [that] she was arrested," the activist said.

“What we are seeing is that there is no tolerance of any kind for [this] type of activity,” the human rights supporter added. 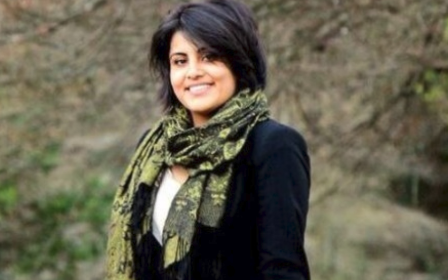