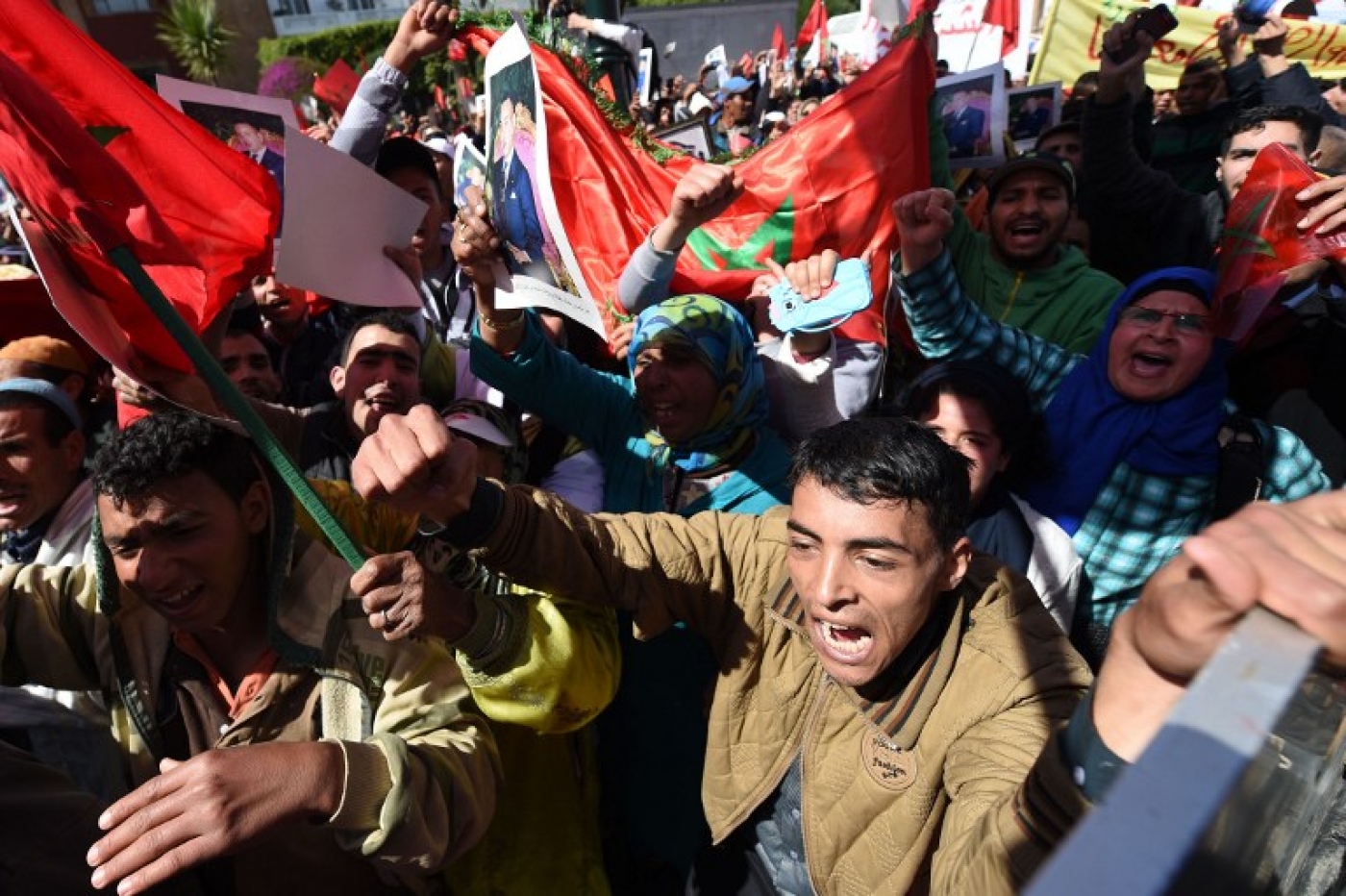 Moroccan protesters in capital Rabat, on 13 March 2016, chant against comments made by ~UN chief Ban Ki-Moon (AFP)
By
AFP

The UN Security Council on Friday voted to restore the UN mission in disputed Western Sahara but was divided over the steps demanded from Morocco to bring the peacekeeping force back to full operations.

A US-drafted resolution was backed by 10 countries in the 15-member council. Venezuela and Uruguay voted against the measure, while Russia, Angola and New Zealand abstained.

Morocco last month expelled dozens of civilian staffers from the MINURSO mission in angry retaliation over Secretary-General Ban Ki-moon's use of the term "occupation" to describe the status of the territory it claims as its own.

Extending the mandate of MINURSO for a year, the council emphasised in the resolution "the urgent need" for the mission to return to its "full functionality".

Several council members said the resolution was not firm enough toward Morocco by setting a three-month deadline for Ban to report on whether the mission is running at full capacity.

If the dispute remains unresolved after three months, the council will "consider how best to facilitate achievement of this goal," according to the resolution.

Angolan Ambassador Ismael Gaspar Martins said the council should have demanded that the mission be restored "immediately and without pre-conditions" and described the resolution as "biased".

French Ambassador Francois Delattre defended the measure, calling it "balanced" and saying "the goal is now to create the conditions that will lead to a return to a calmer climate" for talks on restoring the mission.

The resolution was adopted after weeks of tense debate at the council over how to address the crisis that threatened to set a dangerous precedent for UN peacekeeping.

China, Britain, France, Spain and the United States backed the resolution along with Ukraine, Japan, Egypt, Malaysia and Senegal.

UN diplomats warned that governments unhappy with a UN presence in their countries, such as the Democratic Republic of Congo and Sudan, were watching the council's response.

US Ambassador Samantha Power noted that negotiations on the resolution had been "challenging and contentious. That is an understatement."

Morocco maintains that Western Sahara is an integral part of the kingdom despite a UN resolution that tasks MINURSO with organising a referendum on self-determination.

MINURSO was established in 1991 after a ceasefire ended a war that broke out when Morocco sent troops to the former Spanish territory in 1975 and fought Sahrawi rebels of the Algerian-backed Polisario Front.

The resolution expressed regret that "MINURSO's ability to fully carry out its mandate has been affected as the majority of its civilian component, including political personnel, cannot perform their duties within MINURSO's area of operations."

"These people were expelled in two days, they can come back in two days. Why three months? We blame France for this," said Boukhari.

Morocco's Ambassador Omar Hilale said his government "takes note" of the council resolution and will study it.