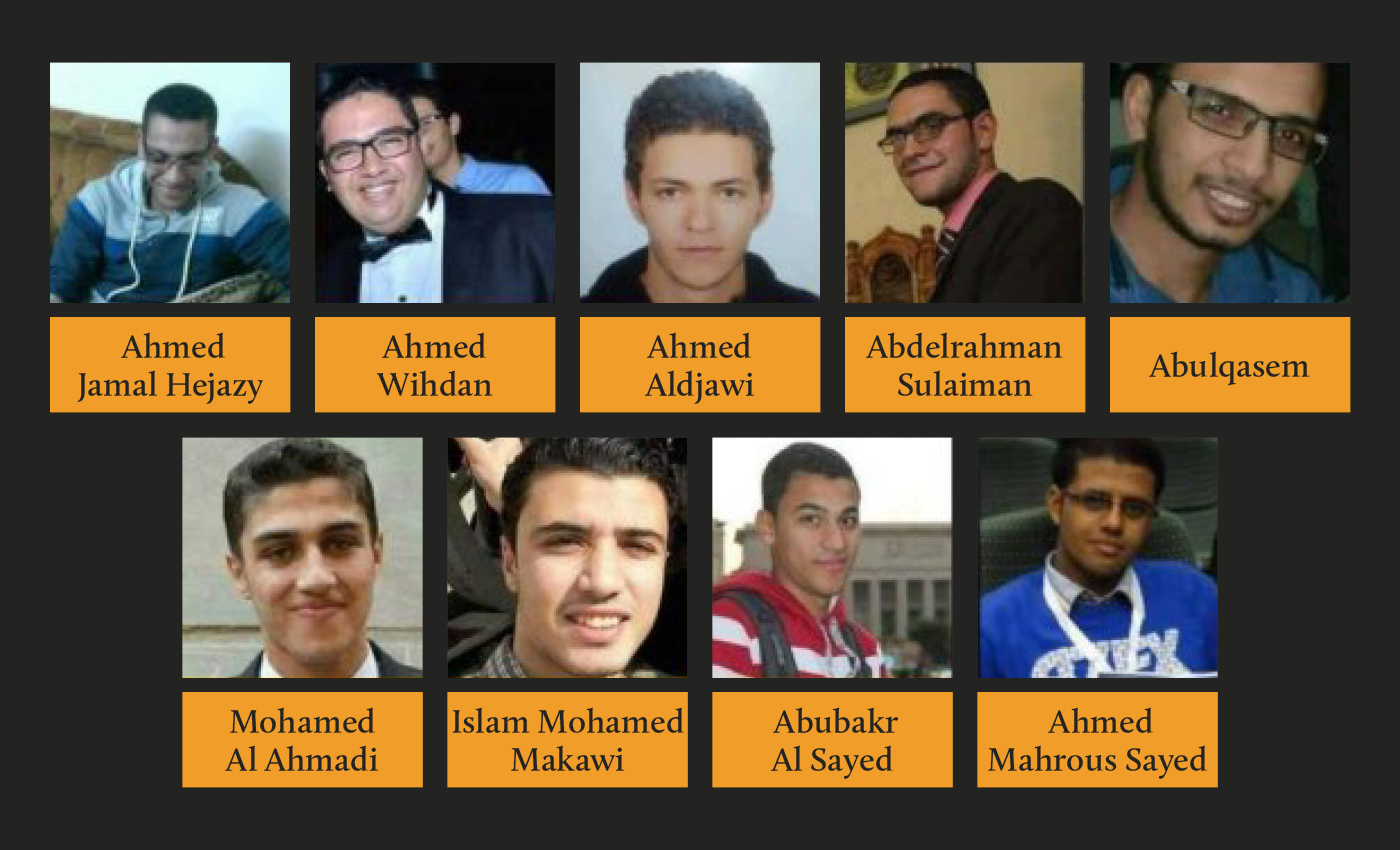 The nine men executed on Wednesday (Twitter)
By
MEE staff

Egyptian authorities executed nine young men on Wednesday morning despite calls by rights groups to halt the executions over due process violations, a source close to their families told Middle East Eye.

The nine men were convicted of killing Egypt’s former prosecutor-general Hisham Barakat and their appeal was turned down by Egypt’s highest appeals court on 25 February 2018.

The daughter of the slain prosecutor, Marwa Hisham Barakat, added to doubts over the executions in a Facebook post on Tuesday evening, saying that she believed the nine men are not the real killers of her father.

“A testimony before God: I knew that young men convicted in the case of assassinating my father would be executed soon", she wrote. "I will say what’s in my heart, because these are people’s lives, just like my father’s. These young men are not the ones who killed my dad. They will die unjustly. Please save them and arrest the real killers.”

On Wednesday morning, Barakat's brother Mohammed Hisham Barakat said that his sister's account had been hacked, that she had not written the statement and that it did not represent the views of the family. Later on Wednesday, an updated post appeared on Marwa Hisham Barakat's Facebook account.

"Thank God the death penalty was carried out against the treacherous terrorism that targeted the martyr Hisham Barakat", the post read. "Not only did the treacherous terrorists try to kill and terrorise the citizens, but they also sought to stir up confusion by hacking my account through one of their agents residing in Turkey on the same day of the executions."

Reacting to news of the executions, Maya Foa, director of Reprieve, the anti-death penalty rights group, said they showed that the use of the death penalty by Egypt's president Abdel Fattah el-Sisi "is now a full-blown human rights crisis".

"Executions have spiked - bringing the total number to 15 in just two weeks - amid widespread abuses including gross due process violations, torture, false confessions and the repeated use of mass trials", Foa said.

"It is shocking that these abuses continue unabated while the international community remains silent."

Thirteen other defendants were sentenced to death in absentia. One of them, Mohamed Abdelhafiz, was forcibly deported from Turkey last month.

Abdelhafiz is currently facing a retrial on the same charges. According to Egyptian law, those tried in absentia stand for a retrial once detained. Abdelhafiz, therefore, is currently held in pre-trial detention.

On Tuesday, Amnesty International urged Egyptian authorities to halt the executions that were handed down based on forced confessions under torture.

“There is no doubt that those involved in deadly attacks must be prosecuted and held accountable for their actions but executing prisoners or convicting people based on confessions extracted through torture is not justice,” said Najia Bounaim, Amnesty International’s North Africa campaigns director.

Egypt executed six other men in February in two separate cases that were denounced by rights groups as unjust.

Egyptian civil and military courts have sentenced more than 1,400 people to death since General Abdel Fattah el-Sisi, who led the 2013 military coup, became president in 2014.

The sentences, according to Amnesty International, followed “grossly unfair trials” that relied on confessions extracted under torture. Many of those sentenced to death have been either members of the Muslim Brotherhood or critics of the Sisi government.