Egypt's government will meet on Wednesday to discuss a controversial draft anti-terrorism law under which reporters could be jailed for contradicting official statements, cabinet officials said.

The government last week approved the law, which President Abdel Fattah al-Sisi must ratify, but a senior judiciary council asked for changes to a provision that would set up anti-terrorism courts.

The draft law has come under attack from the Egyptian Journalists Syndicate and political parties over a particularly controversial article that restricts press freedoms.

The article stipulates a minimum two-year prison sentence for anyone who reports details of militant attacks that contradict official statements.

Justice Minister Ahmed al-Zind has told AFP that the measure is in response to coverage of a militant attack earlier this month on soldiers in the Sinai Peninsula.

The military said 21 soldiers were killed in the attack, after foreign and local media reported much higher figures given by security sources.

The attacks came two days after state prosecutor Hisham Barakat was killed in a car bombing in Cairo, prompting Sisi to demand tougher laws and faster trials for alleged militants.

A government official told AFP on Wednesday that the meeting would consider revisions to the law "with the goal of defending national security and prioritising the nation's interests".

The mass circulation independent daily Al-Masry Al-Youm reported that the government was leaning towards amending the article because of the spreading backlash.

Dia Rashwan, the former head of the Journalists Syndicate, told AFP he had proposed to the cabinet fines instead of prison sentences for offenders.

His proposal would require courts to prove intent and malice in publishing "false" news on militant attacks, he said.

"People I have spoken to on many levels (in the government) have expressed a willingness in resolving the matter," he said.

Government officials would not confirm whether they intended to change the provision.

The discussion of the law comes weeks after a new body called FactCheckEgypt - which officials have said is an independent NGO affiliated to the State Information Service - emerged and started to email foreign journalists directly, asking them to report the official number of casualties or to avoid using anonymous sources.

The country has been fighting a militant insurgency in Sinai since the army, then led by Sisi, overthrew democratically elected president Mohamed Morsi in 2013 following mass protests against his rule.

The attacks have killed hundreds of policemen and soldiers, while more than 1,400 people, mostly Morsi supporters, have been killed in a crackdown on protests. 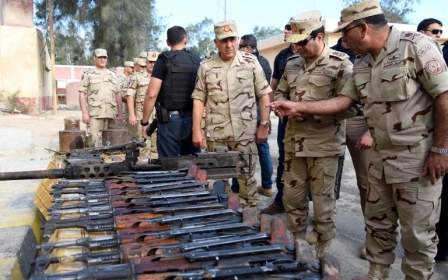