Media, Libya and a Sisi handshake: Why Egypt remains wary of Turkey rapprochement

As the two countries prepare for a third round of diplomatic talks, analysts say it's too early to foresee a full return of relations after nine years of tensions 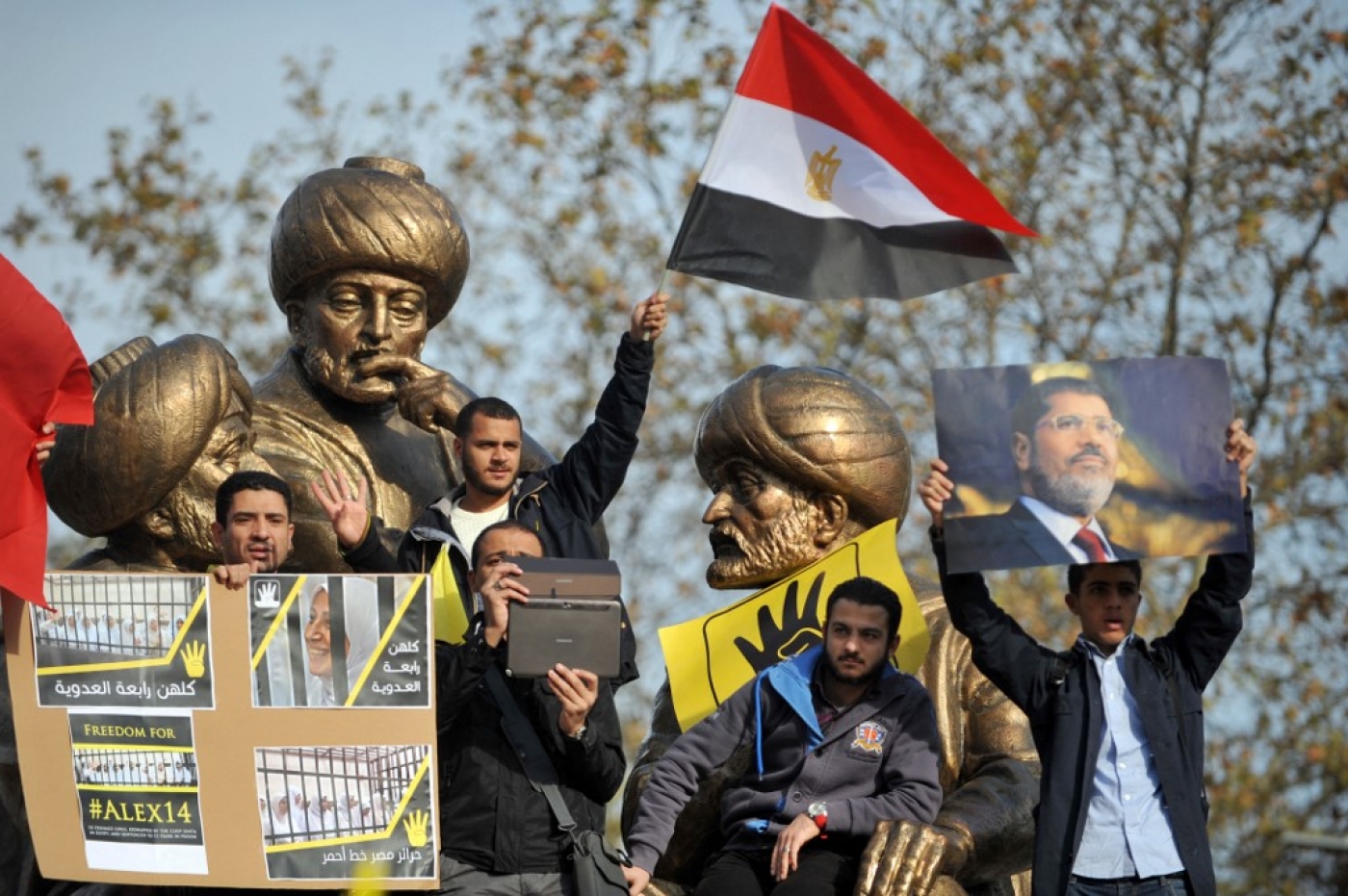 Protesters hold a picture of late Egyptian President Mohamed Morsi during a rally in Istanbul, on 29 November 2013 (AFP)
By
MEE correspondent
in
Cairo

Egyptian political observers have cautiously welcomed a recent announcement by Turkish Foreign Minister Mevlut Cavusoglu that his country would take steps to normalise relations with Egypt to end nine years of political tensions between the two Mediterranean states.

Turkey considered the move undemocratic and lambasted Egypt's treatment of the members and leaders of Morsi's movement, the Muslim Brotherhood.

However, Cavusoglu's remarks attest to a potential shift in relations between the two states, Egyptian observers said.

Cavusoglu's remarks came as Egyptian and Turkish diplomats prepared to hold a third round of negotiations on mending relations between their countries.

Diplomats from Egypt and Turkey met twice in the past few months in their bid to discuss the causes of tension and how to overcome them.

The third round of political talks is also expected to take place as Turkey prepares to appoint a new chargé d'affaires to Egypt.

Egypt and Turkey downgraded their diplomatic representation in 2013, against the background of their political tensions.

Last week, officials told Middle East Eye that Turkey has decided to appoint a new ambassador to Cairo to fill the diplomatic post that was left vacant for nearly nine years.

The officials said the new ambassador would be Salih Mutlu Sen, Turkey's former representative to the Organisation of Islamic Cooperation between 2015-2020.

The officials said Cavusoglu already notified Sen about the role, and Ankara would now seek confirmation from the Egyptian government.

Nevertheless, Cavusoglu refused to confirm media reports earlier this month about Turkey's plans to reappoint an ambassador to Egypt.

Egypt has not commented on Cavusoglu's remarks about a possible normalisation of relations.

Egypt appears to be in no hurry to take a move in this regard. One possible reason for this is that there is a great deal of distrust in Cairo about Turkish intentions, Egyptian political analysts have said.

"The fear in Egypt is that this Turkish reconciliation drive could be bogus," Mohamed Rabie al-Dehi, Egyptian international relations specialist, told MEE. "However, the fact is that Ankara has made a series of concessions in the past period, ones that can contribute to improving relations with Egypt in ways that partially end Turkey's regional isolation."

In October 2021, Egyptian Foreign Minister Sameh Shoukry referred to some progress in relations with Turkey, expressing hopes that the two countries could build on this progress.

"We will monitor and evaluate the matter based on the policies pursued by the Turkish government at the bilateral and regional levels," he told the Saudi television channel MBC Masr.

Deep under this Egyptian caution is a wide gap between the two countries that assumes an ideological nature on the surface but hides complex economic and geostrategic reasons under it.

Egypt and Turkey have been parties to the race for resources in the East Mediterranean, with Turkey trying to be part of the natural gas bonanza in the region and Egypt working hard to exclude Turkey from this bonanza.

Egypt has formed an Opec-like organisation, containing regional natural gas producers and consumers. The same bloc overlooked Turkey - which for years has been striving to be a transit point for energy on the road to the European market.

Turkey countered by trying to isolate Egypt, including by having a foothold in its immediate vicinity, namely in neighbouring Libya and Sudan.

Cairo has also been gritting its teeth in anger at growing Turkish involvement and what is perceived as Turkey's "negative role" in Arab countries, such as Syria and Iraq.

The two countries also competed against each other for influence in the Palestinian-Israeli conflict.

Turkey's desire to make amends with Cairo is apparently part of a larger Turkish drive to put an end to tensions with other regional states, including the United Arab Emirates, Saudi Arabia and Israel.

The belief in Cairo is that this desire is strongly connected to the Turkish presidential election, slated for June 2023.

This is especially clear with the ongoing deterioration of the Turkish economy, said Tarek Fahmi, a political science professor at Cairo University.

By making amends with regional states, Turkey stands to benefit economically, he added.

This Turkish drive has apparently started to pay off. The UAE has pledged billions of dollars in investments for Turkey.

During his latest visit to Turkey, Israeli President Isaac Herzog reportedly discussed cooperation on delivering natural gas to Europe, as the continent is striving to reduce dependence on Russian gas.

In 2020, Turkey was Egypt's third-largest importer. It was also the fifth-largest exporter to the Egyptian market.

In the same year, trade exchange between the two countries reached $4.6bn.

This volume of trade can increase even more in the coming period if political relations between the two countries improve, Egyptian analysts said.

There is also a belief among the same analysts that the war in Ukraine is opening the door for possible cooperation between the two countries in the field of energy.

Nonetheless, full normalisation between the two countries is easier to be aspired to than be fulfilled, Egyptian analysts said.

Libya is a thorny issue between Cairo and Ankara, where the two capitals used to support opposite sides in the conflict.

Egypt objects to the presence of foreign fighters and mercenaries in Libya, including ones flown to the neighbouring country by Turkey.

'Turkey is badly in need of changing its media policies towards Egypt, otherwise we cannot expect any improvement in relations with the Arab country'

"The file of foreign fighters in Libya will practically be an issue between the two countries, but I think they will reach an agreement in this regard," Turkish political analyst Firas Ridvan Oglu told MEE.

In the past nine years, Egypt also established what amounts to a strategic, economic and defence alliance with Greece and Cyprus.

Turkey had looked at this developing alliance doubtfully, even as the three countries said more than once that their get-together was not directed at other states.

However, the intensity of military cooperation and political coordination between the three countries caused worries for Ankara.

Egypt also objected to Turkish media discourse against it, including the airing of TV channels from Turkey critical of the government of Egyptian President Abdel Fattah el-Sisi.

"Turkey is badly in need of changing its media policies towards Egypt, otherwise we cannot expect any improvement in relations with the Arab country," Oglu said. "It needs to make sure that Egyptian channels aired from Turkey will not cause harm to relations with Cairo."

A senior Turkish official previously told MEE that another outstanding issue between the two countries was "whether [Turkish] President Tayyip Erdogan will be willing to shake hands with Egyptian President [Abdel Fattah] el-Sisi or not".

On several occasions in the past, Erdogan has hinted that he would not want to meet Sisi personally, but would allow other members of his government to hold talks with Cairo.

In the past few months since the two countries started their political talks, Turkey has taken some steps to demonstrate its good intentions toward Cairo.

One of the measures it took was to suspend what was viewed in Egypt as a "hostile" media campaign against the Egyptian government.

Some of the TV programmes critical of the Egyptian government were also taken off the air.

The two countries also seem to have reached an understanding on helping the Libyans reach a political solution to the conflict in their country.

All of these are signs, Egyptian observers say, show that things can be better in the future between Cairo and Ankara.

"The measures taken by Turkey on the road to reconciling with Egypt, so far, are positive, but far from enough," Ahmed Fouad, a member of the think tank, the Egyptian Council for Foreign Affairs, told MEE. "However, relations can improve if Turkey changes its regional policies and stops threatening Egyptian interests in the region and interfering in internal Egyptian affairs." 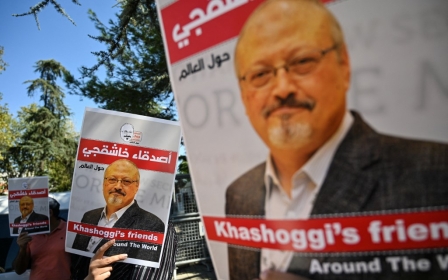