The hashtag #We_DoNotWant_Sisi in Arabic, went viral on social media on Tuesday night, following a remark made by the Egyptian president that he would "not remain in his position for one second," if the people did not want him.

Abdel Fattah al-Sisi's remarks came during his speech at the third National Youth Conference on Tuesday in the Egyptian governorate of Ismailia. The conference has traditionally commemorated Sinai Liberation Day by bringing together youth representatives from around the country.

Sisi's words came in response to an audience member's question: "What would happen if you [Sisi] do not succeed in the election?"

Egypt is set to hold a presidential election in early 2018, in which Sisi is expected to run for president for a second time.

Following a military coup that deposed president Mohamed Morsi in July 2013, Sisi ran for president and was sworn into office in June 2014.

His response sparked the launch of a social media campaign by Egyptian activists calling on Sisi to step down, using the Arabic hashtag #We_DoNotWant_Sisi.

The hashtag was trending worldwide on Tuesday and Wednesday, and was the No 1 trend in Egypt on both Facebook and Twitter.

Translation: #We_DoNotWant_Sisi because Egyptian blood has never been cheaper than during your reign.

Translation: A one of a kind criminal, a mixture of evil, ignorance and madness.

Translation: #We_DoNotWant_Sisi  Enough is enough. Leave and have some mercy on us.

Translation: We_DoNotWant_Sisi You're the one who said that you'd leave if the people didn't want you. Be man and keep your word. 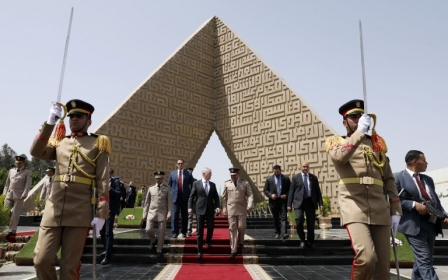