Seven Turkish soldiers were killed on Thursday by a bomb blast in the country's Kurdish southeast, the local governor's office said.

The incident occurred in Turkey's Batman province as the soldiers, who were inside an armoured vehicle, were on their way to protect a construction site, said Numan Kurtulmus, a deputy chairman of Turkey's ruling party.

Seven soldiers were killed and two were wounded.

After the bombing, Turkish Parliament Speaker Binali Yildirim vowed to "get rid" of the PKK, state news agency Anadolu reported.

President Recep Tayyip Erdogan vowed Turkey would not be deterred in its fight against the PKK.

"The blood of our martyrs and our veterans will be avenged," Erdogan said. "We want them to know that this incident intensifies our anger and our hatred."

In a tweet on Thursday, the US Embassy in Ankara condemned "the brutal attack" and sent condolences to the families of the soldiers who were killed.

"In the fight against terrorism, we stand beside our allies Turkey," read the tweet, written in Turkish.

Turkey has waged a decades-long war against the PKK, mostly in the southeast, and tens of thousands of people have died in the fighting. 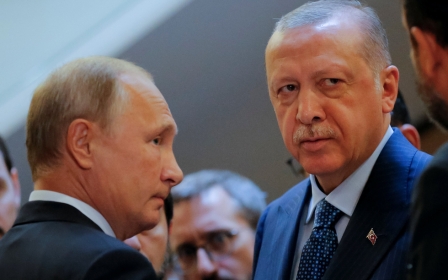