"Whoever heads the executive branch cannot say that Mandelblit's decision is an attempt of a legal coup. That's not right, it's not responsible," said Saar in an interview with Channel 12 News on Saturday. He added: "It's not fixing the system. It's smashing the system."

In a televised address late on Thursday, Netanyahu had said: "Tonight we are witnessing an attempted government coup against the prime minister through blood libels and a biased investigation process.

"I, as opposed to my rivals on the left, want to see a free market, a range of opinions in the media," Netanyahu said. "I am a prime minister who believes in a strong Israel and not in a weak and small country that bows down to others. "I will not allow lies to win," he said. "I will continue to lead this country, according to the letter of the law." The prime minister is not obligated to step down from his post until he is convicted.

Still, "In the two election campaigns we had, he couldn't form a government," Saar said of Netanyahu. "He had our full support even when he made a mistake like dissolving the Knesset," after the April election, the former Likud minister said.

"I don't think that in a third or fifth election campaign he'll be able to form a government. We're not that far from losing control of the country to our adversaries," he said, before calling on Netanyahu to hold party leadership primaries ahead of a 21-day deadline when another government could be formed. "If today we go to primaries and we come to a democratic decision, we can save Likud's rule," Saar said, according to Haaretz.

"I am appealing to the prime minister," he said looking straight into the camera. "So that we can stop this crisis, which you said was the reason we are being ridiculed around the world. How long will we continue like this as a society?" A third election would be in direct contravention with the country's interests, he added.

Haaretz said that Likud later issued a statement backing the PM, saying: "It is unfortunate to see that while Prime Minister Netanyahu maintains Israel's security on all fronts and works to preserve Likud's rule, Gideon Saar as usual shows zero loyalty and maximum subversion."

Justice Minister and Likud legislator Amir Ohana, who was interviewed on the same channel after Saar, said that anyone from the Likud coming out against Netanyahu "makes a huge political mistake".

In a related development, Netanyahu's centrist rival Benny Gantz on Saturday urged leaders of the premier's Likud party to join him in forming a government after their chief's indictment on corruption charges.

"In light of the circumstances, I call for the formation of the largest possible government under my leadership," Gantz told a news conference, addressing members of the right-wing Likud.

"I would be the prime minister for the first two years," he said.

And if Netanyahu "is cleared [of any wrongdoing] he could return and become prime minister," Gantz said. 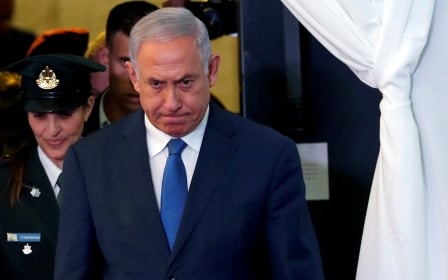