In face of government denials, pilot and employees at Pakistan's Noor Khan Airbase say they saw aircraft arrive in Rawalpindi 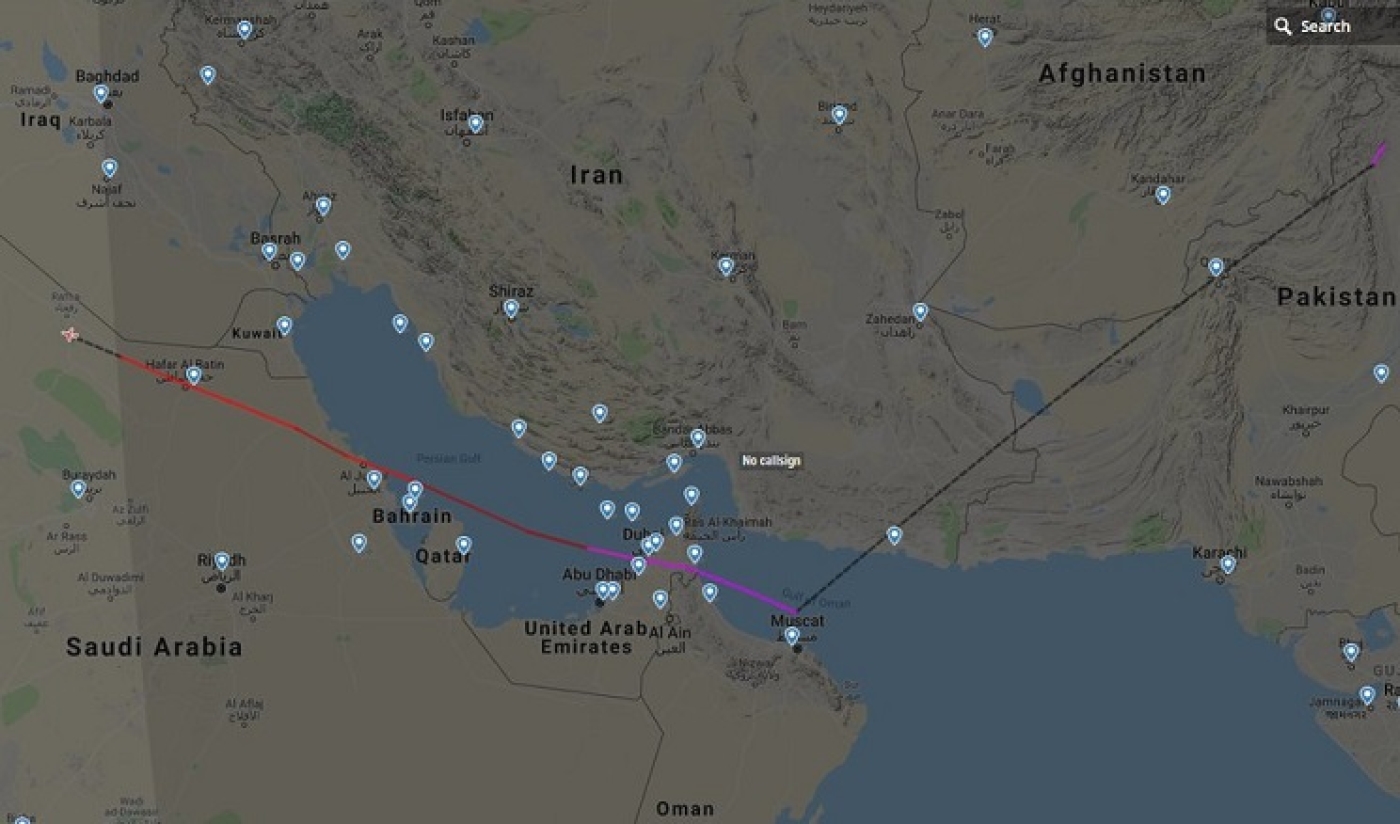 Path of flight that left Tel Aviv, landed in Amman and then Islamabad last month (Twitter/@avischarf)
By
Suddaf Chaudry

ISLAMABAD - After more than a week’s worth of Pakistani government denials that an Israeli plane stopped off in Islamabad around the time of Israeli Prime Minister Benjamin Netanyahu's surprise Oman trip, witnesses have revealed to Middle East Eye that such an aircraft did in fact visit the country.

A pilot, who spoke on condition of anonymity due to the sensitivity of the subject, told MEE that the BizJet flight was in the air next to him on 24 October just before it landed at Noor Khan Airbase, a military airbase in Rawalpindi.

Three members of staff at the airbase confirmed the pilot’s account. One said he saw a car pick up a delegation at the steps of the plane which returned several hours later.

But a major mystery still remains: what was the plane doing in Pakistan – which does not have diplomatic relations with Israel - and who was on-board?

The uproar began on 25 October when Avi Scharf, editor of the English edition of the Israeli newspaper Haaretz, tweeted details of a flight map showing a private jet flying from Tel Aviv to Islamabad.

Israeli 🇮🇱 bizjet flew from TLV to Islamabad, #Pakistan 🇵🇰, on the ground 10 hours, and back to TLV.
Cleared flight-plan with usual 5min groundtime trick in Amman
M-ULTI glex pic.twitter.com/haHn1NU73L

Scharf’s tweets sent Pakistani journalists and social media users into overdrive with some suggesting that Netanyahu had arrived in Islamabad ahead of his surprise visit to Oman.

The government quickly put a damper on the reports. Pakistan Civil Aviation Authority denied that an Israeli jet had landed in the capital. At a workers convention, Pakistan’s information minister Fawad Chaudhry described Scharf’s tweet as propaganda.

He later told MEE: “Look, there was no Israeli jet. There was only a UAE plane. That plane was theirs.” Chaudry appeared to be referring to an Emirati delegation that visited Islamabad on 26 October - a day after Scharf tweeted.

Iqbal told MEE: “I simply requested clarification about the series of events. I hope this does not mean there is a fire under the smoke. It makes one wonder if they are hiding something."

He added: “As we have no independent means of verifying, I guess we have to accept the government’s position at face value."

Asked by Middle East Eye to comment on the observations of the Noor Khan employees, Chaudry said: "Our position remains the same. There was no Israeli plane."

MEE contacted Pakistan's foreign ministry about the airbase staffers' comments but at the time of publication received no response.

Analysts have questioned whether Pakistani authorities were stating technical facts in an effort to obscure the wider truth.

According to data from Flightradar24, an aviation tracking website, the BizJet flight took off from Tel Aviv on 23 October at 20:00 UTC (GMT), landing in Amman on 24 October.

Scharf theorised that this was done so that the flight would be given a new transponder code, making it harder to trace.

From Amman, the jet reappeared on the radar in Islamabad ten hours later. Then, on 24 October at 00:40 UTC, it returned to Tel Aviv.

Ian Petchenik from Flightradar24 told MEE: “The aircraft departed and returned to Tel Aviv via Amman and was tracked eastbound and westbound over Pakistan at two different points in time.”

The plane was registered in the Isle of Man last year to a company called Multibird Overseas LTD, but the final ownership of the plane remains unclear. Simon Williams, director of the Isle of Man’s Civil Aviation Administration refused to respond to MEE’s questions.

So when government officials say that an Israeli plane did not land in Islamabad, they were technically right: it was an Isle of Man plane that left Tel Aviv and stopped in Amman and landed in Rawalpindi. But why?

The flight comes against the backdrop of other surprising Israeli visits in recent weeks. Along with Netanyahu’s trip to Oman, Israeli ministers also visited the United Arab Emirates last month.

Former US ambassador to Israel, Dan Shapiro, told MEE that the mysterious flight should be seen in this light.

“Israel recently has made it clear it seeks to expand its relations with Arab and Muslim countries including those it does not have formal diplomatic relations,” he said.

Pakistan and Israel, he said, have quite a bit in common. Both have had to redress their relationship with the US many times over the years, and both face security challenges from militant organisations.

“As Saudi-Israel relations thaw, Pakistan could be influenced,” he added. “In quieter terms, there could be ties.”

However, Shapiro stressed that this would not be an easy task, as a result of Israel’s close relations with neighbouring India with which Pakistan has long had tensions, fighting three major wars against one another since winning independence from Britain in 1947.

Pakistan has also faced increasing tensions with Washington both over its support for the Taliban in Afghanistan and its close relations with China in the face of Beijing-Washington trade wars.

In January, US President Donald Trump’s administration announced that it would suspend US military aid to Pakistan. At the time, Trump tweeted: “The United States has foolishly given Pakistan more than $33 billion in aid over the last 15 years, and they have given us nothing but lies and deceit.”

Then, in September, the US announced it had cancelled $300m of aid that had already been suspended.

The aid cuts come as Pakistan faces economic challenges after its foreign exchange reserves plummeted, leaving the country in a serious debt crisis.

Last month, newly elected Pakistani Prime Minister Imran Khan told MEE that his country was in such desperate financial straits that he was forced to attend the Future Investment Initiative, a financial summit in Saudi Arabia that many Western officials and companies boycotted over the murder of Saudi journalist Jamal Khashoggi.

He ended up securing $6bn in funding there.

“The reason I feel I have to avail myself of this opportunity [to speak to the Saudi leadership] is because in a country of 210 million people right now we have the worst debt crisis in our history," Khan told MEE several days earlier.

“Unless we get loans from friendly countries or the IMF [the International Monetary Fund] we actually won’t have in another two or three months enough foreign exchange to service our debts or to pay for our imports. So we’re desperate at the moment.”

The US has the largest share of votes at the IMF.

So the plane, said analysts, should also be seen as part of the cash-strapped country’s move away from ideological posturing towards strategic positioning in order to generate revenue, and outreach to Israel is one action Pakistan could take to ingratiate itself to the US.

Ayesha Siddiqa, a Pakistan military expert at SOAS’ South Asia Institute, said: “I think the military is desperate to acquire some money, they are at a point where they will welcome anything that brings them cash." 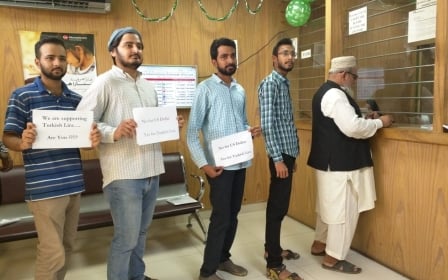 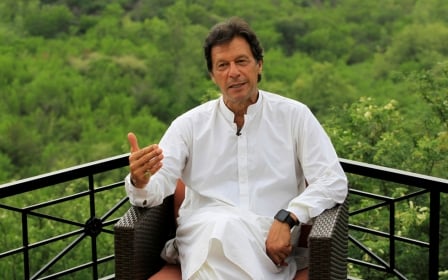 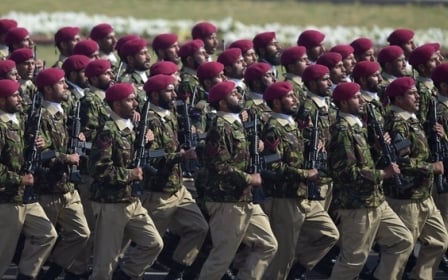