Crispin Blunt, a Conservative member of parliament, met Jack Letts at a prison in Qamishli during a visit by a British parliamentary delegation to the Kurdish-controlled region in October.

It followed months of negotiations with Kurdish officials in which Blunt, who was acting as an “independent diplomat” on behalf of Letts’ parents, had sought to facilitate the 24-year-old’s repatriation to the UK and even offered to arrange security to escort him to a British consulate.

Blunt had originally been appointed by lawyers for John Letts and Sally Lane to serve as an expert witness in their own trial on terrorism charges over attempted payments to their son, as well as to seek to facilitate Jack Letts’ return home to appear as a defence witness for his parents.

Blunt told MEE that his two-hour meeting with Letts, a Muslim convert who travelled to IS-held territory aged 18 in 2014, was a “private visit” which he had arranged through local Syrian Democratic Forces (SDF) officials.

He was accompanied by a Labour MP, Lloyd Russell-Moyle, and a British union official, Simon Dubbins, at the request of local Kurdish officials, he said. The prison governor and other local officials were also present throughout the meeting.

Dubbins confirmed to MEE that he had attended the meeting as an observer. Russell-Moyle declined to comment.

Blunt was able to ask Letts whether he wanted lawyers acting for him to appeal against the UK’s decision earlier this year to revoke his citizenship. Letts opted not to do so.

But he told Blunt he wanted his parents to continue pressing Canada, where the family also hold citizenship, to help him.

Letts said he was sharing a cell with about 35 other prisoners. He had been interrogated about 15 times, including twice by US officials, he said.

But Blunt said he was unable to discuss the conditions in which he was being held and his treatment because of the presence of local officials.

“We couldn’t talk candidly about anything,” Blunt told MEE. “He was being held in the same conditions as other suspected foreign fighters.”

Blunt’s meeting with Letts raises further questions about the British government’s policy of non-assistance to British nationals swept up in formerly IS-held territory and now being held in Kurdish-controlled detention facilities.

The government has said it cannot help them because the UK does not have consular facilities in Syria and it considers it too dangerous to send officials to the Kurdish-controlled region, known as the Democratic Federation of Northern Syria or Rojava.

Blunt told MEE that the region had been “perfectly safe” when he was there, though he added that this preceded Turkey’s recent attack on Kurdish forces in the area and the US withdrawal of its forces which had previously been working alongside the Kurds as part of the coalition against IS.

One consequence of that has been a deal between Kurdish officials and the Syrian government in Damascus which has seen Syrian and Russian forces return to the region.

Several British journalists have also been granted access to Letts by Kurdish officials since he was detained in early 2017, apparently after escaping from IS-held territory. 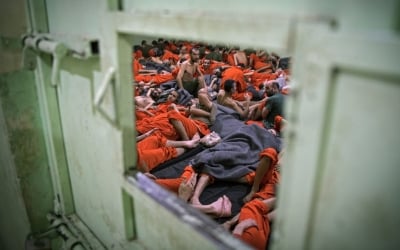 “If the UK wanted, as other countries have, to retrieve the suspected British foreign fighters and other British citizens caught up there they’d be able to do so. That was my view then and it remains my view,”  said Blunt, who is a former chair of parliament's foreign affairs select committee.

MEE last week reported that the foreign office had drawn up options to assist Letts in 2017 because of concerns he was being mistreated.

But Johnson, who was then foreign secretary and is now prime minister, decided to stick to the policy of non-assistance, with officials noting that there was no public sympathy for his case.

Other countries have also been able to repatriate their nationals from the region, with Bosnia and Herzegovina last week becoming the latest country to repatriate a group of 25 suspected fighters, as well as women and children.

The UK last month brought home a small number of orphaned children but Home Office officials said afterwards that future repatriations would be looked at on a case-by-case basis and subject to national security concerns.

But in a report prepared in his capacity as an expert witness for John Letts and Sally Lane, Blunt said that the British line that consular services could not be provided to detainees in Syria was a “convenient fiction” and that British officials were operating in more hazardous circumstances in other parts of the world.

“The suggestion by Ministers that it is too dangerous to despatch British officials to the territory controlled by the DFNS [Democratic Federation of Northern Syria] is plainly a convenient fiction for not taking up the UK’s responsibility for the captured suspected foreign fighters that are British as well as British brides and their children,” he wrote.

Blunt said the government’s choice not to engage with Kurdish regional officials was “entirely a matter of choice and convenience for not having to deal with the issue of the return of the British suspected jihadis”.

And he said it was “inconceivable” that interrogations of suspected British fighters had taken place without the involvement of British intelligence agencies.

Tayab Ali, a lawyer representing Jack Letts and his parents, called on the government to review its policy towards British nationals being held in Syria.

"The fact that a senior member of Boris Johnson's own Conservative Party was able to visit Jack in prison makes a mockery of the government's claim that it is too dangerous to send officials to assist British nationals who have effectively been cast into an extrajudicial black hole,” Ali told MEE.

“The new government needs to urgently review this policy and step up to its responsibilities, both towards the detainees themselves and to the Kurdish authorities left holding them."

Blunt had initially sought to visit Letts with a lawyer in order to take a statement from him that could be used as part of his parents’ defence, and also asked Kurdish officials to help him arrange for his return to the UK.

Kurdish officials said that they could not deal with Letts’ case separately to those of other British detainees and said that the issue could only be resolved through official British government channels.

Without any British government support for his mission, he proposed that Letts should be handed over into his custody, along with an appropriate security detail, to be escorted into British custody. But Kurdish officials again rejected the plan.

The eventual visit came too late for Jack Letts to provide a statement for his parents’ case. In June, they were found guilty over a payment of £233 ($300) sent to a person in Lebanon whose details had been provided by Jack Letts in September 2015 and handed suspended 15-month prison sentences.

John Letts and Sally Lane said that they believed that their son’s life was in danger and sent the money to help him to escape from IS. They say that there is no evidence that their son was a fighter for IS.

MEE contacted Kurdish officials for comment but had not received a response at the time of publication.

Kurdish officials have previously said that Letts is under investigation on charges of being an IS member and is being treated in accordance with international human rights standards, describing allegations of his mistreatment as “baseless”.

Blunt told MEE that the UK and other countries had a “responsibility to take responsibility” for their own citizens who were suspected of fighting for IS or being associated with the group.

“The responsibility cuts both ways. What we should not do is consign them to summary justice that doesn’t meet any respectable standards of international justice. So a duty of protection and a duty of responsibility to investigate them and prosecute them if the evidence is there that they have done serious wrong.”

The Foreign Office told MEE: “Consular support is not available from the British government from within Syria. As such, all services of the British Embassy in Damascus are suspended and all diplomatic and consular staff have been withdrawn.”