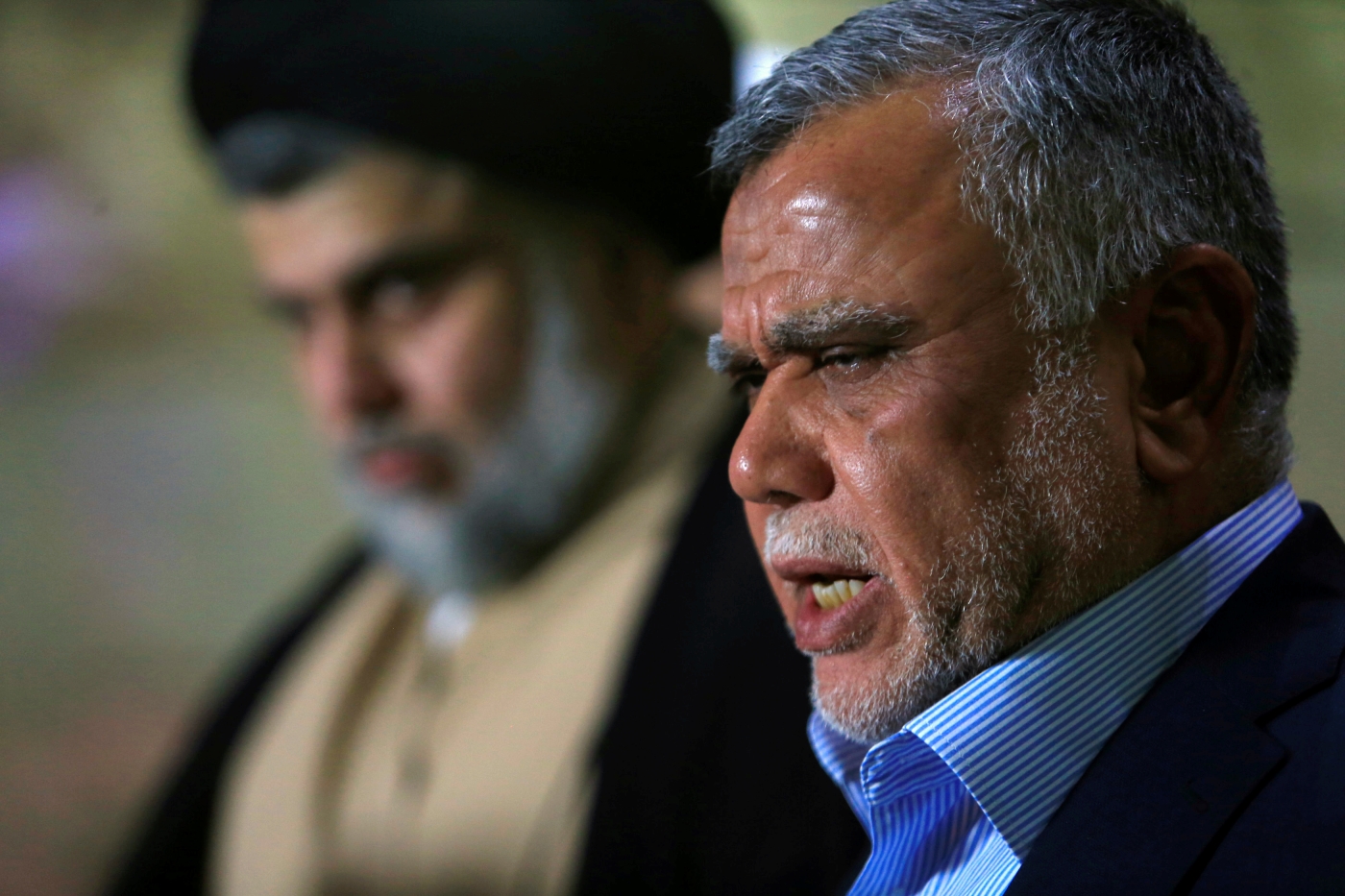 Paramilitary groups in Iraq have agreed to accept Hadi al-Amiri, right, as the new leader of the PMF, including those loyal to anti-Iran cleric Moqtada al-Sadr, left (Reuters)
By
Suadad al-Salhy
in
Baghdad

The leaders of Iranian-backed paramilitary groups  in Iraq have agreed to put their differences aside and back Hadi al-Amiri as the new chairman of the Popular Mobilisation Forces (PMF) as part of a wider plan brokered by Hezbollah leader Hassan Nasrallah to quell tensions between the groups and create a “united resistance” to US troops in the country.

The informal agreement was forged at a meeting convened in Beirut on Thursday after Nasrallah was asked by Iran to organise its Iraqi factions following the assassinations of Iranian general Qassem Soleimani and Abu Mahdi al-Muhandis, the de facto leader of the PMF, in a US drone strike in Baghdad on 3 January.

Most of the leaders then flew to Tehran on Sunday, before moving onto the Iranian city of Qom on Monday where they also met with influential Iraqi cleric Moqtada al-Sadr in a significant display of Shia unity.

While the stated purpose of these meetings was to rally groups commonly opposed to the US presence in Iraq, sources told Middle East Eye that they were also convened to address the leadership vacuum and quell in-fighting over long-simmering feuds between rival Iran-backed militias in the wake of the killings of Soleimani and Muhandis.

“All these meetings were attempting to gather the factions after they have been devastated in an unprecedented way,” a prominent Shia politician familiar with these meetings told Middle East Eye.

“Even the meeting with Sadr was heading in this direction, and it is part of the attempts to break the ice with him and drag him to the camp [of the pro-Iranian factions].”

Meetings in Beirut, Tehran and Qom

Commanders and senior officials within most of the most prominent pro-Iran armed factions, including Asaib Ahl al-Haq, Kataeb Hezbollah, Kataib Jund al-Imam, Kataib Sayyid al-Shuhada and Kataib al-Imam Ali, arrived in Beirut on Thursday in response to Nasrallah's call for them to “set aside differences” and promote calm in the aftermath of the US strikes.

At the same time, many of Iraq's top politicians and the leaders of other armed factions, including Amiri, the leader of the Iran-backed Badr Organisation who was nominated as Muhandis' successor less than 24 hours after his death, went to Tehran to offer their condolences to Iranian Supreme Leader Ali Khamenei over the killing of Soleimani.

As most returned to Baghdad, Amiri and Akram al-Kaabi, the commander of the Huzballah al-Najaba Brigades, remained there, where they were joined on Sunday by most of the leaders who had met Nasrallah in Beirut.

- attendee of PMF meeting in Qom with Moqtadr al-Sadr

Less than 24 hours later, the group travelled to Qom where they were photographed meeting Sadr, who has been pursuing religious studies there for months, and two of his top military aides, Abu Doaa al-Issawi and Abu Yasser al-Kaabi.

One of the attendees who participated in the meeting said in a press statement: “The aim of the meeting with Sadr was to prepare the ground for the creation of a united resistance front to dislodge the American forces and all foreign forces from Iraq and coordinate to unify the positions.”

But several Shia commanders and politicians familiar with what was discussed have told MEE that the series of meetings was mostly directed at resolving internal tensions and disputes between the different groups that make up the PMF, a government-organised umbrella group of Shia militia factions also known as Hashd al-Shaabi which was created in 2014 to fight alongside Iraqi security forces and Kurdish forces against the Islamic State group.

The PMF's factions divide into three main groups. The first is linked to the supreme religious authority in Najaf represented by Grand Ayatollah Ali al-Sistani; the second is associated with Sadr; while the last group, which represents the most numerous and best armed, is associated with Iran's Islamic Revolutionary Guards Corp (IRGC).

The Iranian-backed armed factions have been one of the biggest challenges to the authority of the Iraqi government ever since the 2003 US-led invasion that deposed Saddam Hussein and pitched the country into turmoil and political instability.

Although they became a part of the Iraqi security establishment and have been funded and equipped mainly from the budget of the Iraqi government since 2016, they do not fall under the command of the leader of the Iraqi armed forces.

Many have also been accused of involvement in illegal activities, including killings, drug trafficking, oil smuggling and racketeering.

Disputes over smuggling and political influence

From outside, these factions appear to be a united front, acting violently towards their critics and threatening both government and non-government parties who challenge their activities. Yet internally, they compete fiercely for financial gains and control of influential government positions.

For example, competition over oil and scrap metal smuggling from southern Mosul in recent years was one of the main reasons for the differences that broke out between most of the the faction leaders who attended the Beirut meetings, one of whom had sought to obtain the largest share of the illicit trade at the expense of the others.

'Iran needs at least three months to decide how to manage the factions known as the resistance axis, who will be in charge and which mechanisms should be followed'

Another dispute erupted in recent months between leaders of two of the most prominent factions who attended meetings in Beirut over the political gains and government positions that one of them received, while the other was deprived of such gains because of his defiance of Muhandis' orders.

A third dispute erupted several weeks ago between two groups within Kataeb Hezbollah itself about some of the gains obtained by one of the leaders close to Muhandis which ended with the defection of the aggrieved leader and his announcement of the creation of a separate faction.

The meetings in Beirut sponsored by Nasrallah “were aimed at achieving a truce between these factions,” a commander who attended told MEE.

“Iran asked Nasrallah to play the same role that Soleimani was playing in Iraq until some decisions are made,” the commander said.

“Iran needs at least three months to decide how to manage the factions known as the resistance axis, who will be in charge and which mechanisms should be followed. So it [Iran] needs to ensure that the situation between the factions remains the same as it is now.”

MEE has contacted Hezbollah's media office in Lebanon for comment but had not received a response at the time of publication.

Iran is facing unprecedented tension in its relationship with the United States after it bombed Iraqi military bases hosting US forces last week, in retaliation for the killings of Soleimani and Muhandis.

In addition, the relationship between Sistani, the spiritual leader of the Shia community in Iraq, and Khamenei has deteriorated significantly because of the Iranian supreme leader's insistence on using Iraq as a proxy battleground for the confrontation with the US, and over the role of Iranian-backed armed groups in the killing and intimidation of Iraqi anti-government protesters.

In a sermon at Friday prayers last week, Sistani described both Iran and America as “strangers” who should not interfere in Iraqi affairs.

But at the same time, the row sparked a lot of discussion in official Iranian circles over the success of the policies pursued by Khamenei and Soleimani in Iraq, Iraqi leaders close to Iran told MEE.

“Iran is in a very critical position. The policy that Khamenei previously pursued in managing the Iraqi file and the region is no longer successful. The Iranian Revolutionary Guard had contributed to creating problems in Iraq that turned into a burden for Iran and became an obstacle in the way of its negotiations with the United States,” a prominent Shia politician told MEE.

“Therefore, discussions are currently taking place in Iran about which Iranian authorities will receive the file [of Iraq] - intelligence, the foreign affairs ministry, or keep it in the hands of the Guards?

“Also they need to decide who will replace Soleimani. General Esmail Ghaani [Soleimani's successor] was responsible for the Afghanistan file and had no experience in managing the Middle East.”

Ghaani was appointed as head of the IRGC's elite Quds Force following Soleimani's death, having served as his deputy since 2007. But Ghaani does not speak fluent Arabic.

Ali Larijani, the head of the Iranian Shura Council, or parliament, is one of the suggested names to take over Soleimani's responsibilities in the region, the politician said.

Larijani is a successful politician who tends to favour diplomacy over military solutions. He also enjoys good relations with Najaf, which means that “Iran is seeking to calm the situation in Iraq at all levels”, according to the politician.

Resolving the longstanding rift with Sadr, who does not hide his hostility to the factions associated with Iran, is also considered a priority in Tehran after the death of Muhandis for fear that Sadr could challenge Iran's control of the PMF.

Sadr holds Assaib Ahl al-Haq and Huzballah al-Najaba in particular disdain because he considers their leaders, Qais al-Khazali and Akram al-Kaabi, to be archrivals who defected from him in 2005.

Amiri's Badr Organisation, the oldest and one of the most powerful paramilitary Shia armed groups, was formed in Iran in 1982 to fight Saddam Hussein's former Baathist regime.

At 66, Amiri is also the oldest among the leaders of the factions associated with Iran. He is a follower of Khamenei and his loyalty to Iran is beyond doubt.

All indications suggest that the leaders of the PMF factions consider Amiri to be an acceptable leader “thanks to his personality, which tends towards flexibility, simplicity and directness,” a PMF commander close to Sistani told MEE.

Sadr initially agreed to back Amiri in exchange for appointing his military assistant, Abu Doaa al-Issawi, to the position of chief of staff previously held by Muhandis, in addition to a promise to put more of his fighters on the PMF payroll, PMF commanders familiar with the talks told MEE.

'We have specific demands. If Amiri is satisfied with their implementation, we will not object to his nomination'

Such a move appears significant. Usually, Sadr refrains from allowing his leaders to take public-facing roles in administrative or military formations in order to avoid blame for any possible failure and to obtain the greatest gains without drawing attention to his involvement.

“We have no problem with Amiri, and we are not seeking to obtain the leadership [of the PMF],” one of Sadr’s assistant told MEE.

“We have specific demands. If Amiri is satisfied with their implementation, we will not object to his nomination.”

While Nasrallah’s endeavours have, in principle, resulted in a truce, there are no guarantees that this arrangement will hold, especially if the current collective anger of the paramilitary groups is not channelled towards US forces in Iraq.

With tensions seemingly easing between Washington and Tehran following Iran's non-lethal attacks on US bases in Iraq last week, Iranian-backed Iraqi forces “have received explicit orders not to target any American interests or people until further notice,” one PMF commander told MEE.

But with Tehran apparently happy for now for the Iraqi government to pursue a US withdrawal through legal and diplomatic channels, he warned that the paramilitary groups could return to their old feuds unless they are given something to do.

“Iran will find a way to keep these factions busy. It may allow them to practice their hobbies from time to time by striking a blow here or there against the American forces,” he predicted.

“But there will not be a painful strike. All the warring parties [Iran, its proxies and the US] will adopt a policy of exchanging slaps for the next two or three months.” 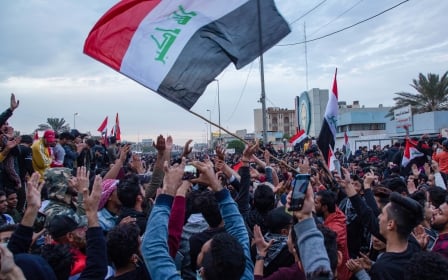