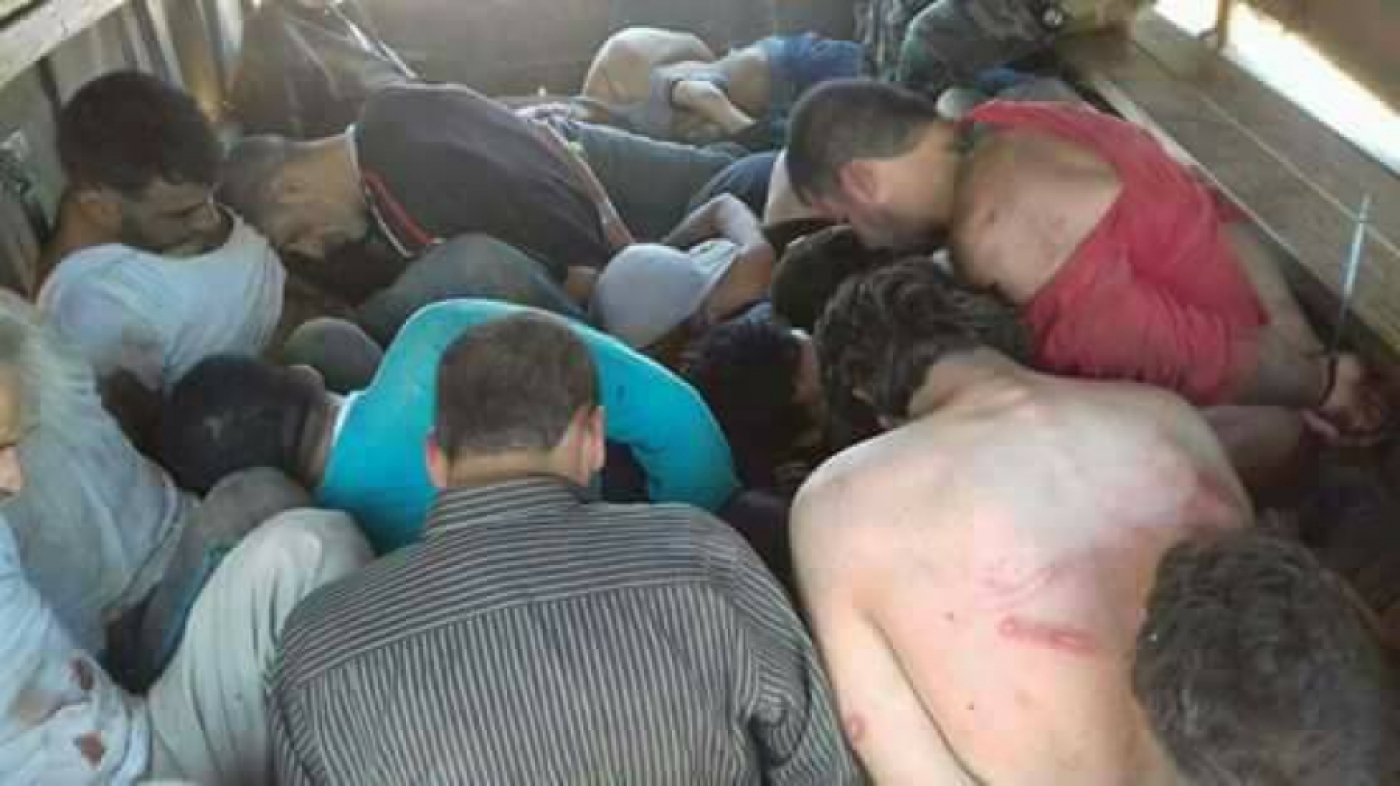 An image shared on social media of men rounded up by the Lebanese army after refugee camp raids last month (screengrab)
By
Lizzie Porter
, Kareem Chehayeb

BEIRUT - The Lebanese army has been accused of widespread torture of Syrian refugee prisoners, four of whom died in custody after they were picked up in mass raids at camps near Arsal on the Syria-Lebanon border.

The four men died after apparently spending several days in the custody of the Lebanese army after the raid, prompting the military to open an inquiry. However, initial forensic reports, seen by Middle East Eye, said there was "no evidence of violence" against the prisoners and that the four men had died of natural causes.

The victims were left tied with plastic handcuffs for days on end, "to the point where it caused extreme physical damage - on both their hands and legs," said a legal source who had seen the bodies before their burial on 11 July.

The source told MEE that deep wounds on the corpses were clear indicators of torture.

"There are also the wounds all over their bodies - on the shoulders, arms, knees - especially from the knees. People who were detained and released told me that they were tortured as well."

The source, who cannot be named for security reasons, questioned the army's official version of events, in which the deceased died of heart attacks and a stroke brought on by the weather.

A second source with extensive experience of examining images of torture victims said the pictures showed "enough evidence of clear signs of torture".

"This is beyond any doubt. There is clear sign of tension and trauma on the wrists, which could indicate that the victim has been hung by his wrists, by gravity," the source said.

"It cannot be signs of regular hand restrainers, the level of the trauma and pressure clearly indicates that the victims were hung by their hands.

"We can also see intense round traumas on the abdomen and lower back, which are not signs of falling. If somebody falls, the trauma is on the extremities, not on the central abdomen."

People close to the dead men also said they were confused about the army's version of events.

"There was no pre-existing health condition," a relative of one of the victims told MEE, who shared pictures of the burial.

When asked if they thought the deceased had been tortured, the relative said: "God knows best... but the pictures speak for themselves."

A medical source from a hospital in Arsal said one of the dead was also a medic, who did not live in the camp.

"He was an anesthesiologist," the source told MEE. "When the [army] statement said that he had pre-existing health conditions, we were shocked because that wasn't the case. He died healthy."

Lawyers representing the families of three of the men obtained permission for an independent assessment of the bodies. However, military intelligence intervened and confiscated the forensic samples before it could be carried out.

"We are not convinced that the initial report [from the army-appointed medic] is accurate," said Wissam Tarif, an advocacy director representing three of the families.

"There is no independent analysis yet - they put an obstacle in front of that.

"We obtained an order from a judge in Zahle to obtain an independent forensic opinion, and the forensic samples were taken to Hotel Dieu [a hospital in Beirut] but the military intelligence intervened and took them and the organs [samples]."

Human rights observers are now sending images of the bodies abroad for independent examination, amid fears that the results of the army's own investigation will not be made public.

"We have sent photos of three of the bodies to a doctor with expertise in documenting torture for assessment, to see whether they show evidence of the cause of death," Human Rights Watch Lebanon researcher Bassam Khawaja told MEE.

"In Lebanon there is a history of the security services opening investigations but not publishing the findings, so the public and the families don't know the results," he continued.

The four men were arrested after the army swept into two refugee camps at Arsal, al-Nur and al-Qariya, looking for what they said were "terrorists". They were met by a series of suicide attacks and one grenade attack, which injured several soldiers.

The army officially acknowledged that one Syrian died, a four-year-old child, in one of the suicide attacks, and four more subsequently in their custody.

However, sources in Arsal said at least seven others were killed, increasing the death toll to 12.

A medical source in Arsal said several bodies were received from both the Lebanese army and neighbouring hospitals in east Lebanon before and after the military operations.

"Four days after the operation [on 4 July], we received four dead bodies from the Baalbek municipality," the source said.

"Three were buried immediately, and the other who was decapitated with his arms amputated was left for a week in case he was identified, but was buried a week later."

It was not until 11 July when they received the four bodies of the Syrians explicitly identified in the military statement.

While the army claimed that the Syrian child died due to the suicide attacks, other sources claim that she was crushed by an armoured personnel carrier but the military prevented doctors from examining the body.

"We also received the body of a four-year-old, though we were not allowed to examine it," the source said.

"Most of the families at the encampments have said that the child was crushed, but of course I was not there to witness it."

Another body was allegedly taken to the Rafik Hariri University Hospital in Beirut, before it was transferred to Arsal for burial, although it remained unclear why the corpse was separated.

A history of torture

The possibility of death under torture in Lebanese army custody comes against a background of previous accounts of abuse by security services.

Last December, Human Rights Watch published the harrowing account of a Syrian refugee who said he was beaten, verbally abused and had a rod pushed up his anus at Rehanieh military police prison on the suspicion of being gay.

HRW has thoroughly documented 10 cases in which civilians in Lebanese military detention said that they were tortured. This included during interrogations, when none of them had access to a lawyer or their families.

"The use of torture is taking place [in the Lebanese security system] we cannot deny that," George Ghali, programmes director of Lebanese human rights organisation Alef, told MEE.

"There hasn't been proper accountability for these cases which is creating a culture of impunity, tolerance and acceptance."

The UN Committee Against Torture has echoed similar concerns.

The 30 June army raid near Arsal was the latest of dozens carried out on security grounds, in which more than 350 refugees have been arrested.

But human rights observers are concerned that security services fail to treat detainees with dignity during their operations.

The 30 June raid caused widespread anger and furthered accusations of ill-treatment of refugees by Lebanon's security forces, after images appeared of dozens of refugees lying face down on the ground, guarded by armed soldiers.

MEE also understands that some of the prisoners were not given reasons for their arrest.

"Putting their faces on the ground, lying on their stomachs - that is not going to provide more protection or security," said George Ghali.

"Our position is that the constant and systematic human rights violations that are occurring in this situation feed a hospitable environment for radicalisation."

Since the 30 June raid, media and human rights observers have been denied access to Arsal, which the Lebanese army consider a security zone.

While some of those arrested have since been released, observers are concerned about the fate of the scores still believed to be in prison, who risk disappearing in Lebanon's opaque security apparatus. 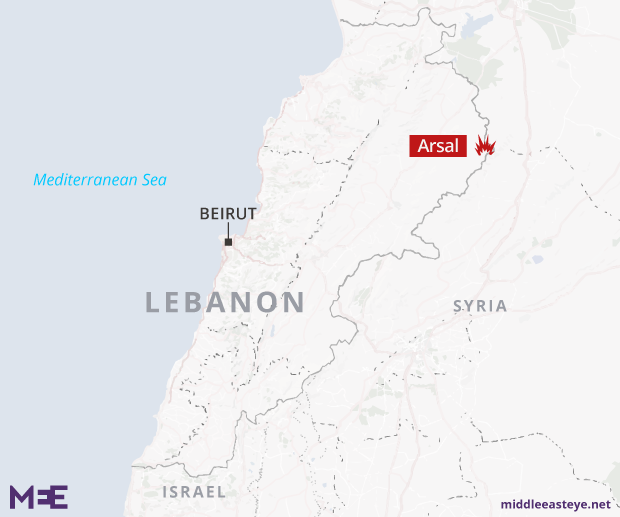 Although there was no evidence of people being forcibly returned to Syria, he said access by lawyers or family members to individuals detained by the Lebanese military is routinely "very hard".

On 10 July, the Lebanese prime minister, Saad Hariri, said the army's investigation into the deaths in custody would be completed in "two or three days".

But the results have yet to be revealed.

"The army is conducting a clear and transparent investigation into this issue and no one should doubt it because the army is keener on the security of the citizens and civilians than anyone else is," Hariri said.

"Also, questioning the investigation carried out by the Army Command is unacceptable."

A Lebanese army source told MEE that they did not have any more information than previously released comments. The military had described torture allegations as "baseless".

The army did not respond to questions from MEE to confirm the total death toll after the Arsal raid, say how many men were still in custody, or explain if there were plans to improve transparency. 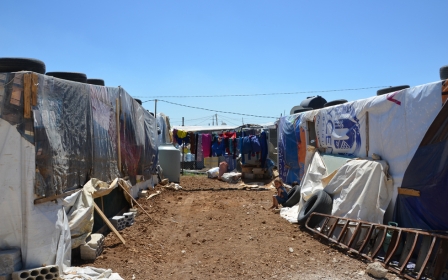 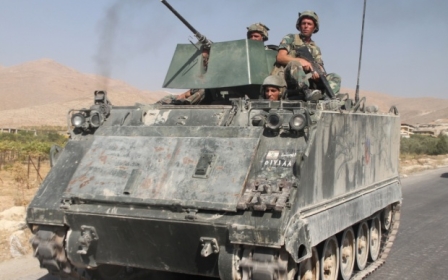 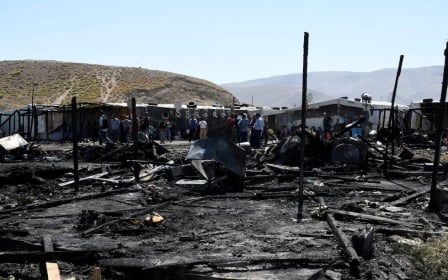