EXCLUSIVE: UK has sold $1bn of weapons to Turkey since coup attempt

Figures revealed on eve of Turkish president's visit to London, and amid criticism of Ankara's crackdown on alleged coup plotters and war in Syria LONDON - Theresa May is set to roll out the red carpet for Turkish President Recep Tayyip Erdogan this weekend, as new figures reveal that Britain has sold more than $1bn of weapons to Ankara since the failed 2016 coup and subsequent crackdown under emergency powers, Middle East Eye can reveal.

Turkey remains a "priority market" for British weapons, despite concerns from human rights groups and EU officials over the erosion of the country's rule of law.

Turkey is a fellow member of NATO and has cooperated with the EU in tackling the refugee crisis, but critics say that Erdogan's government has arrested or sacked more than 100,000 state workers and members of the military in the wake of the coup attempt.

Unlike many other Western allies, London spoke out quickly after the coup, in which fighter jets bombed the Turkish parliament and troops opened fire on civilians.

But the UK has remained largely silent as Turkey targeted not only the alleged plotters but also political dissidents, journalists and members of pro-Kurdish parties for "supporting terrorism".

Erdogan will meet the Queen and the prime minister during his three-day visit to the UK, starting on Sunday. It comes as the UK is making a Brexit push to boost trade with Ankara, but also in the middle of a snap Turkish parliamentary and presidential campaigns conducted under a state of emergency.

It also includes a $135m deal for BAE Systems to fulfil Erdogan’s plan to build a Turkish-made fighter jet.

The jet deal was signed by May in January 2017 under an "open licence" to ease the transfer of military technology, and UK officials now reportedly wish to expand the deal by pushing for Rolls-Royce to win the engine contract.

Lloyd Russell-Moyle, a Labour MP who recently travelled to northern Syria, where Turkey is involved in operations against the Kurdish YPG militia, told MEE: "The government has been increasing arms sales to Turkey as it has fallen into authoritarianism at home and warmongering abroad.

"The government should be finding ways to protect our allies from Erdogan’s aggression but it instead rewards Turkey with new arms contracts. The government is putting private profit over both human rights and global security.

He added: "10 Downing Street under Theresa May has become a revolving door for the world’s biggest tyrants, who are also our biggest arms customers."

Turkey says the aim of its intervention in Afrin, a Kurdish canton in Syria's northern Aleppo province, is to counter the YPG, which it considers a terrorist group and an extension of the banned Kurdistan Workers’ Party (PKK), which has fought for Kurdish autonomy in Turkey for more than 30 years.

Russell-Moyle claimed there was evidence that UK-made arms had been used by Turkey in northern Syria. The British government has said it cannot categorically state that UK weapons are not in use in Turkish military operations in Afrin.

Erdogan as a global statesman?

Andrew Smith, a director of Campaign Against Arms Trade, which compiled the figures on weapons sales, added that Erdogan is using the visit to London to "project an image of himself as a global statesman, rather than the tyrant he is".

Smith told MEE: "By arming and supporting Turkish forces, the government is making itself complicit in the abuses that are being carried out.

"The last thing Theresa May and the Queen should be doing is giving him the legitimacy and endorsement of such a high-profile visit."

By arming and supporting Turkish forces the government is making itself complicit in the abuses that are being carried out.

UK diplomats say they regularly raise human rights issues with Turkey, and that Ankara is a key partner in countering terrorism, as well as on refugee issues, given its strategic border with Syria, Iraq and Iran.

"This visit is an opportunity for Theresa May to show the president that human rights and a thriving civil society in Turkey are a priority of the UK," she said.

According to Amnesty's latest report, a nationwide crackdown in Turkey has resulted in mass arrests and the "near-destruction" of Turkey’s legal system.

It also noted that the post-coup attempt state of emergency had been renewed on seven occasions, and that more than 100,000 public sector workers have been arbitrarily dismissed.

The report noted that journalists, academics, human rights activists and others have been arrested, prosecuted and handed prison sentences.

The European Commission, meanwhile, has recommended that Turkish accession to the EU should remain on hold because of concerns about human rights abuses.

May's close relationship with Erdogan is at sharp odds with the tone of the Brexit campaign, when prominent anti-EU campaigners accused Brussels of "appeasement" towards Turkey, and warned that "democratic development had been put into reverse under Erdogan".

In 2016, her foreign secretary, Boris Johnson, won a free speech competition in the Spectator for a poem which derided the Turkish leader for his efforts to prosecute a German comedian for an offensive poem.

Kurdish groups are expected to plan protests throughout Erdogan's visit to London.

A spokesman for the Department for International Trade, the government department which oversees arms exports, told MEE: “The UK government takes its export control responsibilities very seriously and operates one of the most robust export control regimes in the world. We rigorously examine every application on a case-by-case basis against the Consolidated EU and National Arms Export Licensing Criteria, with risks around human rights abuses being a key part of that process.

“A licence will not be issued if to do so would be inconsistent with any provision of the mandatory Licensing Criteria, including where we assess there is a clear risk that it might be used in the commission of a serious violation of International Humanitarian Law.” 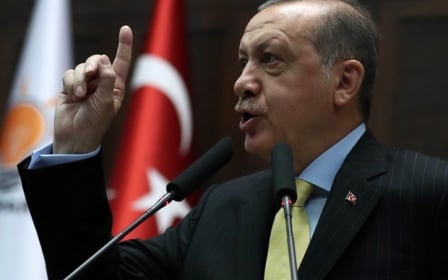