With no Republican candidate in the race, Tlaib will almost certainly become the first Muslim woman in Congress after the general election takes place in November.

The safe Democratic seat had been held by veteran lawmaker John Conyers since 1965. He resigned earlier this year after sexual harassment allegations against him.

"She's not your typical politician," Tlaib supporter Isra Daraiseh ‎said of the soon-to-be congresswoman. "She says what she means and she does what she says."

Daraiseh also called Tlaib a role model because of her dedication and "authenticity".

Detroit is really suffering, and I have seen firsthand what Rashida is doing with her constituents.

The mother-of-two ran a progressive anti-establishment campaign with a focus on environmental protections and opposing tax cuts for big corporations and she has not shied away from the Israeli-Palestinian issue.

Dozens of Tlaib's supporters gathered at a Detroit venue on Tuesday, erupting in frantic cheers with each update on the results that showed their candidate in the lead, as if their favourite football team had scored a goal.

When they were not staring at the screen, the activists danced to hip hop music. As soon as the DJ played the Arabic folk song, My blood is Palestinian, Tlaib's Arab and non-Arab supporters formed a dabke ring with a Palestinian flag waving behind them.

Community organiser Nada al-Hanooti described Tlaib's victory as "revolutionary" for Detroit and Arabs and Muslims in the US.

"I think it is a step in the right direction," al-Hanooti told MEE. "Detroit is really suffering, and I have seen firsthand what Rashida is doing with her constituents."

Tlaib, the oldest of 14 children, told MEE back in March that while growing up in Detroit, she saw parallels between the civil rights movement in the US and the Palestinians' struggle for justice.

The former state legislator added that she hopes to bring a "unique perspective" by advocating for equal rights for both Palestinians and Israelis. She said she is not afraid to stand up to "right-wing extremists" who attack anyone critical of Israel's policies.

"I have been very clear to everyone who has asked about this issue that I see everything through a human rights lens," Tlaib said.

El-Sayed, who was endorsed by former presidential candidate Bernie Sanders, won more than 30 percent of the votes in the statewide race. His candidacy defied public opinion polls that had him far behind in the contest.

Tlaib defeated a crowded pool of candidates on Tuesday, which included Detroit's popular city council president Brenda Jones, who was backed by the mayor and powerful labour unions.

Although the Detroit area is home to large Arab and Muslim communities, they were not a major constituency in Tlaib's district. Her supporters say that proves that she won based on her policy proposals and track record in government.

Khaled Beydoun, law professor and author of, American Islamophobia, said Tlaib's election as the first Muslim woman to Congress is a "landmark moment".

"Rashida is always going to be known as the trailblazer in this regard, and I'm happy that it's a progressive woman trailblazer." US Politics
'The energy is real': Muslim Americans fired up over midterm elections 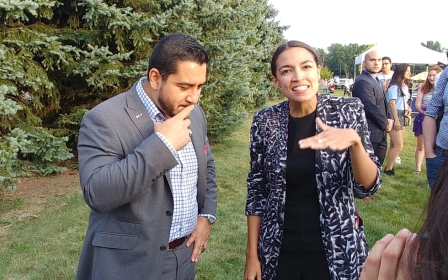 US Politics
‘Staying out of the ring is not an option’: Palestinian woman runs for Congress