Flag-draped Algeria fans show their love for the Desert Foxes Loyal Algeria fans watched with bated breath on Monday night in Algiers as their team faced hotly-tipped contender Germany. Algeria managed to break through to the knock-out stage for the first time in their history, and hopes were high that the team might continue their winning streak.

Algeria’s footballers were not just playing to make history – they were also aiming to settle their decades-old gripe with Germany over the so-called Disgrace of Gijón. During the 1982 World Cup, the West German and Austrian allegedly colluded in the play-off rounds to ensure that they went through and squeezed out Algeria. West Germany went on to play in the final, and the pain of being denied a chance at glory still rankles Algerians.

Three decades later, Algeria faced an early setback for Monday's game when Shaheen the World Cup-predicting camel picked Germany to win. The team, which garnered the support of many football fans across the Middle East and North Africa, held Germany at bay throughout the 90 minutes of normal time with 37 percent of possession. And fans were treated to an additional half-hour of nail biting, scoring once in extra time, but letting in two goals from their adversaries.

Now, the 5,000 dedicated Algerian supporters who followed their team to the championships and painted Brazil green in the process, will be coming home disappointed. But having proved their prowess, delivering one of the championship’s most satisfying matches in a bout against South Korea, the Desert Foxes can hold their heads high. 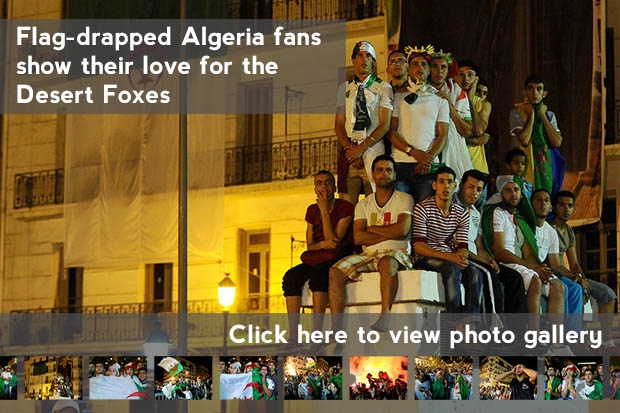 Sport
World Cup 2014: Who are you supporting?