Former US Secretary of State John Kerry has denied allegations that he leaked classified information about Israeli operations in Syria to Iran's foreign minister.

Kerry has come under fire from Republicans in US Congress after a leaked audio recording surfaced where Iran's chief diplomat, Mohammad Javad Zarif, recalled an encounter with his former US counterpart.

In the recording, Zarif said Kerry informed him that Israel had attacked Iranian interests in Syria at least 200 times. The Iranian diplomat met the disclosure with astonishment, although did not reveal when the conversation took place. "I can tell you that this story and these allegations are unequivocally false. This never happened – either when I was secretary of state or since," Kerry tweeted on Monday.

The claims have led to calls for Kerry to resign from his role as the Biden administration's special envoy for climate.

"If these are true, it should go beyond him just resigning," he said.

Republican Senator Dan Sullivan told Politico that there had been discussions "about treason - and I don't throw that word around a lot".

Nikki Haley, a former Trump administration envoy to the UN, demanded answers from both Kerry and President Joe Biden.

"Biden and Kerry have to answer for why Kerry would be tipping off Iran, the number one sponsor of terror, while stabbing one of our greatest partners, Israel, in the back," she tweeted.

During a news conference on Monday, White House press secretary Jen Psaki did not confirm or deny the authenticity of the alleged remarks, and said the administration was "not going to comment on leaked tapes".

The US State Department has not released a statement on the issue. However, department spokesman Ned Price, while saying he could not comment on the audio's authenticity, appeared to suggest that the information allegedly leaked by Kerry was already public knowledge.

"I would just make the broad point that if you go back and look at press reporting from the time, this certainly was not secret," Price told reporters on Monday.

"And governments that were involved were speaking to this publicly, on the record."

In 2018, Reuters reported that an Israeli official confirmed Israel executed more than 200 attacks against Iranian targets in Syria over the previous two years.

Boycott
Ben & Jerry's settlement boycott sparks anger in yet another US state
Egypt Turmoil
US Senator Murphy sounds off against unconditional aid to Egypt
Pegasus spyware
Pegasus: US lawmakers call out NSO without mentioning Israel 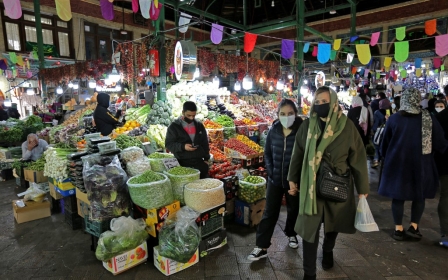