A French policeman who died after offering himself in exchange for a hostage in a supermarket siege was hailed a hero on Saturday, as anti-terror investigators probed the most serious attack of Emmanuel Macron's presidency.

Lieutenant-Colonel Arnaud Beltrame, 45, was shot and stabbed after taking the place of a woman whom gunman Radouane Lakdim had been using as a human shield during Friday's attack in the southwestern town of Trebes near the Pyrenees mountains.

Beltrame, who once served in Iraq, died of his wounds early on Saturday, becoming the fourth victim in the shooting spree claimed by the Islamic State (IS) group.

Macron led tributes to the elite officer, saying Beltrame "died a hero" and deserved "the respect and admiration of the whole nation".

The Grand Mosque of Paris, the largest in the country, said the Muslim community joined in mourning for a man who had "fallen heroically under the bullets of the terrorist Redouane Lakdim in the exercise of his mission."

British Prime Minister Theresa May hailed Beltrame's courage and sacrifice on Twitter, saying they would never be forgotten.

The 25-year-old gunman had already killed the supermarket's butcher and a customer before shooting Beltrame, prompting police to move in and kill the attacker.

Earlier Friday, Lakdim hijacked a car in nearby Carcassonne and shot the two people inside, killing the passenger and leaving the Portuguese driver in a critical condition.

He also shot and wounded a police officer out jogging.

“Lieutenant-Colonel Arnaud Beltrame has passed away. He died for his country. France will never forget his heroism,” Interior Minister Gerard Collomb wrote Saturday on his Twitter account.https://t.co/ZWUWutaIeS

Lakdim, a petty criminal who had been monitored over fears he had been radicalised, was armed with a gun, knife and homemade explosive devices, a security source said.

His partner and a 17-year-old friend were in custody as investigators sought to understand events leading up to the attack.

Investigators found notes at Lakdim's home which referred to IS, a legal source said, including a hand-written letter in which he claimed allegiance to the group.

The shootings come as France remains on high alert following a string of deadly attacks that have killed more than 240 people since 2015.

Lakdim, a Moroccan-born French national, fit a familiar profile as a petty criminal who had turned to extremism.

A small-time drug-dealer, his rap sheet included convictions for carrying a banned weapon and for drug use. He spent a month in jail in 2016.

"He had been on a watchlist for his radicalisation and links to the Salafist movement," said top anti-terror prosecutor Francois Molins.

But Interior Minister Gerard Collomb said that ultimately, authorities had concluded Lakdim did not pose a risk. "He did this suddenly," Collomb said.

Evolving nature of IS

Lakdim burst into the supermarket "shouting 'Allahu Akbar' (God is greatest) and saying he was a soldier of the Islamic State, ready to die for Syria," Molins said.

He further demanded the release of certain prisoners - notably, according to a security source, Salah Abdeslam, prime suspect in the November 2015 Paris attacks.

IS claimed the attack was in response to its call to target Western enemies, as is customary when the assailant has pledged allegiance to the militants.

Experts said the attack showed the evolving nature of the IS threat, seeking to inspire lone-wolf attacks in its name as its self-proclaimed "caliphate" in Syria and Iraq crumbles.

"The persistence of the homegrown threat has largely escaped public debate in comparison to concern over jihadists coming home after fighting in Syria and Iraq," said Jean-Pierre Filiu, Middle Eastern Studies professor at Sciences Po university.

France has suffered a series of major attacks over the past three years, including the massacre at the satirical newspaper Charlie Hebdo, the November 2015 attacks that killed 130 in Paris, and the 2016 Bastille Day truck attack in Nice that killed 84.

A state of emergency after the Paris attacks was only lifted in October and thousands of troops continue to patrol the streets under an anti-terror operation.

Beltrame is the ninth police officer or soldier to be killed since 2012 by militants in France, a country that is part of the US-led coalition fighting IS.

Beltrame was a qualified parachutist who served in Iraq in 2005. He also worked as part of the elite Republican Guard that protects the presidential Elysee Place offices and residence in Paris, Macron said.

The attack has rocked Trebes, a sleepy town of 5,000 located on the picturesque Canal du Midi.

"We thought this only happened in big towns," said a 52-year-old restaurant owner who gave her name as Khadija.

Supermarket boss Samia Menassi, whose store remains closed and surrounded by police tape, was still in shock on Saturday as she recalled hearing the first gunshots.

"I said to the girls, 'Call the police, there's a terrorist in the shop'," she told AFP.

"We felt powerless because we still had colleagues in there."

Of about 50 people in the store at the time, most were able to get out through an emergency exit, some after sheltering in a meat refrigerator.

The news of Beltrame's death was first announced by France's interior minister, who said in a Twitter post: "Dead for his country. France will never forget his heroism, bravery and sacrifice." 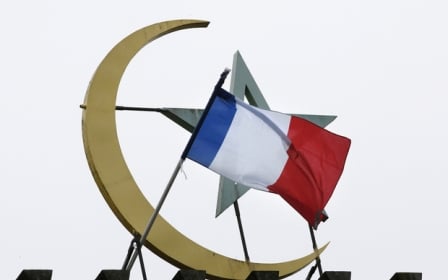