By becoming speaker, Gantz, right, all but conceded that Netanyahu, left, would remain prime minister (AFP)
By
MEE and agencies

Israeli Prime Minister Benjamin Netanyahu and his main rival Benny Gantz have missed a midnight deadline to reach a unity government deal but agreed early on Thursday to continue talks.

Even the medical and economic crises brought on by the coronavirus outbreak have so far failed to end an unprecedented political deadlock that has pushed Israel into three inconclusive elections in the last year, and perhaps now a fourth.

Gantz and Netanyahu have been negotiating a power-sharing deal that would keep the right-wing premier in office for another 18 months, Israeli media reported. Under the arrangement, former general Gantz would take over after that.

Gantz, a relative newcomer to politics, was given the first chance to put together a government after the most recent election, in March.

After being elected Knesset speaker, Gantz pledged to use the remainder of his grace period to seek a deal with Netanyahu.

But he was unable to do so given the bitter divisions within the anti-Netanyahu parliamentary bloc.

President Reuven Rivlin, who is overseeing the talks, said on Monday that progress justified his decision to grant Gantz a two-day extension to hash out a deal with Netanyahu.

But Gantz's mandate expired at midnight on Wednesday after a last-minute attempt by the two leaders' envoys to clinch a deal.

That complicates plans for economic recovery once the coronavirus outbreak is brought under control, and the country's stringent lockdown is eased.

Without a deal, it will be up to parliament to pick a candidate who would then have 14 days to form a government.

Failure to do so would automatically dissolve parliament and trigger a snap election.

Netanyahu and Gantz released a joint statement early on Thursday saying they would continue negotiations later in the day. Talks technically can continue until parliament is formally dissolved.

Gantz had previously said he would not serve in a government led by Netanyahu, who is facing several corruption charges but denies any wrongdoing. The trial is due to begin next month.

The decision to break his campaign promise and to consider a deal with the premier angered many of Gantz's anti-Netanyahu supporters and triggered the break-up of his original Blue and White alliance.

Gantz claimed his move was necessary to ease the grinding political deadlock and strengthen Israel's ability to confront the pandemic. The outcome appeared to weaken Gantz while strengthening Netanyahu, whose caretaker government is overseeing the country's response to the coronavirus crisis.

By becoming speaker, Gantz all but conceded that Netanyahu would remain prime minister, at least through the first part of any prospective unity deal.

But obstacles emerged during coalition talks.

The sides were reportedly split over the choice of the justice minister, who would be tasked with overseeing the corruption case against Netanyahu.

There has also reportedly been friction about the implementation of US President Donald Trump's widely condemned Middle East plan.

However, earlier this month, the Israeli newspaper Haaretz reported that Netanyahu and Gantz had reached an agreement to illegally annex parts of the occupied West Bank.

A Monday poll from Israel's Channel 12 news said that if an election were held now, Netanyahu's Likud party would see a four-seat boost to 40 in the 120-member Knesset, while Gantz's weakened Blue and White party would win only 19.

The poll also found that some 64 percent of citizens were satisfied with Netanyahu's handling of the pandemic, Reuters reported.

Restrictions have confined most Israelis to their homes, forcing businesses to close and sending unemployment to more than 25 percent. 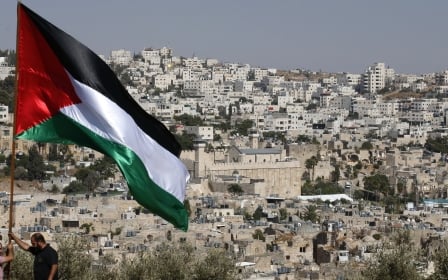 Analysis
Shock, betrayal and fear: Why Gantz killed his party to join Netanyahu