A ban on the export of used batteries, and an inability to import the equipment needed to safely recycle them due to Israel's blockade, has hit businesses and left workers ill 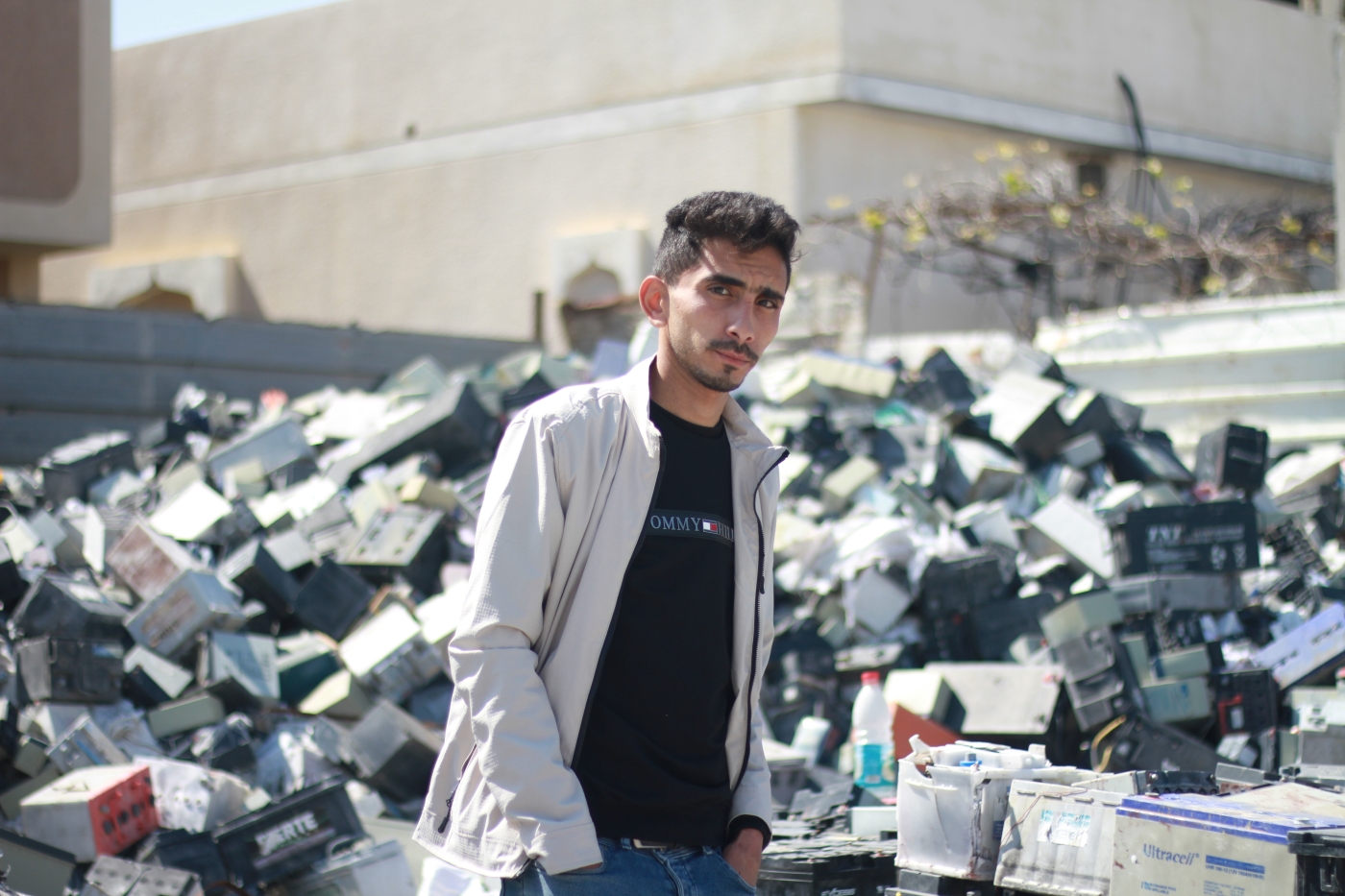 Ibrahim Baraka has hundreds of tonnes of old and discarded batteries in his workshop in the Gaza Strip, March 2022 (MEE)
By
Ahmed Al-Sammak
in
Gaza, occupied Palestine

Israel bombed Gaza's sole power plant in 2006. Since then, the supply of electricity has been reduced to just a few hours a day and the coastal strip has relied on batteries as an alternate source of electricity.

But in 2008, Israel banned the besieged enclave from exporting the batteries. Israeli authorities argued that the batteries would have to pass through the Karam Abu Salem crossing, the sole commercial crossing between Gaza and Israel, and that they did not have a special detector to check whether anything was being smuggled inside them.

Israel's Ministry of Environmental Protection also says the used batteries are dangerous for the environment.

The ban has left people like Baraka, one of 17 battery traders in the strip, desperate and in danger.

"I still store them in the hope that Israel will allow us to export them," Baraka, the assistant manager of his family's business, told MEE.

"I swear to Allah, if I had another job, I would replace it without a second thought."

Despite the export ban, Israel has continued to allow Gaza to import the batteries, with more than  200,000 batteries per annum arriving in recent years. If any Gazan has an old battery, he will sell it to the battery traders who will always buy them, according to Mohammed Musleh, director of the solid waste department at Gaza's Environment Authority.

The traders then sell them on to recyclers who extract the components and use them to give life to other used batteries. The work is more close to repairing than recycling but the common term for the process in Gaza is recycling.

The Gaza Strip has 25,000 tonnes of used batteries, spread around 30 scrap-dealing sites. The sites are run by their owners but are supervised by governmental and local authorities.

"A few of the sites are well-equipped to store them, but others are not," Musleh told MEE.

Mercury and other components of the used batteries are carcinogens.

"They are very dangerous to the environment and human health," said Musleh.

"The problem is because the [Israeli] occupation bans us from exporting them. Also Gaza suffers from a lack of experience to establish a central recycling manufacturer."

"This is a form of collective punishment. It may amount to war crimes." 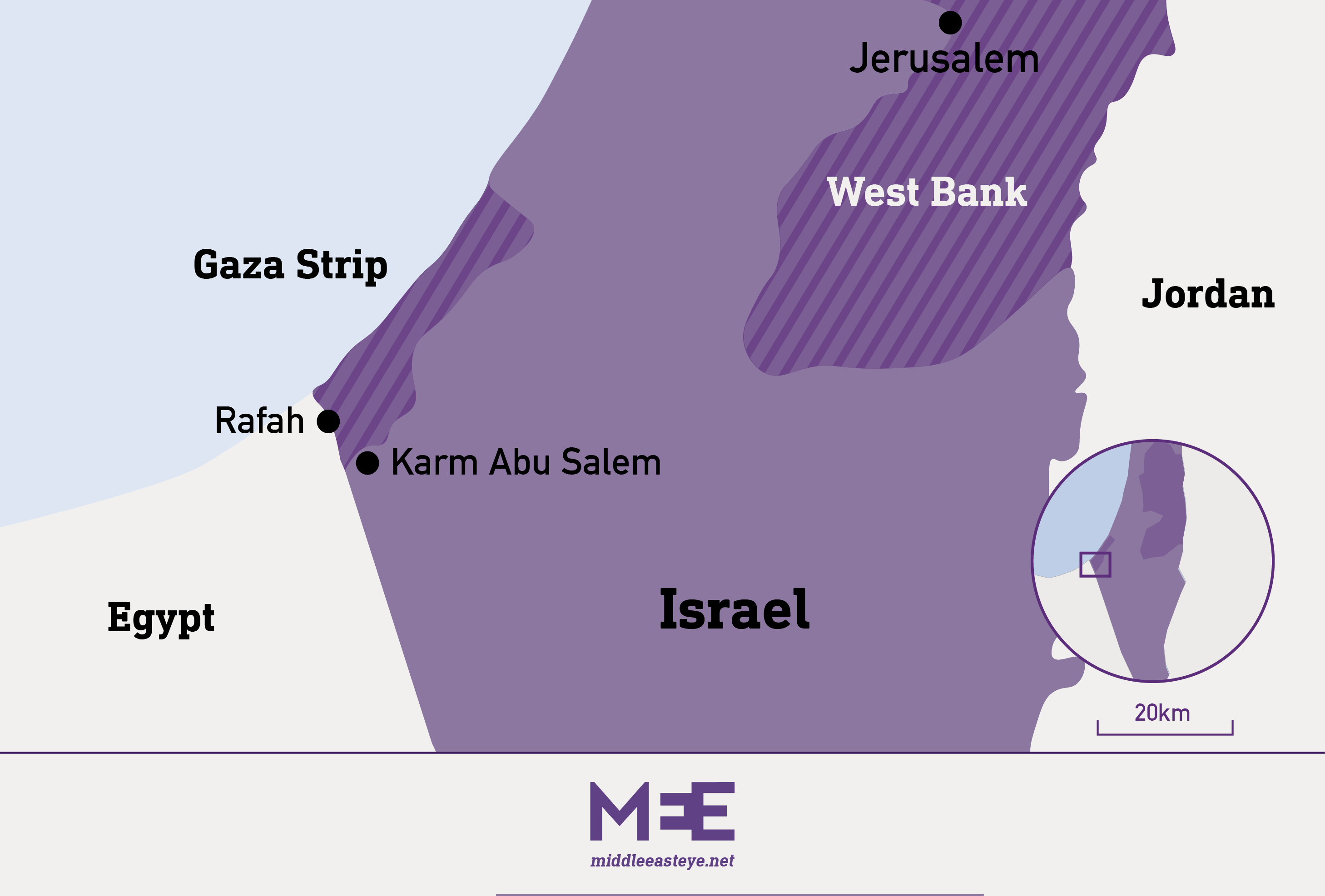 In January, for the first time, Egypt imported 2,000 tonnes of the old batteries through the Rafah crossing from Gaza, paying around 3,190 shekels ($1,000) a tonne for the batteries which cost the dealers 1,800 shekels ($565), Eid Hamada, the official in charge of scrap dealers in the strip, told MEE.

"We have been promised that Egypt will import more quantities in the near future and that Israel will permit us to export from the Karam Abu Salem crossing soon. But they are still promises," said Hamada.

But despite the 2,000-tonne order from Egypt, the scrap dealers in Gaza made virtually nothing on the deal as the order came through two brokerage firms, one Egyptian and one Gazan.

"I would earn nothing if I exported through them. We want to export directly to external companies.

"I have 3,000 tons of these batteries. I don't know why Israel bans us from exporting them. May Allah help us."

But the Israeli blockade means the impoverished strip does not have the proper equipment - including special masks to prevent exposure to gas from toxic mercury, lead and cadmium - for the recycling of used batteries.

As a result, Gazans working in the industry, of which there are around 250, are putting their lives at risk.

After 24 years as a battery recycler, Mahmoud al-Helo, 39, left his job in 2016 after he started suffering from neuritis, an inflammation of the nerves, and bone pains in his legs and back.

"I used to recycle the old batteries and extract their components manually."

During Israel's massacre of Al-Shuja’iya neighbourhood on 20 July 2014, in which at least 60 Palestinians were killed and 200 wounded, most of them women, children and the elderly, Helo's workshop was also flattened.

"They also killed my father and cousin and destroyed my house and workshop," said Helo.

"Later on, I reopened it for some months, but then left it to my brother forever after my daughter Rana, who was six at the time, began suffering, in 2015."

In July of that year, without any prior symptoms, Rana came down with a fever and lost consciousness, before being admitted to the intensive care unit at Gaza's Shifa hospital. As her health deteriorated, she was referred for treatment in the occupied West Bank because Israel would not allow her to receive care in its own hospitals.

"Doctors told me she suffered from inflammation in her brain cells, and the percentage of lead was very high in her body," said Helo.

"I explained my work to them, and they advised me to leave my business for my children's health and mine. Months before Rana's illness, my son Sobhy used to go into spasms almost daily.

"Neither the doctors nor I knew the reason at that time... Now they are good, but there is a black layer on Rana's, Sobhy's and my teeth. We tried hard to remove it but failed."

When working with the batteries, Helo told MEE he did not wear any special clothes or masks or use any special equipment.

"Why did I not use special equipment? We have been under blockade." Sarcastically, he adds: "We are lucky that we have oxygen to breathe."