With a gas crisis looming, Gazans are resorting to increasingly desperate measures in order to heat food and themselves GAZA CITY - It is a “cruel punishment”. That’s how Monther Abujebba, a manager of a gas station in eastern Gaza City, described the Israeli-Egyptian blockade of Gaza, and the current gas crisis gripping the coastal Palestinian enclave, home to 1.8 million people.

“Israel knows and sees that we need gas, and they only give the amount for our most basic needs … the moment we almost reach an end to the fuel crisis, they cut off the gas supply again,” explained Abujebba.

Historically, Gaza’s domestic cooking gas has come through Israel. On average each cylinder costs 66 Israeli Shekels ($US17). The gas comes in through the Kerem Shalom crossing, Gaza’s only commercial crossing which is under Israeli control.

With the arrival of winter and Gaza experiencing a severe shortage of gas, many Palestinians are unable to fulfil basic daily needs, such as cooking food and heating their houses.

Hajjah Aminah said she has not cooked for the past month because of a lack of gas. Instead, she collects pieces of cardboard from a nearby supermarket to burn. “Our only option now is eating food straight from the can, which means no hot food this winter,” she said.

Empty gas cylinders in the streets

Even before the establishment of the Palestinian Authority in 1993, the only reliable source of gas for Gaza was what came in through Israel. However, some gas was smuggled in through tunnels from Egypt; Gazans were able to buy this for the equivalent of NIS 10, $US2.5 a canister.

In July 2013, after the army seized power in Egypt, most of the tunnels were closed. Now Gazans have no alternative but to rely on gas coming in through Israel which, when it does arrive, is too expensive for many to afford.

According to Mohammed al-Abaadla, spokesman for the Gas Station Owners’ Association in Gaza, Gaza needs 350 tonnes of cooking gas to meet the local population’s daily needs, but Israel allows approximately 200 tonnes in per day, not counting weekends and Jewish holidays, when the border crossing is closed completely.

Abaadla said his association was in contact with the Ramallah-based Palestinian Authority government, who he hoped could pressure Israel to permit the transportation and delivery of more cooking gas.

He stated: “Israel allows gas for only one million inhabitants, as the population [in Gaza] was before. But now there are 1.8 million people in Gaza, so we need double the old quantity.”

Gas merchants in Gaza, meanwhile, say they have paid Israeli suppliers in advance of delivery, but the promised gas has not yet been delivered. “Yesterday we were informed that Israel would permit 14 trucks of gas. But in reality, only three trucks were allowed through, for all of Gaza,” Abujebba said.

None of those three trucks were bound for Monther Abujebba’s gas company, however. As one of the main domestic gas suppliers of Gaza, Abujebba said his station requires 250 tonnes of gas per month, but he gets less than half of that: 100 tonnes.

“How are we supposed to distribute with less than half of the amount, to all the people, restaurants, and small chicken farms?” he said, adding that he struggles to convince hundreds of customers that he has no gas to sell.

In winter, when temperatures can drop as low as 5°C, Gaza residents rely on cooking gas to stay warm. With a shortage of fuel, some taxi drivers have started converting their car engines with special cylinders in the trunk to run on cooking gas. This is despite police in Gaza regularly inspecting cars to ensure that gas is not being used for public transportation, but only for in-house purposes.

Some Palestinians in Gaza have stated that natural offshore gas fields, which Israel and the West are not allowing them to tap into, could be a solution to the problem.

In 2000, the British firm British Gas Group (BG) discovered proven natural gas reserves of at least 1.3 trillion cubic feet beneath Gazan territorial waters worth nearly $US4 billion. Since 2006, when Hamas swept to election victory in Gaza, a long-mooted $US1bn project between Israel, BG and the Palestinian Authority in Ramallah to develop natural gasfields has stalled. With the security situation deteriorating in Jerusalem, cooking gas is no longer a priority demand.

In Gaza City, Middle East Eye witnessed a young man ripping a piece of fabric off furniture to burn, while clouds of black smoke billowed into the sky as a girl in Jabalya refugee camp burned old shoes to bring a pot of water to boil.

Abujebba said he preferred to deliver gas to the mini-chicken farms in Gaza. “Otherwise, the birds die in the cold weather with no heating supply,” he said.

Abu Ayoub, a gas distributor in the Shujaiya neighbourhood of Gaza City, told Middle East Eye that more and more people are waiting for cooking gas, and his supplies do not meet customers’ needs.

“People are running out of patience. Playing around with their food and life can work for sometime, but in the long run they can’t keep silent against their jailers,” he said, referring to Israel.

Mohammed Jundiah, 51, has been arguing with Gaza gas distributor al-Mashrawi for a month to get gas. On Monday, he decided to go, with his small child, to Abujebba’s gas station directly.

“We need solutions. We are families, with children, and can’t manage without gas,” he said.

Jundiah said he has run out of energy to argue with al-Mashrawi. He has also run out of burnable items to cook and feed his seven children.

“We are deprived [unable] to get our own gas which is less than half an hour away from here. But we now live in the age of tyranny, where bullies have the upper hands over our resources.” 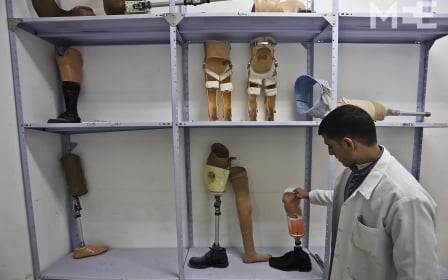