Gulf crisis and gas: Why Qatar is boosting output

Economic power is gradually shifting away from oil to gas-rich nations, which favours Qatar in its dispute with Saudi Arabia and UAE 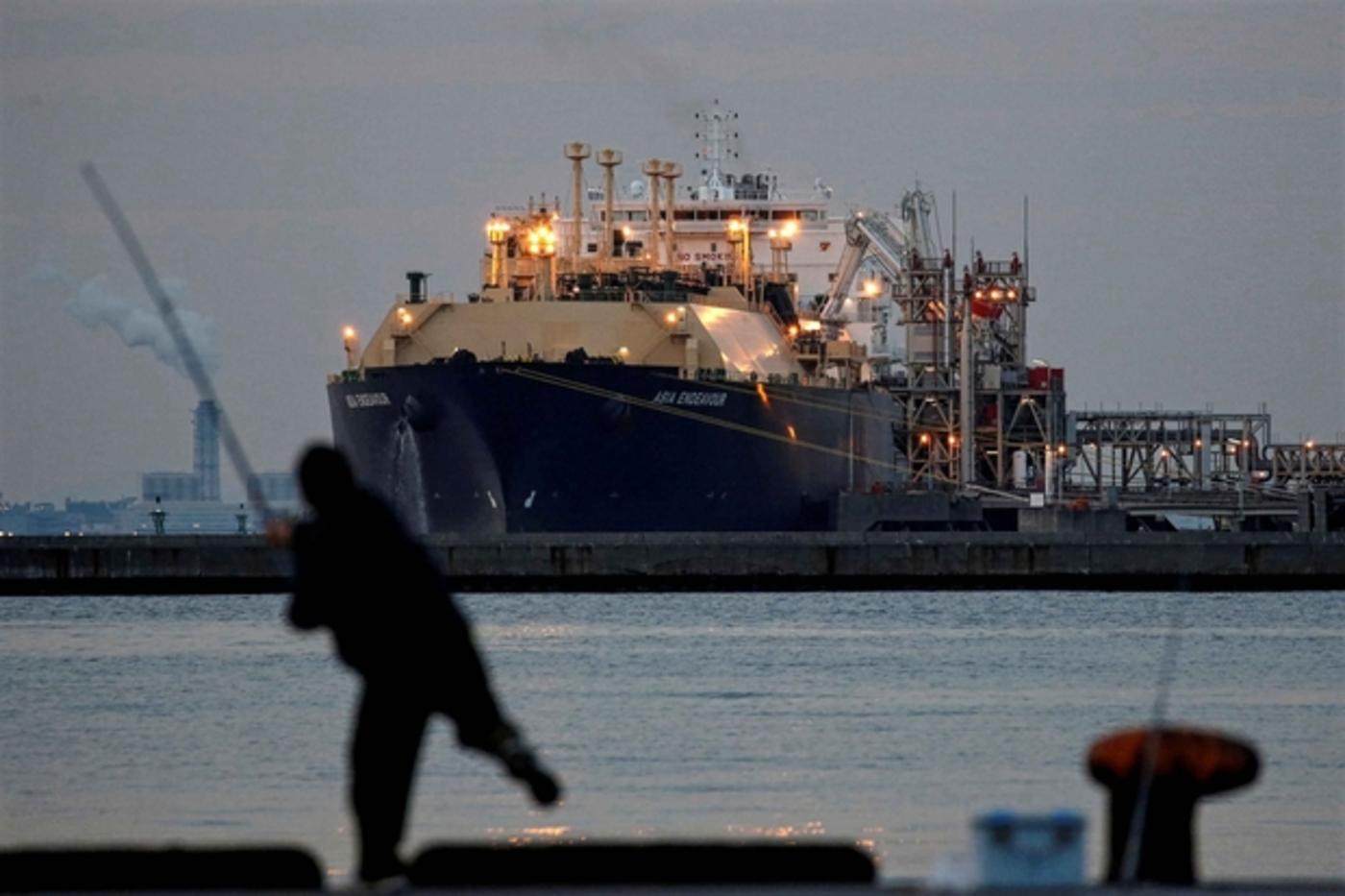 An LNG tanker at a power station in Futtsu, east of Tokyo, Japan on 8 February 2017 (Reuters)
By
Paul Cochrane

Qatar may be under economic siege but it pulled an ace from up its sleeve on 4 July by announcing that it will bolster liquid natural gas production by some 30 percent.

The move will secure Doha's position for years to come as the world's top exporter of LNG.

Naser Tamimi, a Qatari energy analyst, told MEE: "It is a very significant announcement as it will put huge pressure on the LNG projects underway in countries with higher extraction costs. It is also signals that Qatar is fighting for market share."

The announcement is also seen as a shot across the bows of Saudi Arabia and the UAE, the leads in the embargo, that Qatar is not buckling under the pressure.

Roudi Baroudi, the chief executive of Energy & Environment Holding, an independent consultancy in Doha, said: "The bottom line is this was a business decision. If politics had an impact, it was in the timing: it's possible that the move was accelerated in order to signal the country's resolve and ensure that if the siege persists, more revenues will be available to help soften the blow."

Qatar had indicated earlier this year that it would increase LNG output by 15 million tonnes (MT) but it has more than doubled that figure to 33 MT. It brings annual production up from the current world-record of 77 MT to 100 MT.

Analysts have generally downplayed the timing of the announcement, which coincides with Doha rejecting the demands of Riyadh and its allies. 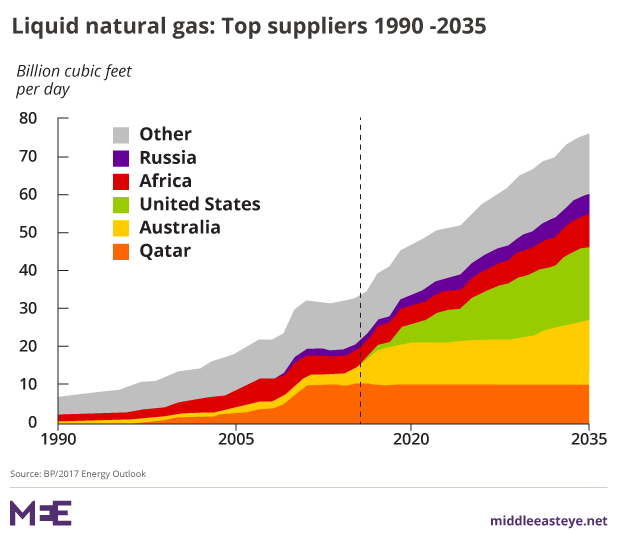 But the move clearly shows that, at a global level, Qatar wields power when it comes to LNG. Claudio Steuer, director of SyEnergy, a UK-based energy consultancy focused on natural gas and LNG value chains, said: "Qatar's timing is impeccable to exploit the weakness in the current US LNG business model, and pre-empt competition from Russia, Iran, East Africa and East Mediterranean."

Australia is scheduled to become the world's largest LNG supplier during the next two years, but it's anticipated that Qatar will then be back on top by 2022 once new production from its huge offshore North Field begins producing.

'US costs are a dollar or two higher than what Qatar pays. If it's a race to the bottom on prices, the US will lose'

The US is also increasing its output and expected to become the world's third-largest LNG exporter by 2020, now that LNG export terminals have come online and the Trump administration is pushing energy exports.

Qatar's increase will ward off such competition, primarily due to lower extraction costs in the North Field and at its liquefaction facilities, especially when compared with fracking in the US.

This will enable Doha to gain market share in countries with rising LNG demand, particularly in Asia, currently the destination for two-thirds of its LNG exports.

"Despite the strong US propaganda, the current US LNG projects costs and business model are not competitive in the growing southeast Asian markets," said Steuer.

He said that as things stand, the high costs of American LNG extraction only becomes competitive at oil prices of more than $60 to $70 a barrel, which will limit the scale of the expected surge of LNG supplies from the US. By way of comparison, oil prices have ranged from $40 to $50 a barrel during the past year. 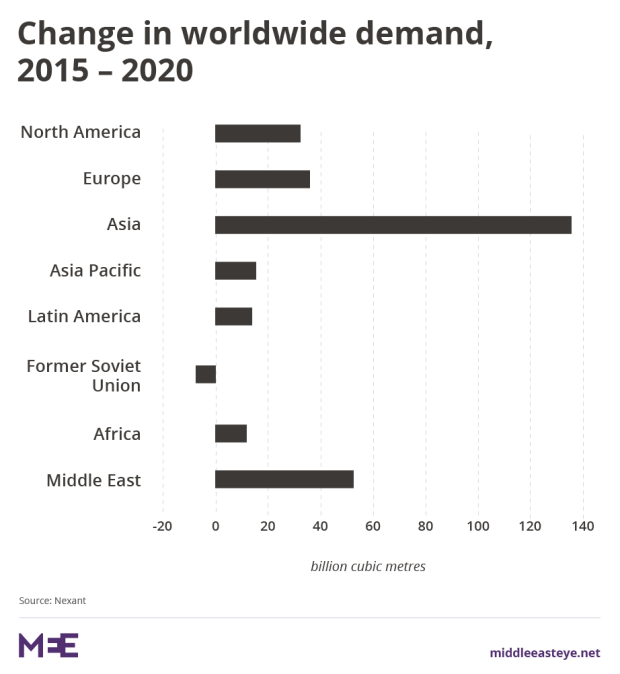 Trevor Sikorski, head of gas and carbon at Energy Aspects, says that US gas producers will need around $8 to $8.50 per million British Thermal Unit (BTU) - a standard unit used for gas - to cover their capital expenditure costs and enjoy a return on their investment.

The Qataris, he said, will want a similar figure to cover investment in their new liquefaction trains - the part of an LNG plant which reduces the volume of the gas by chilling it to liquid form.

"But US costs are a dollar or two higher than what Qatar pays. If it's a race to the bottom on prices, the US will lose."

But Qatar does face one risk: finding long-term buyers of its LNG to secure funding to underwrite the expansion.

Previous LNG projects were greenlit on the expectation of gas prices being double the current $5 to $6 per million BTU. Now, they're struggling.

Qatar has managed to launch out projects, like the RasGas Train 6 - one of 13 liquefaction trains operated by state-owned RasGas and Qatargas - without long-term buyers to guarantee capital expenditures, which eases financing conditions.

Instead it operated on a "merchant basis" that reassures financiers with forecasts of rising demand.

That gamble paid off for Qatar in 2009, when RasGas 6 came online. In 2011 it was given a further boost when it used spare capacity to meet a sudden demand in LNG from Japan after the Fukushima nuclear disaster.

"They've taken that risk before and it worked well. If anyone can take that risk it is the Qataris," said Sikorski.

Riyadh and Abu Dhabi will not be able to use leverage with international oil companies to prevent investment in Qatar. Majors like Royal Dutch Shell, Total and ExxonMobil have already signalled their neutrality

Riyadh and Abu Dhabi will not be able to use leverage with international oil companies (IOCs) to prevent investment in Qatar. Majors like Royal Dutch Shell, Total and ExxonMobil – already heavily involved in Qatar – have already signalled their neutrality in the GCC crisis.

"I do not see any major show stoppers for Qatar in wanting to ramp up production," said Steuer, "as all major oil and gas engineering and service providers would welcome the opportunity to secure new business in Qatar."

The LNG expansion strengthens Qatar's ties with major oil companies while signalling to buyers that Doha can keep taps turned on, despite the crisis.

"Above all else, Qatar Petroleum must be sure it can keep its customers supplied," said Baroudi. "And they're not taking that step alone: they have partnered with some genuine heavyweights of the industry."

A blow to Saudi Arabia?

Opinion is divided as to whether Qatar's announcement raises the regional stakes in the global shift away from oil to gas.

Saudi Arabia and the Emirates, which are not gas exporters, will struggle to match Doha's output.

LNG is considered a cleaner fuel than oil. Major economies such as China, India and South Korea have been moving from coal power plants to gas to reduce pollution.

Steuer said: "As gas is the only fossil fuel with sustainable long-term prospects for the next 25 years, this only reinforces the current tensions involving Saudi Arabia and Qatar.

Oil prices are key to balancing the budgets of Saudi Arabia and the UAE. Each needs target prices of $90 and $60 per barrel respectively in 2017 to balance the books, according to the Institute of International Finance.

'As gas is the only fossil fuel with sustainable long term prospects for the next 25 years, this only reinforces the current tensions involving Saudi Arabia and Qatar'

Asia is considered the battleground between Qatar and Saudi Arabia for energy exports.

"I think the Saudis will lose more than the Qataris, as the Qataris depend on gas and condensate more than oil, which is not their main export," said Tamimi. Oil accounts for around 50 percent of Saudi Arabia's GDP and 85 percent of its export earnings, according to OPEC.

"Saudi Arabia used to have 20 percent share of the Chinese market, in 2011, but in the first five months of 2017 it's down to 11 percent," said Tamimi. "It will be difficult or maybe impossible to regain that."

But while Qatar's LNG increase is equivalent to around 10 percent of global LNG capacity, Sikorski thinks it is "a bit of a stretch" to say that gas will replace oil dependency.

"To me this is a case of, 'Look GCC, we [Qatar] are not dependent on you to make our economy work, we can expand our gas exports if you try to squeeze us, and we will continue to make a lot of money on that.' That was the message to me, rather than saying LNG is the future and oil is dead." 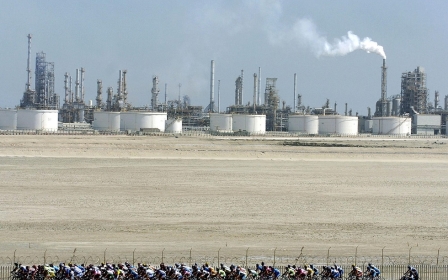 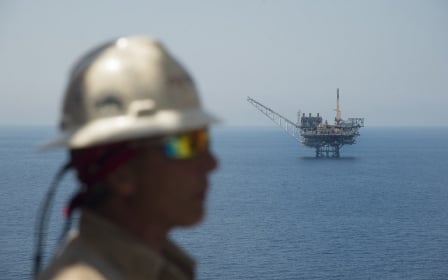 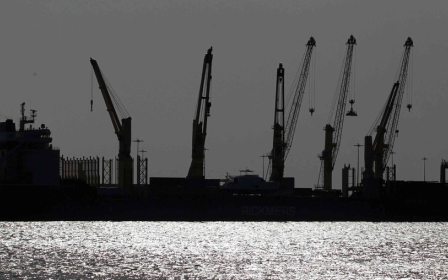 Gulf Tensions
Gas and the Gulf crisis: How Qatar could gain the upper hand