How Ilhan Omar is changing the way Americans talk about Israel

In banning the outspoken congresswoman, the Israeli government only highlighted her effectiveness as a champion of Palestine and human rights 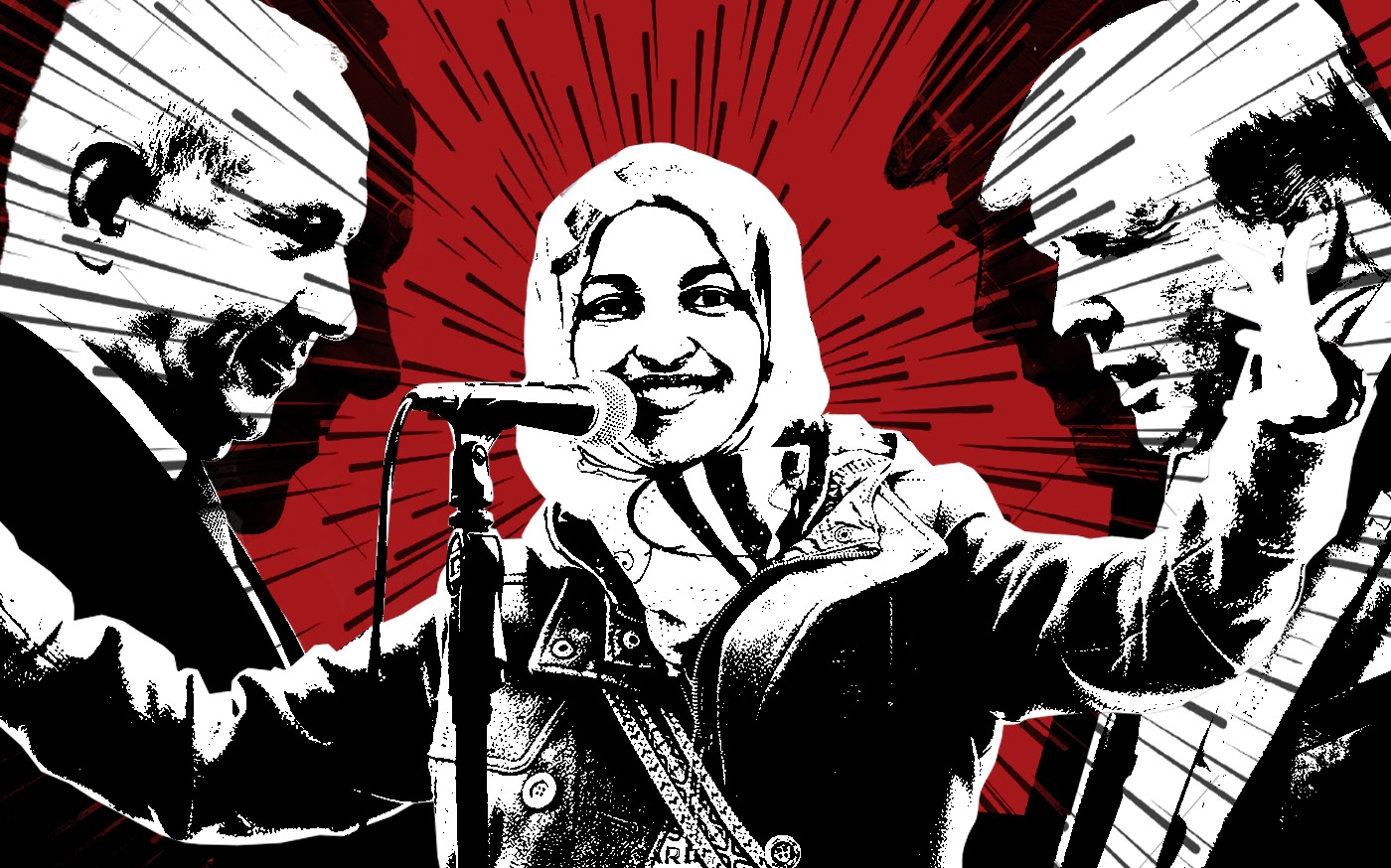 Almost two weeks have passed since outspoken congresswomen Ilhan Omar and Rashida Tlaib were barred from entering Israel and the occupied Palestinian territories.

But the conversation they helped ignite has yet to abate.

When Israeli Prime Minister Benjamin Netanyahu made the announcement on 15 August, much of the media’s attention fell on Tlaib being denied a visit to her ancestral home in the occupied West Bank.

The inability to see her 90-year-old grandmother became a metaphor for the expulsion and banishment that has characterised Palestinian lives for the past 70 years.

Israeli officials later said that Tlaib could visit her grandmother in exchange for her silence, an offer she turned down. The damage, however, was already done.

The idea that two US lawmakers could be banned from America’s closest ally prompted a wave of dissociation with Netanyahu's decision.

Palestinian activists in the US spoke out too, pointing out that this was par for the course for all Palestinians.

“These are unexceptional actions being applied to exceptional people,” Reuben Telushkin, an organiser with the Jewish Voice for Peace activist group based in Detroit, said of the Israeli government's actions to bar the pair.

But once the dust settled, activists and observers turned their gaze to Tlaib’s colleague, Omar.

Where Netanyahu and his ally Donald Trump had opened themselves up to criticism, even attracting a rebuke from top Israeli lobby AIPAC, Tlaib momentarily petitioned Israel for leniency, while Omar seized the opportunity to highlight Israeli abuses.

On 16 August, Omar unleashed a thread on Twitter in which she first dismantled misunderstandings about the purpose of the trip, sharing her itinerary and later the various issues she was hoping to explore.

Israel is the recipient to the tune of $3.8bn in US military aid annually. And Omar wasn’t going to let this moment slip, without pointing that out.

Let’s be clear: the goal of our trip was to witness firsthand what is happening on the ground in Palestine and hear from stakeholders —our job as Members of Congress.

But since we were unable to fulfill our role as legislators, I am sharing what we would have seen. (THREAD)

Asad Abukhalil, a professor at California State University, shared Ilhan’s thread with the comment: “This is the most formidable foe Israel has faced in US politics-ever. No exaggeration. She doesn’t get intimidated by anyone. What a force.”

Likewise, Cornel West, one of the US’s most prominent intellectuals and a professor at Harvard University, said he held “deep and profound admiration for Sister Ilhan’s courage and willingness to speak truth from her heart as it relates to the suffering of precious Palestinians”.

Omar, a former refugee from Somalia who moved to the US in the mid-1990s, has become one of the most compelling political figures in recent American history, and built up a large following among young Americans.

And her outspoken stance on Israel is not exceptional. She has consistently spoken out on issues of social justice, be it on housing or healthcare domestically, or on Saudi Arabia or Yemen when it comes to foreign policy.

On Monday, she became one of the few US lawmakers to issue a public statement on India’s brutal crackdown in Kashmir. 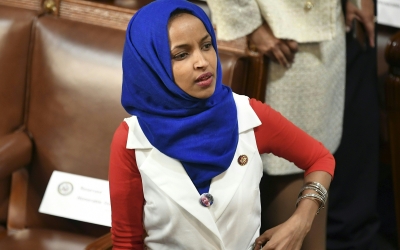 This fearlessness and unflinching will to take on sensitive issues has attracted vicious attacks on her, not least from American Zionist organisations.

“They feel threatened. Ilhan is pushing the public conversation on Palestine in a direction that it has otherwise been really hesitant to accept,” Nylah Burton, a writer based in Washington, tells MEE.

According to Burton, groups like the American Israel Public Affairs Committee (AIPAC), have spent years dehumanising Palestinians and building a consensus that Israeli lives were inherently incompatible with Arabs, only to now find two women of colour in Omar and Tlaib not merely challenging these narratives, but dismantling and producing more accurate ones.

It is the kind of impact that has brought new impetus to activists across the country and forced pro-Israeli organisations into a defensive position.

“She brings universal values of equality and justice to everything she addresses. She is consistent. She doesn’t single Israel out, but because of her identity she gets singled out,” Telushkin, from Jewish Voice for Peace, says.

Amber Harris, from Omar’s district in Minneapolis, is a Jewish American woman married to a Palestinian man from the occupied West Bank with whom she has a child.

Harris has witnessed first hand the routine humiliation meted out by Israeli authorities.

On 19 August, at a press conference organised by Omar and Tlaib in Minneapolis to detail the meaning of Israel's ban, Harris was invited to tell the story of her treatment at the hands of Israeli immigration, including being temporarily banned from Israel for participating in a Black Lives Matter protest in Ferguson.

'She doesn’t single Israel out, but because of her identity she gets singled out'

Harris says she was only able to manage the humiliation and financial hurdles meted out to her because of her “privilege as a white Jewish-American”, and that she knew of “hundreds of stories of other women, who are Muslim, especially Palestinian, who may never be allowed to return solely for the identities they hold”.

Recounting the experience to MEE at Omar and Tlaib's news conference, Harris said she could not believe she was standing with representatives from US Congress speaking so openly and on national television about the Israeli occupation. As someone who now has a son with a Palestinian man, she felt Tlaib and Omar were helping pave the way for his return to Palestine.

"Ilhan's bravery to stand up to all of this and ability to disregard what is 'socially acceptable to say' and always stand up for what is right, she is making others brave," Harris said. "She is setting a bar for others and its higher. She is breaking the ceiling for herself, for women of colour, for Palestinians and being an ally."

While recent events are likely to push the conversation further, Noura Erakat, a Palestinian American human rights attorney and legal scholar, cautions against making sweeping assertions about the meaning of this moment.

Erakat, author of Justice for Some: Law and the Question of Palestine told MEE that she sees the outrage against Israel as part of an incremental shift over the last 20 years.

“The fact that Ilhan or Rashida can openly endorse BDS today reflects the work of those 20 years,” she said, referencing the Boycott, Divestment and Sanctions movement aimed at pressuring Israel into ending its occupation and abuses of Palestinians.

“They are pushing the needle further, but they are not the new conversation, except for those who haven’t been paying attention.”

When it comes to the question of a revival of the Jewish left in the US, Erakat says she will wait for the same organisations to show support for the right of Americans to boycott Israel on political grounds, before agreeing that a meaningful shift has taken place.

Over the past few years, Israel’s US allies have been pushing unconstitutional legislation to criminalise the Boycott Divestment and Sanctions campaign in the United States.

'Omar and Tlaib are pushing the needle further, but they are not the new conversation, except for those who haven’t been paying attention'

Currently 28 states have passed legislation that either restricts or bans the attempt to boycott Israel.

“Protecting the right to boycott would be about protecting ideals rather than trying to dissociate with something Trump supports,” Erakat says, in reference to the widely held belief that Omar and Tlaib’s ban was partially influenced by the US president.

West, from Harvard University, says Omar and Rashida’s interventions on the question of Palestine may be unprecedented for US politicians, and possibly an indictment on other "Black American politicians who have not had the courage to speak fearlessly about Palestine".

“We know these struggles are connected. It is hard to say what has shifted. But we are definitely at a fork in the road,” West adds.

For organisations like Reviving Sisterhood, a Minneapolis-based organisation that trains and supports Muslim women towards impacting social change, Omar’s steadfastness in the face of such fierce critisism over Palestine is but another example of leadership.

"I visited Jerusalem two years ago, and when we asked Palestinians what can we do, they always said tell the world what you see here,” said Nausheena Hussain, executive director of Reviving Sisterhood.

For her, Omar’s message was clear.

“She may not have been able to enter Israel or Palestine but her voice was not silenced. We, too, won't be silenced, either." 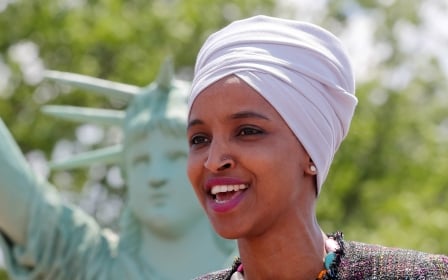 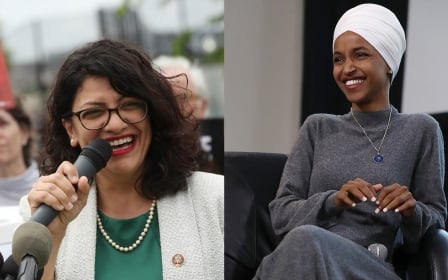 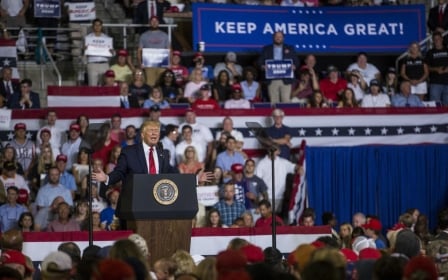