How Iraq's Sinjar became a battleground between Turkey and Iran

After the Islamic State onslaught on the home to Yazidis, Abu Mahdi al-Muhandis saw an opportunity. Now the northern town has become a nest of intrigue 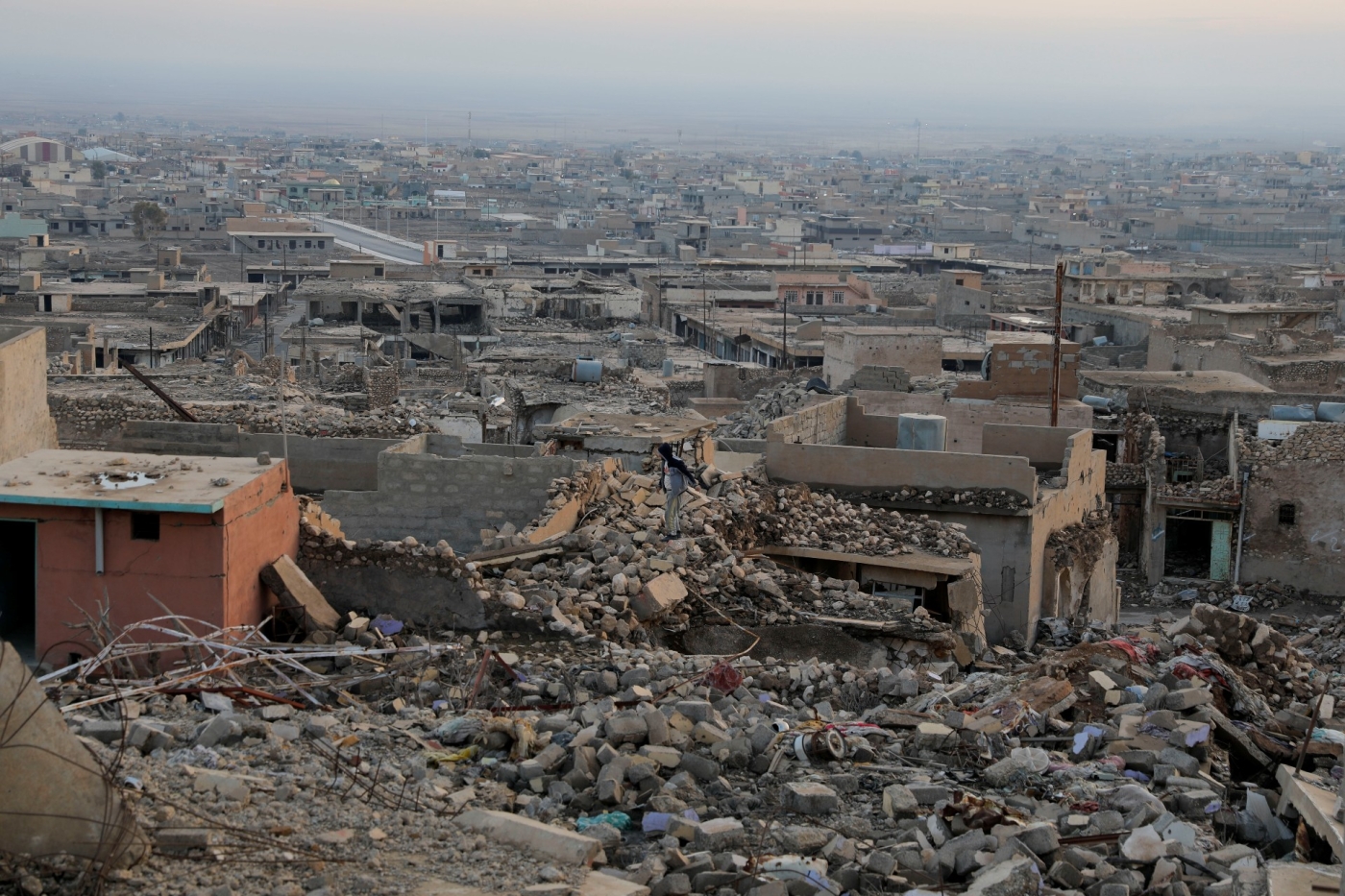 Destroyed houses in northern Iraq's Sinjar, where Islamic State group carried out a genocide against Yazidis (Reuters)
By
Suadad al-Salhy

Sinjar, home of Iraq's Yazidis, has become a nest of intrigue and conflict, a place where nations, spies and armed factions scramble to gain a foothold and consolidate their influence.

The two most prominent powers in the border town that have emerged in recent months are Turkey and Iran.

Both are linked to a network of local and federal Iraqi officials, political and military leaders and armed factions, who have been working to implement the two countries' agendas for years without disturbing the balance of power between them.

However, Turkish military operations in and around Sinjar targeting the PKK Kurdish militant group and its local Iranian-backed allies have intensified the tension in the area and may lead to the outbreak of fighting between Iran and Turkey's proxies, observers and Iraqi officials told Middle East Eye.

Armed clashes erupt from time to time, mostly between the Iraqi army forces deployed in the vicinity of Sinjar and a local affiliate of the PKK. Last month, the clashes lasted for four days. Five people were killed, including a soldier, military sources said.

Eight years after the Islamic State group (IS) tore through Sinjar in a murderous rampage against the Yazidis, 70 percent of the town's population is displaced, and it remains unsafe.

The situation is increasingly a concern for the international community. As the International Crisis Group, a Brussels-based conflict resolution organisation, put it in a recent report: "Because of the armed groups it is hosting, Sinjar finds itself increasingly at the centre of competition between Turkey and Iran."

A magnet for armed factions

Lying close to the Syrian border 140km northwest of Mosul, Sinjar is one of several towns that lie in a disputed area between the authorities of the federal government in Baghdad and the semi-autonomous administration in Kurdistan's Erbil.

Although many sects and ethnicities live and lived in Sinjar and its environs, Yazidis make up the majority of its population.

They lived there in relative obscurity until August 2014, when IS fighters overran Sinjar, murdering and capturing thousands of its Yazidi and Shia men, women and children. Thousands more fled for mountaintop caves, and were surrounded by IS until US air strikes helped push the militants back. Iraq: No church, no community, no future spouses for Sinjar’s only Christian returnees
Read More »

But this help came at a price, a senior Iraqi official told MEE. Washington and its allies accused the rise of IS and the Iraqi military's collapse on then-prime minister Nouri al-Maliki's "sectarian policies, marginalising Sunnis and Kurds, and allowing corruption and nepotism to spread in state institutions," the official said. They refused to intervene militarily unless Maliki stepped down, he said.

Already, Iran's Qassem Soleimani, commander of the elite Quds Force, and his pointman in Iraq, Abu Mahdi al-Muhandis, were personally overseeing battles between Iraqi armed factions and IS around the Shia-majority towns and cities north of Baghdad.

Maliki, Soleimani and Muhandis were meeting almost daily "to follow up on the latest developments and take the necessary measures to curb the militants," a commander of an Iranian-backed Shia armed faction recalled.

There was little time, and there were no safe corridors to Sinjar to move Iranian-backed armed factions in to evacuate the town's displaced because IS controlled all the surrounding towns and cities.

According to a senior Iraqi official involved in minority affairs, Soleimani and Muhandis instead suggested asking for the help of Kurdish armed groups in eastern Syria to "urgently intervene to provide the required protection for the trapped Yazidis and Shia, until an appropriate solution is found".

Maliki approved the proposal and assigned the task to a top senior Iraqi National Security Agency official, the official said.

'The forgotten town turned into a magnet: it attracted the largest number of intelligence services and armed groups in the region'

The Kurdistan Workers' Party (PKK), which since the 80s has been in conflict with the Turkish state, and its Syrian affiliates, such as the YPG, were the most prominent groups approached.

To buy time and recruit more people for the rescue operation, Baba Sheikh Khurto Hajji Ismail, the Yazidis' spiritual guide, contacted Saleh Muslim, then leader of the YPG's political wing, the Democratic Union Party (PYD), and asked him to intervene.

"There weren't many options. The lives of tens of thousands were at stake. The formation of that front was inevitable and invaluable," a senior Iraqi official involved in Sinjar told MEE.

"I do not think that Maliki or Baba al-Sheikh thought about what would happen next. The situation was tragic and pressing. There was no way to save these people without the help of the PKK."

What happened later, the official said, was a surprise.

"The forgotten town turned into a magnet: it attracted the largest number of intelligence services and armed groups in the region."

The PKK and YPG performed the required task. The families on the mountain were rescued with the help of western air power, and thousands of Sinjaris were evacuated through Syrian territory.

Muhandis and Soleimani did not forget to reward the Kurdish fighters. Dozens of PKK and YPG fighters were registered on the payrolls of the Hashd al-Shaabi, an Iraqi state-backed paramilitary umbrella group that was formed to fight IS.

To make this arrangement concrete, the fighters were registered as a Yazidi armed faction called the Sinjar Protection Units (YPS), a senior Hashd al-Shaabi commander told MEE. The real number of YPS fighters is not known, but the commander said about 90 Yazidi men have been on the payroll since 2015.

Meanwhile, the PKK and YPG have refused to leave Sinjar and have maintained some presence in the area since its liberation from IS.

The PKK and YPG see Sinjar "as an area they won, not an area they helped to liberate," the Iraqi official involved in minorities told MEE.

Meanwhile, Muhandis, who was then the deputy head of the Hashd al-Shaabi and had absolute power over financing and equipping the armed factions and volunteers who fought IS, wanted to secure his and his Iranian allies' foothold in the area.

Aware of the geographical, ethnic and religious specificity of the region, "he sought to reassure the Yazidis and gain their trust" by recruiting hundreds of them and forming around six armed factions, all linked to the Hashd al-Shaabi, a source at the prime minister's office said.

He did the same with Sinjar's Sunnis, forming another couple of Sunni armed groups associated with the Hashd.

Today, Muhandis and Soleimani are dead, killed in a January 2020 US drone strike, but all these factions are still stationed in and around Sinjar. In addition, several prominent Shia armed factions, including Kataeb Hezbollah and Asaib Ahl al-Haq, have also been deployed between Sinjar and Tal Afar, to the town's east.

'In and around Sinjar there are about 20 local and regional armed factions. Iran controls half of them and has strategic alliances with the other half'

Despite the differences in ideology, goals and affiliations, the relationship between the PKK and its associates on one hand and the Iranian-backed factions under the Hashd on the other is a symbiotic one.

The Hashd al-Shaabi provides financial support, government cover and havens for the PKK and its Syrian affiliates, while the PKK and its allies secure the Syrian borderlands and smuggling routes, and keep pressure on Turkey and the Kurdistan Democratic Party (KDP), the dominant party in Iraqi Kurdistan, Iraqi and US officials and international observers working in the area told MEE.

"In and around Sinjar there are about 20 local and regional armed factions. Iran controls half of them and has strategic alliances with the other half," a senior Iraqi official told MEE.

"Muhandis was very interested in this area. We did not know why at the time."

According to Iraqi and US sources, Iran has plans to export gas to Europe through Lebanese and Syrian ports if and when sanctions are lifted.

Strategically placed, Sinjar is already an important smuggling and supply area, and sources said passage of a gas pipeline to Syria's Mediterranean seaport of Baniyas would run through the town's environs.

One player in northern Iraq that cannot be ignored is the KDP. The leading power in the Kurdistan Regional Government, the KDP is a longstanding partner of Turkey, and its peshmerga security forces are deployed on the strategic mountains near the Syrian and Turkish borders.

Like the Hashd, the KDP has formed two Yazidi armed factions, which it has deployed to Sinjar alongside some peshmerga.

In September 2017, the KDP attempted to secede Kurdistan from Iraq through a referendum, prompting federal forces backed by the Hashd al-Shaabi to launch a massive military campaign to regain disputed areas.

The KDP withdrew from all the disputed areas, including Sinjar.

Thanks to the alliance that Muhandis established between the PKK and Iranian-backed Iraqi armed factions hostile to Turkey, the balance of power in Sinjar has tilted in favour of Iran.

Yet attempts were made to rid Sinjar of all armed factions. In October 2020, Baghdad signed the "Sinjar Agreement" with Erbil, ordering the withdrawal of all armed factions from the area, the expulsion of fighters belonging to the PKK and its affiliates, and returning Sinjar to KDP administration. The agreement went down dreadfully with the Iranian-backed factions, which, led by Kataeb Hezbollah and Asaib Ahl al-Haq, simply refused to leave, accusing Prime Minister Mustafa al-Kadhimi's government of handing the KDP the keys to Sinjar.

Since then, Turkish military operations targeting the PKK and its affiliates in Sinjar, especially the YPS, have intensified.

The inability of the Iraqi government to stop the mutual attacks, and the failure of the United States to intervene in favour of any party, has contributed to the complexity of the scene and left everyone in the region at the mercy of the conflicting parties.

"Regardless of the details, the conflict in Sinjar is Turkish-Iranian. If Iran and Turkey agree on areas of influence, the situation in Sinjar will be stabilised," Elie Abouaoun, analyst at the US Institution of Peace, told MEE.

"Turkey is currently in a better situation and is seeking to exploit the positive developments in its regional and western relations to push back Iran a little in Sinjar, while Iran is trying to preserve its gains."

With the international community distracted by events in Ukraine and elsewhere, Abouaoun predicted no major concessions or settlements in Sinjar, but also that "any attempt to open new fronts will be met with repulsion".

"So, it is not expected that things will get out of control or go beyond attempts to push and push back between the Turks and the Iranians in Sinjar." 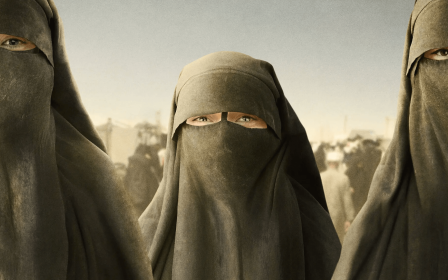 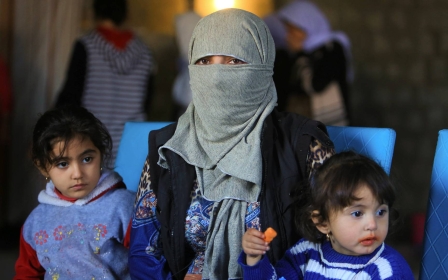