More than 1,000 migrants have died or disappeared at sea in 2018, according to UN figures (AFP)
By
MEE and agencies

More than 230 migrants remained stranded on a rescue boat in the Mediterranean Sea on Tuesday, as both Italy and Malta have refused to take them in amid a deepening row over migration in Europe.

A French government spokesman said on Tuesday that Malta may allow the German rescue ship Lifeline, which picked up 234 people off the coast of Libya on Thursday, to dock on its shores.

Italian Prime Minister Giuseppe Conte said on Tuesday that the Lifeline would go to Malta while Italy would take in some of the hundreds of migrants on board.

"I just got off the phone with (Maltese) president (Joseph) Muscat: the NGO ship Lifeline will dock in Malta," said Conte in a statement.

The prime minister did not specify, however, when the vessel would be allowed to dock in Malta.

Sources close to the Maltese government told Reuters: “No final decision has been made yet but if the ship comes in, the understanding is that the migrants will be shared among EU countries.”

The Lifeline’s fate remains uncertain weeks after Italy and Malta refused to accept another rescue ship, the Aquarius, which was carrying over 600 migrants. After days waiting on board the ship, the migrants, including pregnant women and children, were finally allowed to land in Spain.

Salvini referred to rescued migrants as “human flesh” on social media, prompting NGO Mission Lifeline to hit back on Twitter.

Dear @matteosalvinimi, we have no meat on board, but humans. We cordially invite you to convince yourself that it is people we have saved from drowning. Come here, you are welcome! pic.twitter.com/vPhLV4M2jO

The debate over migration continues among EU member states. Arrivals to Europe dropped by nearly half between 2016 and 2017, according to UN figures, with 43,096 sea arrivals recorded in the Mediterranean thus far in 2018 compared to 172,301 in all 2017.

At least 1,063 migrants have died or are missing in the Mediterranean in the first half of 2018 alone.

The sharp drop in arrivals is seen as tied to tougher migration policies by European states, as the far of populist and far-right governments in some countries such as Italy has been fuelled by anti-immigrant discourse.

European leaders held an informal summit in Brussels on Sunday to discuss the issue, as French President Emmanuel Macron and German Chancellor Angela Merkel vowed to forge ahead with like-minded leaders on ways to reduce migrant flows and share responsibility for those who land on Europe's shores. 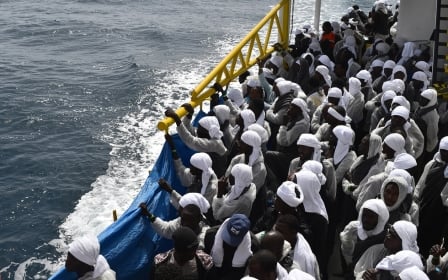