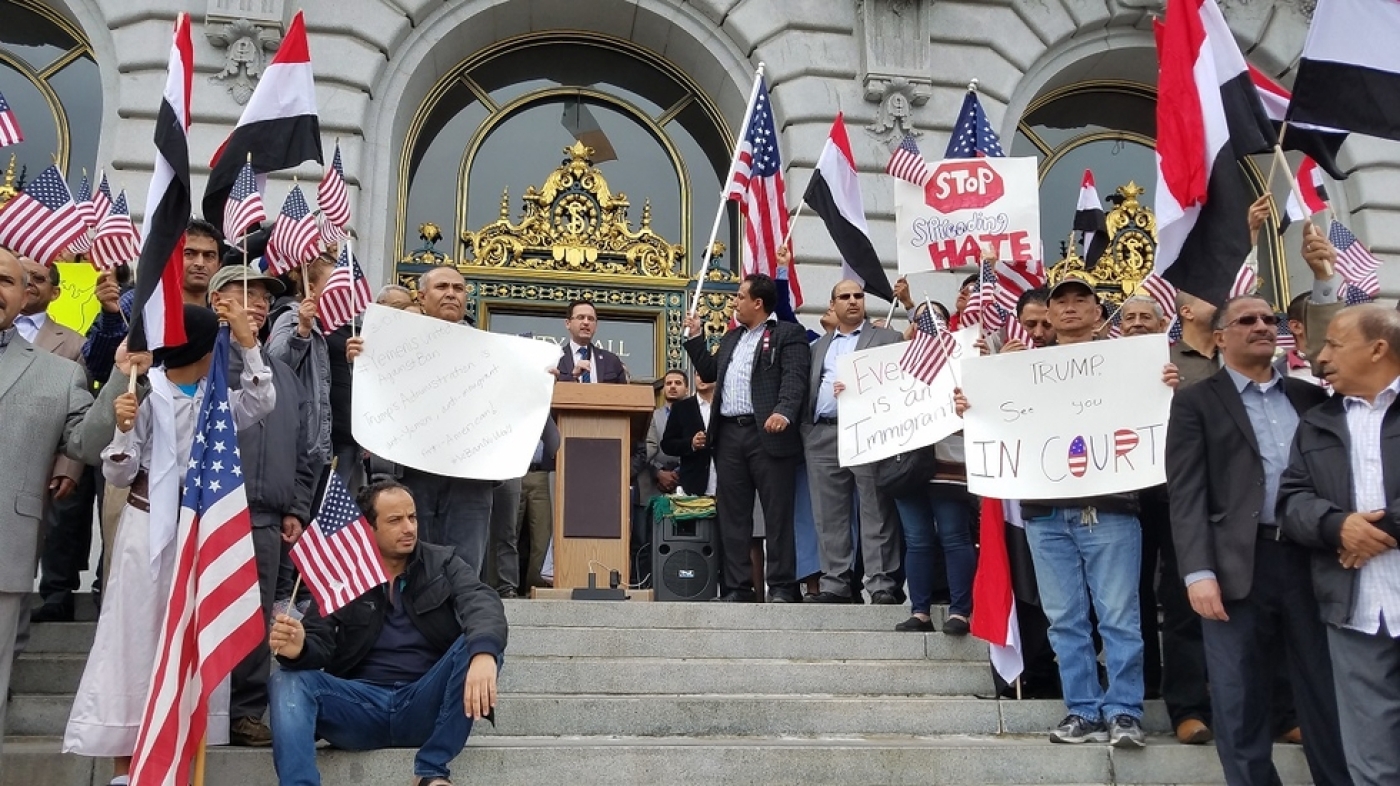 “Prophet Mohammed himself was an immigrant,” Dr Hatem Bazian, a local imam told a crowd of worshipers preparing for Friday prayers in front of San Francisco's City Hall, an event organized as part of their protest.

“If he had lived in this day and age, he wouldn't have been able to travel to this country, because of President Trump's Islamophobic policies,” Bazian said.

The congregation of more than 200 men nodded in agreement. Most of them have been affected directly or indirectly by Trump's previous ban and are expecting similar disastrous results with the recent one, slated to come into effect on Thursday.

“My father and other family members are still in Yemen and now I can't bring them here with me,” Ali Said, a US citizen born in Yemen, said after the prayer. “I have been living in this country for 17 years, but they won't allow me to bring my father. He's an old and frail man and needs me to take care of him. I also have two nieces who are trying to get a visa to escape the war, but now they may be stuck in Yemen.”

His friend Saleh expressed his surprise to find a country he believed to be democratic behaving in such a way towards immigrants.

“I came four years ago and I am a productive member of society here,” he said, while his friend Ali Said aided with translation. “I have been trying to bring my two sons from Sanaa, but now I have lost hope to reunite with them here, at least in the near future.”

Saleh said Trump’s approach does not aid in the fight against terrorism. “It just makes people angrier.”

Though the demonstrators were mostly Yemeni nationals or Yemeni Americans, other immigrant groups joined in the rally to show their support.

Olga Miranda, who represents a leading San Francisco union and immigration organisation, told demonstrators that the Latino community was behind “their Muslim brothers”, as part of the fight against Trump's policies.

“Whatever they do to you, they do to us, they are targeting all of us who are different,” Miranda said. “It's the time to stand up together and join forces with the rest of the immigrant communities and the minorities.”

People in New York, Detroit and Buffalo showed up to decry this latest xenophobic and Islamophobic attack

A federal court suspended the first ban after it was challenged by a lawsuit brought by the states of Washington and Minnesota. States and rights groups argued that the executive order was unconstitutional. Unlike the first order, issued on 27 January, the second version does allow entry to people with valid visas.

San Francisco's supervisor Ahsha Safai, who was born in Iran from an Iranian father and an American mother, said she understands the feelings many of those impacted by the ban.

“Well, if Trump had his way, I wouldn't be here talking to you right now, so I feel personally and deeply affected by this Muslim ban,” Safai said during a news conference held during the rally.

“A couple of weeks ago San Francisco showed the nation how to deal with this threat by passing an ordinance to protect immigrants and Muslim residents,” Safai told Middle East Eye during the rally.

Safai was referring to a rule that will allow residents to sue the city of San Francisco if their information appears on a federal registry, as a result of city officials sharing data with federal authorities.

The ordinance was in response to Trump's suggestion that his administration would begin a Muslim registry in the country.

“That's the kind of situation we have right now, we have to react even to the slightest threat because we see... that this man (Trump) does follow up on his threats,” Safai said.

According to the rally organizers, other protests taking place simultaneously were also gathering  large crowds, and not just Yemenis.

“People in New York, Detroit and Buffalo showed up to decry this latest xenophobic and Islamophobic attack,” Jehan Hakim, from the Asian-Americans Advancing Justice organization said.

The only reason my country of origin is not part of the ban, I'm sure of it, it's because of the oil.

She added that the Yemeni American community felt it was important to push back against the ban and found support by the broader society, saying: “This is not normal and we will not be silenced.”

Hakim, who is one of the nation-wide rally organizers, was happy with the solidarity that Yemeni Americans were shown before and during the rally.

“It was so last-minute, to tell you the truth. We couldn't just sit down and wait, and this is not going to be the last rally we do about the Muslim ban,” she said.

The activist sent a message to other communities that have been impacted by the executive order.

“We are calling on our allies, friends and other countries that are part of the travel ban to join us in our protest,” Hakim said.

One of the best ways to make an impact, at least on a local level, is to contact city and state officials to voice opposition to federal legislation, she said.

“We are pushing, we won't stop pushing on a local, state and federal level to make our voices, those of our constituents, heard,” Safai said. “And San Francisco and the Bay Area in general are against the Muslim ban and for sanctuary cities.”

Despite the government's claims that the ban does not target Muslims, it is a widespread belief, especially among Muslim residents, that that is exactly what Trump's administration is looking to achieve.

Less than a year before he was elected, Trump promised to enforce a complete ban on Muslims entering the United states.

“Of course it's trying to prevent Muslim people from entering the country, it would be silly to think otherwise,” Zahara Saber, a San Francisco resident, told MEE.

Although she was born and raised in Saudi Arabia, a country that is not part of the ban, she felt it was her religious duty to support other Muslims.

“The only reason my country of origin is not part of the ban, I'm sure of it, it's because of the oil. But regardless of nationality, he (Trump) can't do this to people just because he doesn't like their faith,” Saber said. Trump
'No Ban, No Wall': Growing solidarity among Latinos and Muslims