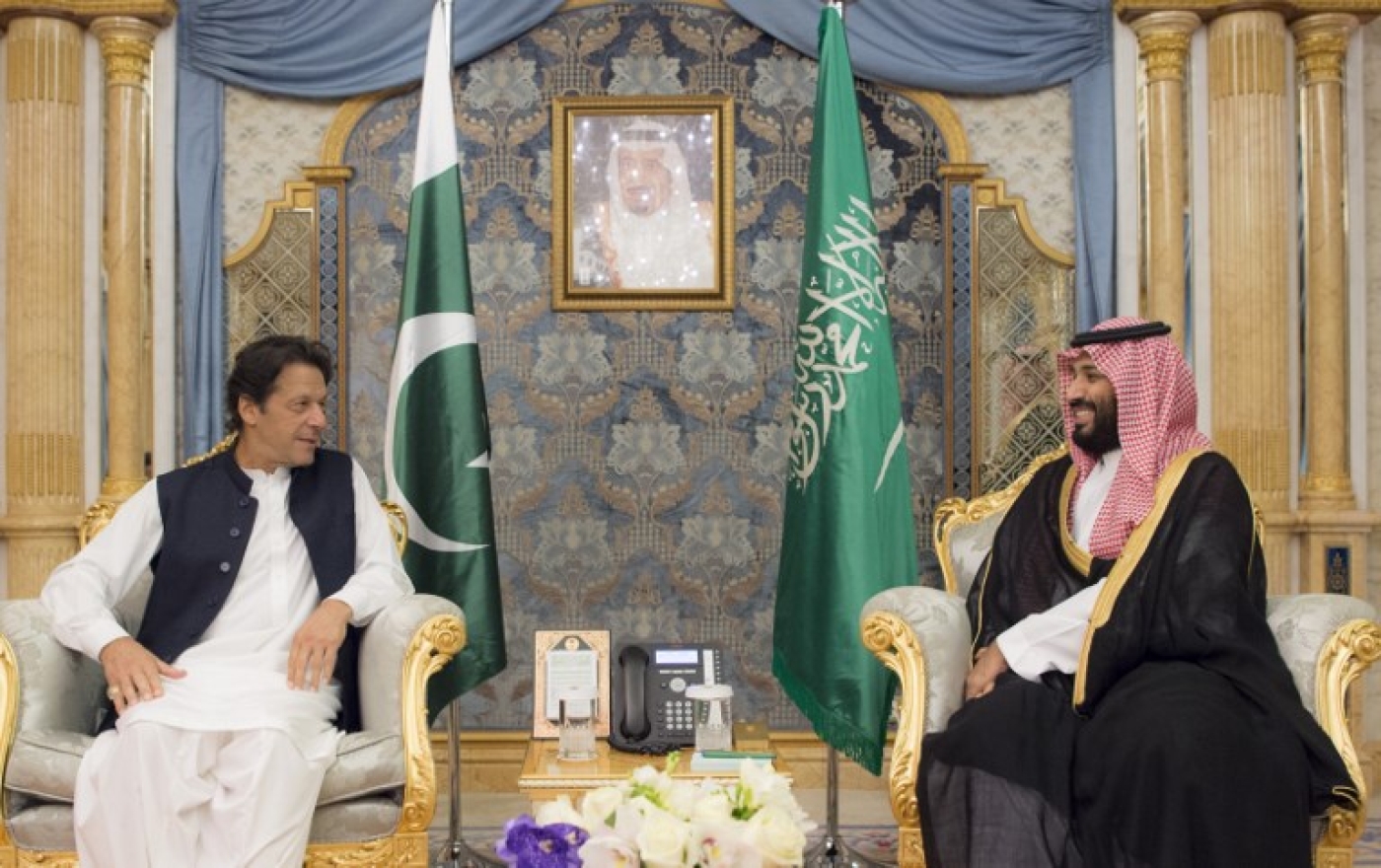 ISLAMABAD - Newly installed Pakistani Prime Minister Imran Khan has told Middle East Eye that his country must continue to prioritise good relations with Saudi Arabia despite the killing of Jamal Khashoggi because of its dire economic crisis.

Khan is due to travel to Riyadh on Tuesday to attend an investment summit that has been boycotted by many western officials and companies following the death of the journalist inside the Saudi consulate in Istanbul on 2 October.

And in his first interview with foreign journalists since taking office in August, Khan admitted that he could not afford not to attend.

Though shocked by Khashoggi’s killing, he said the Pakistani government needed urgent access to Saudi loans to avoid defaulting on record levels of debt within months.

But Khan called on the US to drop its sanctions against Iran, Saudi Arabia’s bitter regional rival, which he said had also been detrimental to the economy of neighbouring Pakistan.

'The last thing the Muslim world needs is another conflict. The Trump administration is moving towards one'

And he urged US President Donald Trump to stop seeking to provoke a conflict there, and suggested that his government could play a mediating role between Tehran and Riyadh.

“The last thing the Muslim world needs is another conflict. The Trump administration is moving towards one,” he said.

Khan also urged western and Arab governments to reopen their embassies in Damascus, now that pro-Syrian government forces have reclaimed most of the country after seven years of civil war.

Such a move would mark a remarkable reversal of policy by governments which closed their embassies in the early months of the war and called on President Bashar al-Assad to resign.

Pakistan has been one of the few countries which has kept its embassy open throughout the conflict.

Meanwhile, in neighbouring Afghanistan, Khan noted that the US had come round to accepting the need for talks with the Taliban, and suggested that one radical solution to the country’s problems could be a coalition government in which the Taliban shared power.

Khan concedes however that his immediate foreign policy priority is maintaining good relations with Saudi Arabia despite worldwide outrage at Khashoggi’s suspected murder by Saudi officials.

He described the journalist’s death as “sad beyond belief”, and indicated that he did not consider credible the latest official Saudi account of what happened.

Saudi Arabia said on Friday that Khashoggi had died in a fight with officials inside the building. Saudi officials had previously said that Khashoggi left the consulate soon after arriving.

“What happened in Turkey was just shocking. What should I say? It shocked all of us,” he said.

“The Saudi government will have to come up with an answer… We wait for whatever the Saudi explanation is. We hope there is an explanation that satisfies people and those responsible are punished.”

But Khan said he had no choice but to attend Saudi Crown Prince Mohammed bin Salman’s Future Investment Summit, which starts on Tuesday, because his country was so deep in debt.

“The reason I feel I have to avail myself of this opportunity [to speak to the Saudi leadership] is because in a country of 210 million people right now we have the worst debt crisis in our history," he told MEE, as he fidgeted with worry beads.

“Unless we get loans from friendly countries or the IMF [the International Monetary Fund] we actually won’t have in another two or three months enough foreign exchange to service our debts or to pay for our imports. So we’re desperate at the moment.”

Khan added that Pakistan would probably need loans from both friendly governments and the IMF to meet its commitments.

He was speaking in his privately-owned home perched on a hill in the village of Bani Gala high above Islamabad with a gorgeous view of farms and a distant lake.

Mediating role between Riyadh and Tehran

Khan’s trip to Riyadh is his second visit to Saudi Arabia in five weeks. Although he is yet to visit Tehran, the Pakistani Prime Minister hopes his government can play a mediating role in the worsening confrontation between Iran and Saudi Arabia.

“The best thing which could happen is us playing the role of bringing them together, somehow helping in alleviating and getting rid of this conflict,” he said.

He unambiguously blamed the US and Israel: “The US-Iran situation is disturbing for all of us in the Muslim world... The last thing the Muslim world wants is another conflict. The worrying part is that the Trump administration is moving towards some sort of conflict with Iran.

“From our point of view, Iran is a neighbour. We already have a problem with one neighbour, Afghanistan… This is a policy driven by Israel which is leading the US to a conflict with Iran,” he said.

He pointed out that Iran was staying faithful to the nuclear deal signed with the US, Russia, China, the UK, France and Germany,  but the Trump administration’s decision to repudiate it and impose sanctions on Iran directly affected Pakistan.

“Oil prices have already almost doubled in the last year and a half.  The impact it has on poor countries in terms of creating more poverty. So I hope that sanity prevails and this rhetoric doesn’t lead to conflict.”

Asked if he would like the US to drop its sanctions on Iran, he replied unhesitatingly: “Yes, I would.”

US sanctions had scuppered plans for a gas pipeline from Iran to Pakistan, and impeded trade and banking, he explained. He also worried over the risk that the confrontation between largely Sunni Saudi Arabia and largely Shia Iran could heighten sectarian tensions in Pakistan.

“Twenty percent of our population, almost 40 million people, are Shia. Pakistan has traditionally had very powerful, very close relations with Saudi Arabia. Not only because in times of need Saudi Arabia has helped us. There are also two million Pakistani workers in Saudi Arabia.  The country depends on their remittances,” he said.

Khan referred repeatedly to the fact that wars rarely go as smoothly as the planners want. He cited the US invasions of Iraq and Afghanistan, which the US expected to lead to quick success but turned into quagmires lasting for years.

During his visit to Riyadh in September he had made the same point to the Saudi leadership in connection with Yemen, he revealed.

“I have always opposed military solutions," he told MEE. “So when I went the first time to Saudi Arabia I gave my opinion that whenever military men tell you that it’s only a matter of weeks or months, whenever you start a war it has unintended consequences.”

Pakistan which has fought three major wars with India since independence in 1947 has a long history of military ties to Saudi Arabia. Its battle-experienced officers have been helping to train the Saudis for more than three decades.

When Mohammed bin Salman formed a coalition of Muslim states to intervene militarily in Yemen, he asked Pakistan to take part.

Nawaz Sharif,  Khan’s predecessor as prime minister, wanted to accept but the Pakistani parliament, where Khan was an opposition leader, voted overwhelmingly to refuse.

Senior generals were also against involvement, partly for fear that any support for the Saudi military against Yemen’s Houthi rebels, who are mainly Zaidis, a non-Sunni branch of Islam, could incite problems in the ranks of the non-sectarian Pakistani army.

Nevertheless there have been media reports that Pakistani trainers have been on the Yemeni border advising Saudi forces. In his MEE interview, Khan categorically denied this.

“It [our military] is not taking part in any action in Yemen. It is not involved in any conflict in Yemen,” he said.

'The people of Syria have lost'

On Syria he took a strong line, arguing that outside interference by foreign states to bring about regime change there had caused more problems and was wrong.

'Look at the suffering of the people. So yes, the answer is there should be peace there. Syria does not need more military action for regime change'

Asked if he thought Assad had won, he replied: “The people of Syria have lost. But I guess he [Assad] is in control now… Look at the suffering of the people. So yes, the answer is there should be peace there. Syria does not need more military action for regime change.”

Khan has long been a critic of US military involvement in Pakistan as well as the Middle East. After 9/11 and the collapse of the Taliban regime in Afghanistan he opposed the decision by General Pervez Musharraf (the country’s military ruler at the time) to send Pakistani troops to try to catch al-Qaeda fighters who had fled from Afghanistan to Pakistan’s autonomous tribal areas.

“General Musharraf got pressured by the Americans and did something which was probably the biggest blunder committed by a Pakistani leader,” he said.

“What happened in the tribal areas was almost a civil war with people standing up against our troops because of the collateral damage, and this ended in a full-fledged operation where half the people ended up being internally displaced.

“Almost three million people were displaced out of six million in the population. The whole area was devastated by the war in 10 or 12 years. It’s still not safe right now. We ended up losing almost 80,000 people dead. And that was under American pressure.”

He insisted that “what should never happen again is that Pakistan on anyone’s insistence including the Americans should ever send troops against our own people”.

He said that “for advocating a political settlement 10 years ago they call me Taliban Khan”. He welcomed the fact that the Americans had finally realised there was no military solution in Afghanistan and had started talks with the Taliban.

He said he wished Saturday’s parliamentary elections in Afghanistan had been delayed and some sort of power-sharing deal had been agreed with the Taliban. It should still happen, he believes.

Khan acknowledged his line of thinking used to be considered anti-American. But he claimed that now that the US accepted there was no military solution in Afghanistan Pakistan’s relations with the US would be better than at any time in the last 10 years.

If his prediction is borne out, it will be an extraordinary turnaround. In January 2018, Trump tweeted: “The United States has foolishly given Pakistan more than $33 billion in aid over the last 15 years, and they have given us nothing but lies and deceit.”

In reaction Khan, at that stage an opposition MP, called Trump “ignorant and ungrateful”.

In his MEE interview, Khan was more diplomatic. A former captain of Pakistan’s national cricket team, he used a cricketing metaphor about a batsman who does not engage with a wide ball but lets it go past him to the wicket-keeper.

Asked what he thought of Trump, he said: “If I wasn’t the Prime minister, I would have given my views. Being the Prime Minister I have much more responsibility, so I’ll just say as we say in cricket, ‘well left’.” 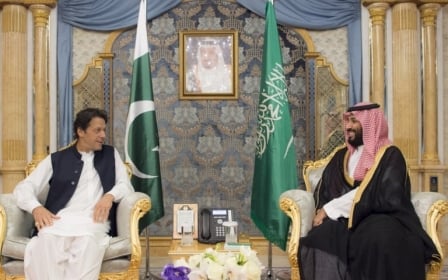