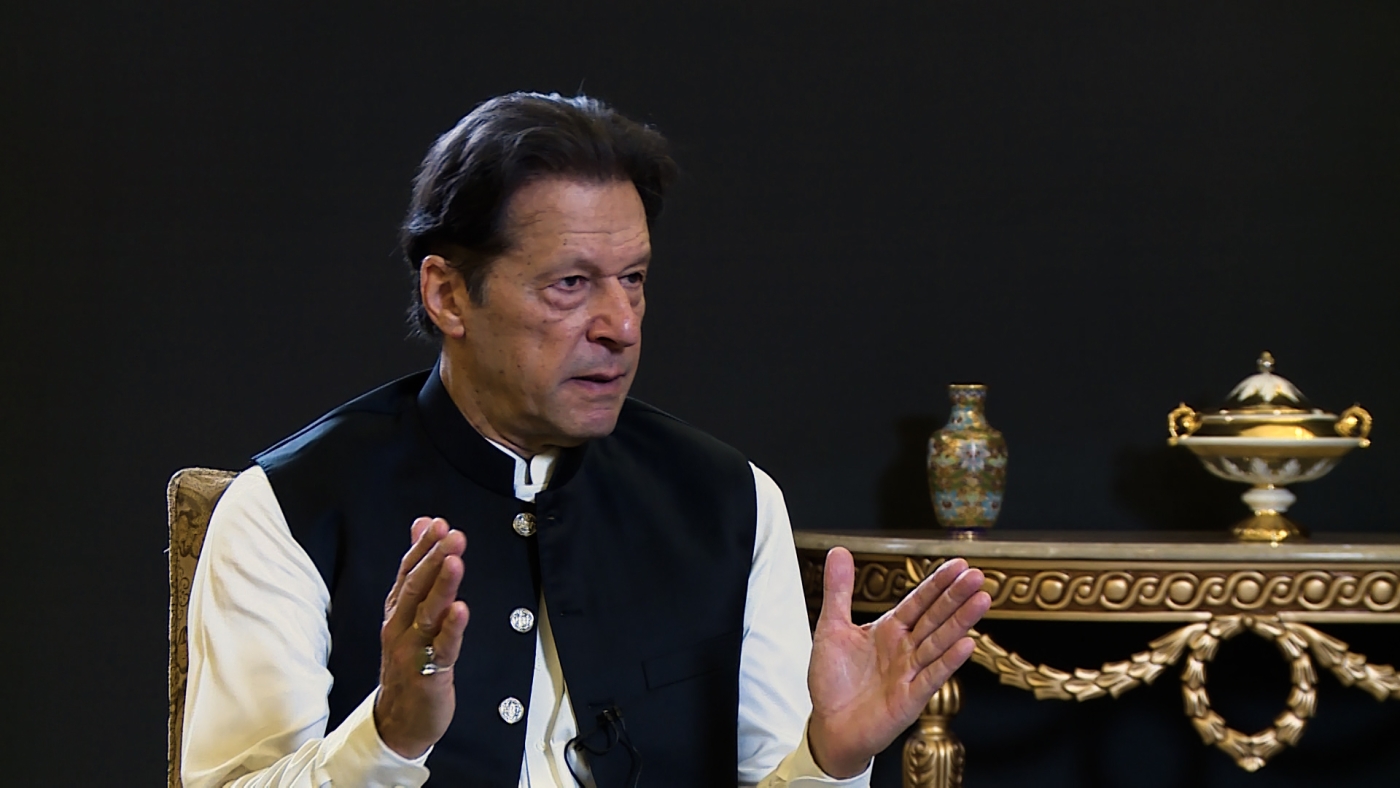 Imran Khan: 'No one should be allowed to cause pain to human communities' (MEE)
By
Peter Oborne
, David Hearst

Ten years ago Imran Khan, an international cricket star but at the time only an outfielder in politics, wrote this about the United States-led “war on terror” in his book Pakistan: A Personal History.

“The first phone call after 9/11 I received was from the ITN’s Martin Bashir. ‘As a Muslim, aren’t you embarrassed by the attacks?’ was his immediate question. I was shocked, then realised what others would be thinking too.

“Implying all the world’s 1.3bn Muslims should feel in some way responsible for an act of a handful of criminals is a bit like asking a Christian to feel responsible for Hitler,” Khan wrote.

With a personal history which straddled East and West, Khan expected a backlash after 9/11 but had not anticipated its ferocity.

He wrote: “The campaign to instil fear among Western populations about the threat from what has at times been hysterically referred to as islamofascism has given way to rising Islamophobia.

“The ascent of rightwing, anti-immigration parties in Europe, the misleading and sometimes downright sensationalist reporting against Muslims in the rightwing Western media, France’s ban on the burka, Switzerland’s ban on minarets and the furore over the Muslim community centre near New York’s ground zero have helped the radical’s cause and alienated ordinary Muslims.” 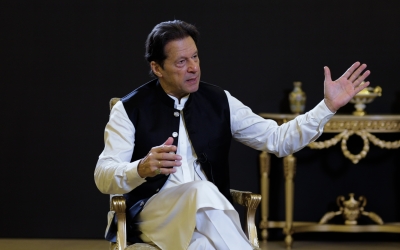 Imran Khan: US must engage with Taliban or face chaos
Read More »

Today Prime Minister Khan, surrounded by aides nervously eyeing the clock, feels sadly vindicated. The list of western missteps has only lengthened in the ensuing decade as has the mutual incomprehension.

When Khan was a student at the University of Oxford in the 1970s, Britain’s South Asian communities - which had put down roots in the 1950s and 1960s as immigrants from India and Pakistan, and had arrived in the UK in response to post-war labour shortages - were targeted by far-right skinheads.

Now, according to Khan, heads of state are stoking the same prejudices.

French President Emmanuel Macron’s deployment of anti-Muslim rhetoric and policies in his fight with the extreme right for re-election continues to rile Khan.

“Does he not understand that his statements and actions only power the vicious cycle of violence in France?” Khan said in an interview with Middle East Eye in Islamabad.

“I feel that President Macron does not really understand how he is going to deal with the Muslim community if he does not understand this vicious cycle.

“Someone on the fringes will insult the Prophet. There will be a reaction, a stabbing. This will outrage French society… saying freedom of expression is our religion. Police will clamp down on the mosques. Muslims will be marginalised and someone from those ranks will strike again.”

France has been the target of a series of deadly Islamist militant attacks in recent years.

In January 2015, 12 people were killed in an attack on the offices of Charlie Hebdo, a satirical magazine which in 2012 had published cartoons depicting the Prophet Muhammad. The attack was claimed by Al-Qaeda in the Arabian Peninsula.

In November 2015, Islamic State gunmen and bombers killed 130 people in Paris. In July 2016, 86 people were killed when an IS-inspired attacker drove a truck into a crowd celebrating Bastille Day in Nice.

A year ago this week, Samuel Paty, a teacher in a Paris suburb, was killed and beheaded after showing Charlie Hebdo’s cartoons of the Prophet to his class. 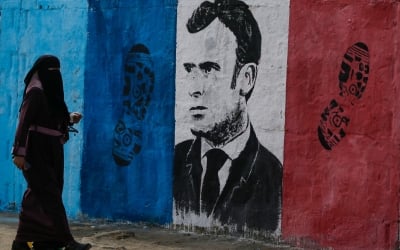 In the aftermath of Paty’s murder, the cartoons were beamed onto the sides of public buildings in support of the principle of free speech.

French interior minister Gerald Darmanin ordered the closure of the Grand Mosque de Pantin after it had shared a video critical of the teacher on its Facebook page in the days before the attack. He has since also closed two Islamic charities.

Macron said: “Our compatriot was killed for teaching children freedom of speech.”

Since then, Khan and his government have been conducting a public argument with Macron. When the French president said that Paty was killed “because Islamists want our future”, Khan said in a series of tweets that these remarks would only sow division.

"This is a time when Pres Macron could have put healing touch & denied space to extremists rather than creating further polarisation & marginalisation that inevitably leads to radicalisation," Khan wrote.

It is unfortunate that he has chosen to encourage Islamophobia by attacking Islam rather than the terrorists who carry out violence, be it Muslims, White Supremacists or Nazi ideologists. Sadly, President Macron has chosen to deliberately provoke Muslims, incl his own citizens,

He continued: "It is unfortunate that he has chosen to encourage Islamophobia by attacking Islam rather than the terrorists who carry out violence, be it Muslims, White Supremacists or Nazi ideologists."

How is this going to end?

Khan sees two scenarios: either France finds a way of living with the biggest Muslim community in western Europe - a “code of existence” is how he describes it - or it will continue to alienate and exclude its Muslim citizens from public life.

Western society refuses to understand the hurt caused to millions of Muslims when the Prophet is insulted, Khan says.

“They cannot understand the reverence we have for the Holy Prophet, peace be upon him. People love him, more than anything, respect and love for him is paramount in our religion.”

At the heart of this dispute between two national leaders is profound disagreement about the nature of free speech. For Macron and his many supporters, free speech is a fundamental freedom which is a core republican value. 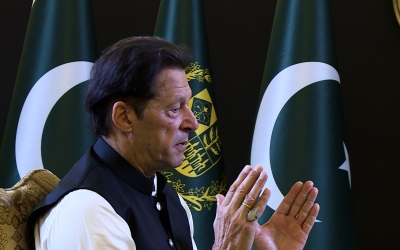 In contrast, Khan believes that the right to free speech should not override community cohesion and the need to protect communal relationships.

As an example, he defends Pakistan’s bitterly criticised blasphemy law on the grounds that it has protected religious communities.

“The blasphemy law was made by the British when they were ruling India. What was the blasphemy law? Three different human communities living in a village. Someone would insult a sacred entity of the other community. There would be a riot. People would be killed. So they then said this is not allowed. So instead of there being a riot, they would go to the police saying the law has been insulted.”

Khan defends legislation against hate speech, including laws in 16 European countries and Israel against Holocaust denial.

But Khan presses this point: just as western society recognises that Holocaust denial caused “a lot of pain to the Jewish community”, so it should also recognise the pain caused to Muslims by orchestrated insults of the Prophet Muhammad.

“No one should be allowed to cause pain to human communities. If we have to live in a global village, therefore we Muslims must make every human community define what gives them pain. This [insulting the Prophet] is what gives us pain.”

But for Khan it is not just the West that has failed. Muslim leaders kowtowing to the wave of alienation have failed too.

They too, he said, have allowed the West to conflate Islam and terrorism.

He said that just as it was wrong to blame India for a deadly variant of Covid, terrorism should not be associated with any religion.

But why, then, is Khan so silent about China’s well-documented mistreatment of another Muslim minority, the Uighurs?

Khan talks warmly of China, describing its relationship with Pakistan as one that has “stood the test of time”.

“We have spoken to China. The Chinese are given an explanation. Our relationship is such that we have an understanding between us, we will talk to each other, but behind door because that’s the nature of the culture. We do not talk about it in public,” says Khan.

By contrast, his argument with Macron is very public indeed.

Khan fires back that western outrage about the Uighurs is selective.

“Why is there not so much indignation about what is happening in Kashmir by the same countries that want us to talk about the Uighurs?” he asks.

“The whole Muslim world is in turmoil. From Syria to Yemen, the Muslims are dying. We as a government decided that our main focus right now should be a disputed territory between Pakistan and India, where all these human rights violations are taking place. Let the world take notice of that first. Then we'll talk about other violations of human rights."

This is the reply of a man representing the government of Pakistan. He may have answered differently 10 years ago. 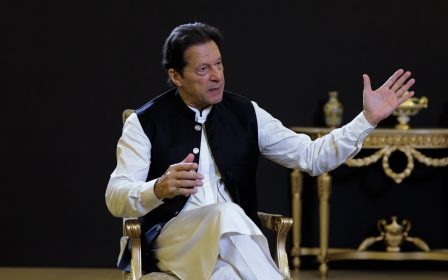 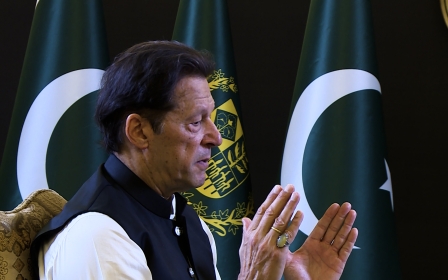 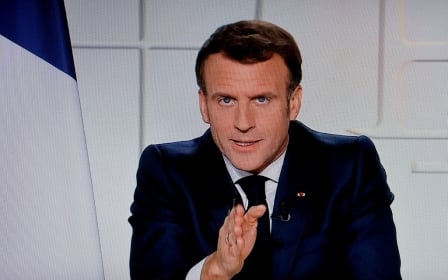