Iranian politicians and media have condemned Rafael Grossi, head of the IAEA, for calling for a new agreement over Iran's nuclear programme (Reuters)
By
MEE correspondent

Both reformists and conservatives in Iran have accused Rafael Grossi, head of the International Atomic Energy Agency (IAEA), of double standards over remarks he made about the need for a new agreement covering Iran's nuclear programme.

On 17 December, Grossi said that to return the United States to the 2015 nuclear deal, also known as the Joint Comprehensive Plan of Action (JCPOA), President-elect Joe Biden would require reaching a new agreement with Iran, given the changed circumstances since it was reached.

Politicians and media from across the political spectrum in Iran condemned Grossi's remarks, saying that he had turned a blind eye to the US unilateral withdrawal from the deal in 2018 and the European powers' (the UK, France and Germany) inaction after the US had left the agreement.

The reformist Etemad daily, under the headline "The indebted beneficiaries," accused Grossi of damaging the IAEA's independent stance in Iran's 2015 nuclear deal by putting his weight behind the European parties of the nuclear deal.

According to Iran's nuclear accord, the IAEA is in charge of policing the 2015 deal between Tehran and world powers.

"Iran will return to full compliance according to the nuclear deal if all sanctions that the US imposed on Iran since 2018 are lifted," wrote the daily.

"This is neither avarice nor the demand of one political faction. This is what the international society owes to the 80 million citizens of a country that adhered to its commitments to the deal one year after the US withdrawal from the accord," the daily added.

The conservative Khorasan daily, which represents one of the main anti-JCPOA factions in Iran, also criticised Grossi's remarks, suggesting that it was beyond his remit to call for a new agreement.

"Over 31 months passed from the time that the US unilaterally left the accord, and during this time the EU had done nothing regarding its commitments," the daily wrote.

"Now it seems that the place of the debtors and the beneficiaries [in the accord] have changed, and that Grossi is suffering from Alzheimer's," the Khorasan added.

According to JCPOA, Iran agreed to limit its nuclear programme in return for the lifting of international economic sanctions.

However, in May 2018, Washington unilaterally abandoned the accord and imposed heavy sanctions on Iran's economy.

Iran remained committed to the JCPOA until 2019, hoping that the remaining parties to the accord would find a way to bypass US sanctions and continue economic relations with Iran.

However, following the EU, Russia and China's inability to counter the US's heavy-handed sanctions, Iran began reducing its commitments to the deal and returned to its nuclear programme.

Grand Ayatollah Ali al-Sistani's office has rejected reports on Sistani's possible role in the arrest or trial of Iranian journalist Ruhollah Zam, who was hanged in Tehran on 12 December.

Following Zam's 2019 arrest in Iraq, various Farsi media reported that he had travelled from France, where he lived in exile, to Iraq to interview Sistani.

BBC Persian, in a documentary, claimed that the intelligence branch of the Islamic Revolutionary Guard Corps (IRGC) had lured Zam and encouraged him to go to Iraq, where Iranian intelligence services have a heavy presence. According to BBC Persian, Zam was told that a sponsor with ties to Sistani was interested in running a new Farsi TV channel, but only if the channel was inaugurated with an interview with Sistani.

Sistani's office rejected these reports, saying that his office had questioned Iranian officials about the potential abuses of Sistani's name by Iran's intelligence services.

"[Iranian officials] have strongly rebuffed any abuse of Mr Sistani's name in the process of Zam's arrest," read a statement issued by the office in the Iraqi city of Najaf.

BBC Persian suggested that the IRGC might have hacked Sistani's website and used his office's email address to trap Zam.

Meanwhile, Zam's lawyer, Hassan Fereshtyan, who also lives in France, confirmed that his client travelled to Iraq because he was told that he could meet Sistani and have an interview with him.

"When he told me about his plan to meet Ayatollah Sistani and to establish a TV channel with his support, I told him 'you really want to go to Iraq? You will be dead'," Fereshtyan wrote in an article for Melliun Iran news website.

Conservative politicians have accused President Hassan Rouhani's administration, as well as pro-reformist dailies, of intentionally distorting the Iranian supreme leader's remarks about the need to lift US sanctions.

Last week, Ayatollah Khamenei had advised Iranian officials not to "even waste an hour" to try to have the US sanctions lifted. His remarks were first published in Farsi and English on Khamenei's official website and then widely published on the front pages of reformist and moderate dailies. 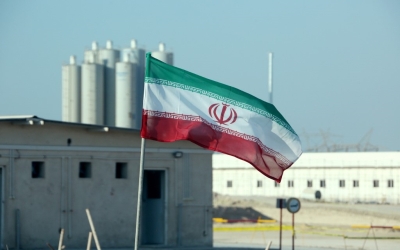 "In an organised move, that has no meaning other than complaisance to those who imposed sanctions on Iran, [reformist dailies] have systematically distorted the remarks by the Islamic revolution's leader," the Kayhan newspaper wrote on Saturday.

The Javan daily, funded by the IRGC, has also suggested that by distorting Khamenei's remarks, the reformists attempted to justify their desire to hold talks with US President-elect Jo Biden's foreign policy team.

Conservatives politicians and the IRGC are the main opponents of any negotiations between the new US government and Rouhani's administration.

In February's election, the powerful Guardian Council banned many reformist candidates from running. Experts predict that the same strategy will be used in the upcoming elections.