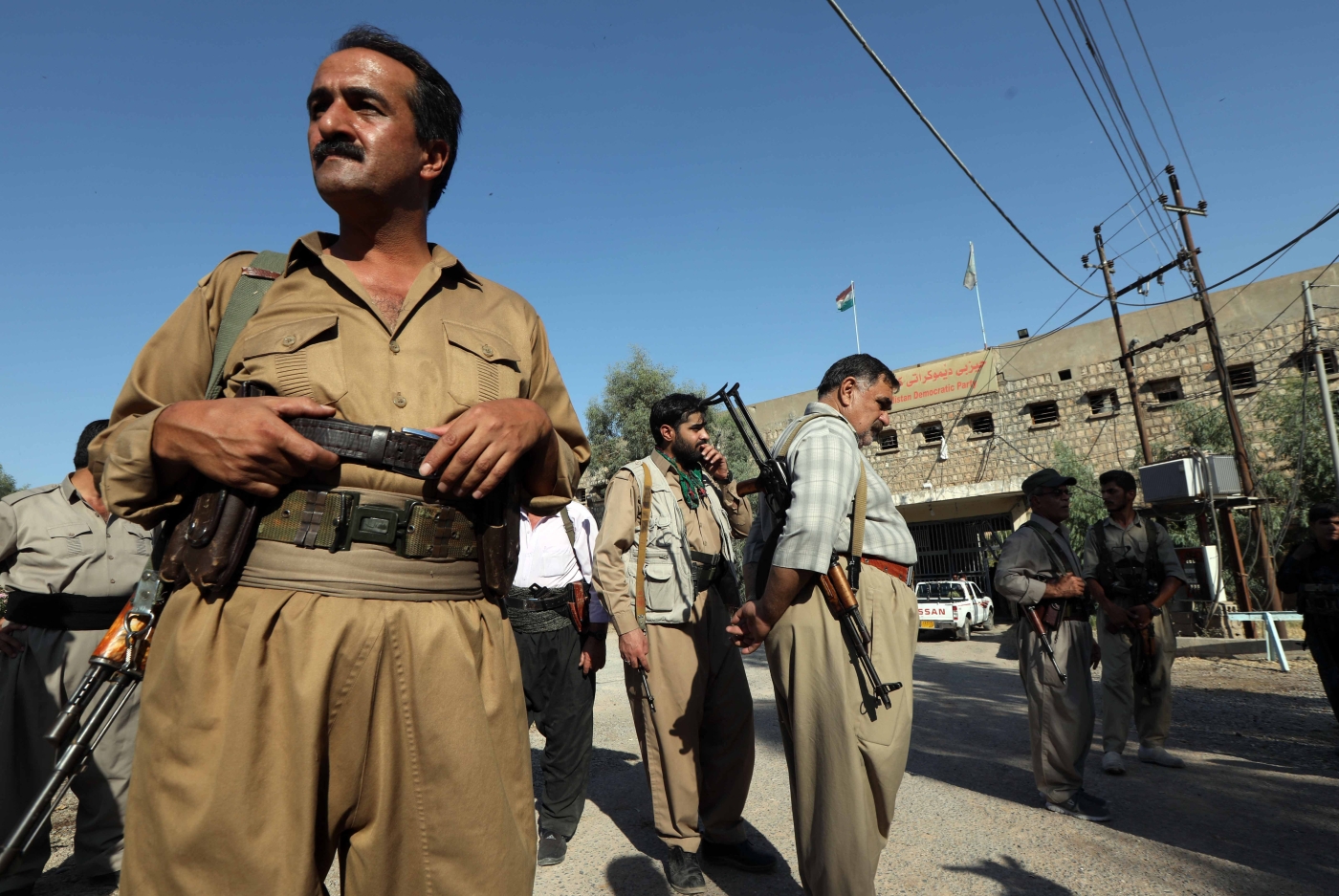 Iranian Kurdish members of the Iranian Kurdistan Democratic Party (KDPI) stand by their headquarters after a rocket attack in Koysinjaq, 100km east of Erbil on 8 September 2018 (AFP)
By
MEE and agencies

Iranian jets and drones have carried out attacks on members of an Iranian Kurdish separatist party based in northern Iraq, the group said on Thursday.

An official from the Kurdistan Democratic Party of Iran (KDPI), a group seeking autonomy for Kurds in Iran, said there were no casualties from the strikes, which targeted the Sidakan and Choman areas of Erbil province on Thursday morning.

“We have recovered the remains of a drone that was used in the attack on one target and we have photos,” Kawa Bahrami, a KDPI military commander, told Rudaw, a media network based in Iraqi Kurdistan.

Bahrami said that “six Iranian drones" had attacked the KDPI's peshmerga, a term that refers to the armed wing of Kurdish groups.

Choman mayor Swara Akram also confirmed the attack to Rudaw, adding that there had been no casualities in the area, which is managed by the autonomous Kurdistan Regional Government (KRG).

A number of armed Iranian Kurdish organisations, including the KDPI, are based in northern Iraq. The KDPI is politically linked to the KRG's ruling Kurdistan Democracy Party (KDP), the Kurdistan Freedom Party (PAK) and the Party of Free Life in Kurdistan (PJAK), itself an offshoot of the Kurdistan Workers' Party (PKK).

Last month, the KDPI accused Iran of killing one of its officials in Iraq.

Mussa Babakhani, a member of the central committee, was "assassinated by a terrorist affiliated" with Iran, a statement from the party said.

Tehran refers to the KDPI, which is based in Iraq's autonomous Kurdistan region, as a "terrorist" group.

The KDPI has accused Iran of murdering several of its leaders in recent years. It said Babakhani, born in 1981, joined the party in 1999. The group was banned after Iran's 1979 Islamic revolution.

In September 2018, an Iranian missile strike on the KDPI headquarters in Iraq's Kurdish region killed 15 people.

Kurds, a non-Arab ethnic group, have long agitated for their own state in the region. They number between 25 million and 40 million people and are spread across Turkey, Syria, Iraq and Iran.

In Iran, they make up around 10 percent of the population.

Tehran has warned the authorities in KRG not to allow "terrorist groups" to set up camps near the border.