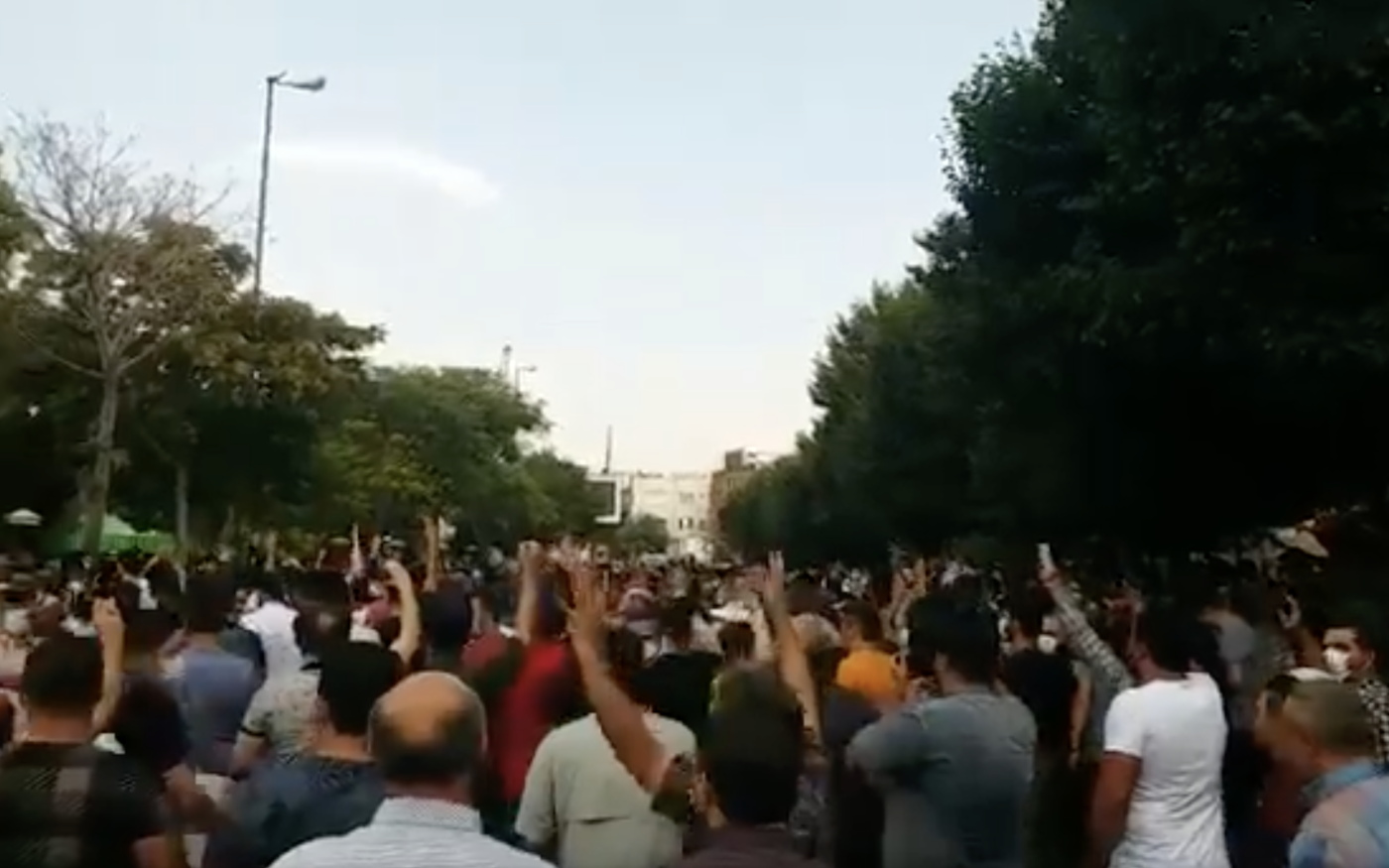 Iranians in northwestern Tabriz hold a rally in solidarity with Khuzestan, far to the south (Twitter)
By
MEE correspondent
in
Khuzestan, Iran

Ali*, a 21-year-old unemployed man, can no longer find work in his province, Khuzestan, even as a farmworker. He says the water shortages have destroyed the agriculture sector in Iran's oil-rich southwestern province.

'Why do we have to face water shortages in the province where the Karun River is full of water?'

"We are sick and tired of this situation. Why do we have to face water shortages in the province where the Karun River is full of water?” Ali told Middle East Eye as he contemplated a bleak future in a province where residents have long complained of marginalisation.

"What should I do as a young person? Where can I get a job? How do I make a living? We are stifled by so many problems. Why doesn't anyone pay attention to us?"

Ali, who lives in a village in Ahvaz County, is one of too many people suffering as a result of the water crisis in Khuzestan.

For a week now, the province has been in the spotlight in Iran. On the evening of 15 July, people took to the streets in a number of cities in the province, including Ahvaz, Abadan, Hamidiyeh and Shadegan, Khorramshahr and Mahshahr, to protest against the lack of water and frequent power outages.

The protesters chanted slogans such as "The river is thirsty,"  "I am thirsty," and "We give our lives and blood to the Karun," while some burned trash cans and tyres in a sign of growing anger over years of neglect despite repeated warnings that the province has been at risk of water shortages. 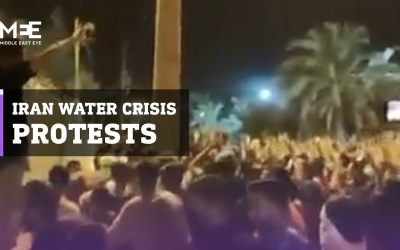 In June 2020,  people in different parts of the province protested against the lack of water for daily consumption and agricultural purposes, but their demonstrations were violently suppressed. Security forces using pellet guns wounded a number of demonstrators and several others were arrested.

Although the authorities at the time said they would solve the problem of water supplies to Khuzestan's villages, their promises have yet to be fulfilled.

"People in Tehran would not be able to withstand life in Khuzestan for even a week. The temperature is 50 degrees Celsius, coupled with high humidity, and we have no water," Ahmad*, a 19-year-old who lives in Mahshahr city, told MEE.

"Ever since we could remember, we have never had drinking water, and we have always had to buy water bottles. The people in cities are better off. Water is delivered in tankers to people in villages."

Qassem Soleimani Dashtaki, the provincial governor, confirmed after the protests escalated on 21 July that water has been delivered to 702 villages in Khuzestan in tankers.

However, the move far from resolves the deeply rooted problem facing the population in the province. Excessive use of groundwater resources, pollution from oil production, water transfers from the Karun and other rivers in Khuzestan to other provinces, and development projects have caused environmental damage and widespread water shortages.

In an interview on 19 July, Hadi Savari, a former member of the Ahwaz City Council, blamed improper dam construction in the province as the main reason for the water crisis.

"Khuzestan has four important rivers, Karun, Dez, Jarahi and Zohreh, and two large wetlands, Shadegan and Hur al-Azim, which have always been full of water throughout history," Savari said. "One-third of Hur al-Azim is located on Iranian territory and has been destroyed due to road construction and its division into five basins for oil exploration, as well as the closure of water inlets to Iran by the Iraqi government."

The speed of the protests' spillover to other provinces is unprecedented. The demonstrations, which quickly spread to almost all cities of Khuzestan, were taken up in cities further afield, such Kermanshah, Isfahan, and in parts of Lorestan province and Tehran. In response, security forces stepped in to confront and end the unrest.

Photos posted on social media showed the deployment to Khuzestan of police forces from Tehran. Social media activists also posted images of armoured and riot vehicles being unloaded off a plane at Ahwaz Airport in Khuzestan.

Several pictures circulating on Twitter show tanks, armoured water cannon trucks and other anti-riot equipment vehicles on the roads in the province.

Meanwhile, authorities have shut down the internet in most parts of Khuzestan in a bid to curb the protests. NetBlocks Internet Observatory reported on 22 July that data confirmed serious disruption to cellular networks in the province beginning on Thursday 15 July.

The strength of the crackdown on protests was quickly condemned.

"They have really no shame," said Naeem*, a 20-year-old from Izeh who had witnessed the mobilisation of anti-riot forces. "They shot at people indiscriminately, while our demonstration was completely peaceful. We were unarmed. We did not have guns.

"Why are they shooting at us? We were not even carrying rocks and sticks. We just chanted that we wanted water."

'Why are they shooting at us? We were not even carrying rocks and sticks. We just chanted that we wanted water'

- Naeem, after protests in Izeh

Izeh, a city of 200,000 people, joined the protest movement after demonstrations spread to small towns.

The slogans chanted in the city have been more radical than in other areas in the province, which might explain why the crackdown in Izeh was harsher than in other cities.

Protesters spoke out against the Iranian establishment, with chants that included "Death to the Islamic Republic" and "Death to Khamenei," Iran's supreme leader.

On 23 July, Amnesty International announced that security forces had killed at least eight protesters in the province.

Meanwhile, Iranian state media claimed that demonsrators were killed not by security forces, but by rioters and separatists in an attempt to hijack the protests.

It took more than a week for Supreme Leader Ayatollah Ali Khamenei to react to the unrest in Khuzestan. In a speech on 23 July, he described people's grievances as valid and blamed the crisis on authorities.

"No one can complain about these people. If the problems in the field of water and sewage in Khuzestan province had been solved by now, we would not be witnessing such problems today," he said.

'During eight years of war with Iraq, this province was destroyed, and now, our own soldiers are killing us and shedding our blood'

"The people expressed their displeasure because they are frustrated. This is not a small problem, especially in Khuzestan's hot climate.

"I call on the authorities to quickly solve the problems of the province's people who are really loyal."

Khamenei's remarks come despite the fact that the security forces responsible for the clampdown on protesters in Khuzestan act under his command or under the command of agencies appointed directly by him.

Such statements are unlikely to pacify people's anger, although a continued crackdown could end the protests, even if temporarily.

"They are all talk. They just say people have rights, where are these rights? Is a bullet our right? Or shedding our blood? Is it an excessive demand to ask for water? They have no shame,” says Adel*, a 24-year-old from Dezful.

"During eight years of war with Iraq, this province was destroyed, and now, our own soldiers are killing us and shedding our blood. They also curbed access to the internet so that no one can hear us getting killed." 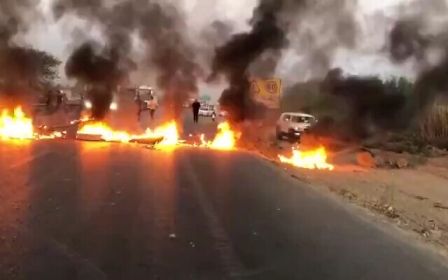