Iran warns it is ready to respond to any threat to its security after UK, US and Israel blame Tehran for oil tanker attack British Prime Minister Boris Johnson said Iran must "face up to the consequences" of an attack on an Israeli-managed tanker in Omani waters that resulted in the deaths of two people, including a UK national.

"Iran should face up to the consequences of what they've done," Johnson told reporters on Monday.

"This was clearly an unacceptable and outrageous attack on commercial shipping. A UK national died. It is absolutely vital that Iran and every other country respects the freedoms of navigation around the world and the UK will continue to insist on that," Johnson added.

On 30 July, an attack on the Mercer Street petroleum products tanker in the Arabian Sea caused the deaths of two of its crew members, one British and one Romanian, the Israeli-owned company managing the vessel, Zodiac Maritime, has said.

Earlier on Monday, the UK summoned the Iranian ambassador to London, Mohsen Baharvan, for a meeting at the Foreign Office where Tehran was told it must "immediately cease actions that risk international peace and security."

James Cleverly, the UK Minister for the Middle East, told Baharvan that "vessels must be allowed to navigate freely in accordance with international law".

Today, I summoned Iranian Ambassador to the UK, Mohsen Baharvand, to the FCDO.

The statements came after both the US and Israel said there was "evidence" Iran was responsible for the attack.

US Secretary of State Antony Blinken said Washington was "confident that Iran conducted this", and that an "appropriate response" would follow, while Israeli Prime Minister Naftali Bennett said Israel would "send a message to Iran in our own way".

On Monday, Iran pushed back against the claims and warned the UK, US and Israel that Tehran would respond to any "adventurism". Iran "will not hesitate to protect its security and national interests, and will immediately and decisively respond to any possible adventurism", said Saeed Khatibzadeh, the Iranian foreign ministry spokesman.

He dismissed the US's and UK's allegations as "contradictory" and said that "if they have any evidence to support their baseless claims they should provide them".

Iran and Israel have accused each other of carrying out attacks on vessels in recent months.

The exchanges come amid high-level negotiations aimed at salvaging the Iran nuclear deal, which was dealt a major blow in 2018 when then-US President Donald Trump unilaterally withdrew from the pact and reimposed harsh sanctions.

The Biden administration has entered into negotiations to seek a return to the deal, and a seventh-round of indirect negotiations are expected to take place soon in Vienna.

For years, the Israeli government has been sounding the alarm about Iran's nuclear programme and is suspected to have carried cyber operations against Iranian atomic facilities in coordination with Washington. 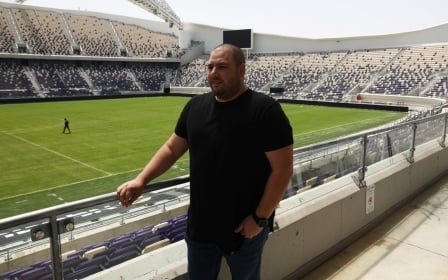