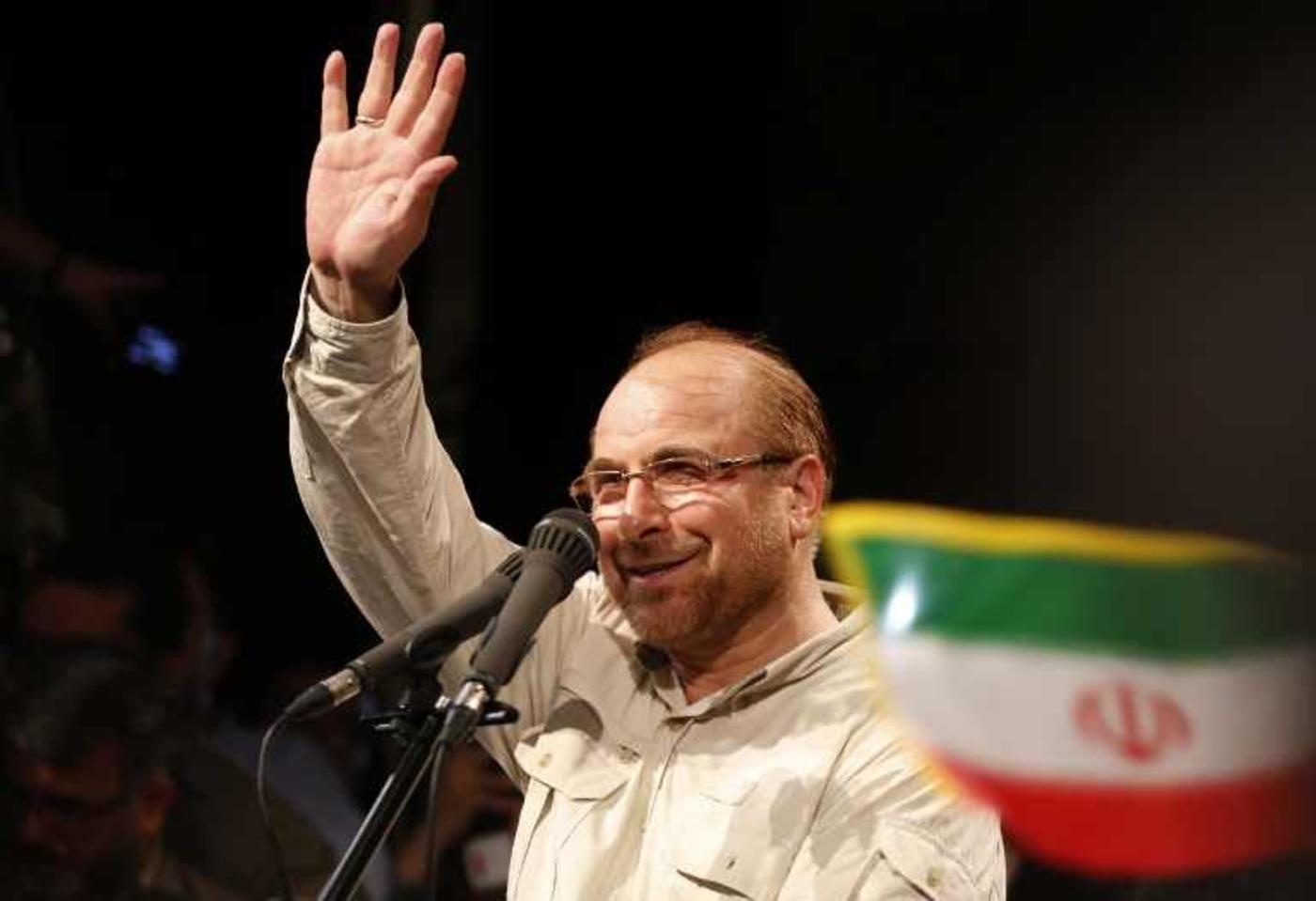 Ghalibaf, a former Tehran mayor and ex-national police chief, won 230 of the 267 votes cast (AFP)
By
MEE and agencies

Iran's new parliament on Thursday elected former commander of the Revolutionary Guard's air force Mohammad Bagher Ghalibaf as its speaker, consolidating the power of hardliners ahead of next year's presidential election.

The vote further shifts the political balance toward ultra-conservative opponents of the relatively moderate President Hassan Rouhani at a time when Iran is engaged in a bitter standoff with its arch-foe the United States.

Ghalibaf succeeds long-time speaker Ali Larijani, who had held the post since 2008.

State television said the 58-year-old Ghalibaf, also a former Tehran mayor and ex-national police chief, had won 230 of the 267 votes cast to secure one of the most influential positions in the Islamic Republic. Bespectacled, balding and wearing a dark suit, Ghalibaf accepted congratulations from MPs, then moved towards the speaker's seat with a smile and told the chamber: "I thank God for being given a chance to serve the people."

Ghalibaf is a three-time presidential candidate who served as Tehran mayor from 2005 to 2017.

In the vote for the speaker post, he roundly defeated conservative lawmakers Fereydoun Abbasi and Mostafa Mirsalim, who garnered 17 and 12 votes respectively.

Ghalibaf also received the most votes from the capital in Iran's 21 February parliamentary election, which saw the lowest turnout in decades.

The record abstention was partly over the disqualification of many moderate and reformist candidates by the Guardian Council, a watchdog dominated by hardliners, AFP reported.

An alliance of "principalists", or conservatives, along with ultra-conservatives, swept the election in the absence of any challenge from the reformist side.

Following the election, parliament is now dominated by hardliners who have opposed Rouhani on almost all issues, from dealing with the US to running the sanctions-hit economy and containing the region's deadliest coronavirus outbreak.

The health ministry said on Thursday that the virus had claimed 63 more lives, taking the death toll to 7,627 people out of 143,849 confirmed cases since Iran reported its first fatalities on 19 February.

The parliament, which substantially shapes political debate in Iran, had been closed for six weeks until 7 April as part of measures aiming to curb the spread of the novel coronavirus, officially known as Covid-19.

Of the 279 MPs elected in February, two died of the virus and nine were disqualified by the outgoing parliament.

Iran is scheduled to hold a presidential poll in around 12 months when Rouhani's second and final term ends.

Ghalibaf had unsuccessfully challenged Rouhani's first bid for the presidency and dropped out of the 2017 election to support Ebrahim Raisi, who now serves as Iran's judiciary chief.

Supreme Leader Ayatollah Ali Khamenei appointed the outgoing Larijani as his adviser and a member of the Expediency Discernment Council, a body set up to settle disputes between parliament and the Guardian Council, state television said. Larijani also congratulated Ghalibaf in a statement and said he had been a "hardworking manager of the system in different positions", AFP reported.

The speaker not only directs parliamentary affairs but also has a seat at the High Council of Economic Coordination alongside the president and judiciary chief.

Established in 2018 by the supreme leader's decree, the council is the highest authority on economic affairs and is meant to combat the impact of US sanctions imposed on Iran.

US President Donald Trump withdrew from a landmark nuclear agreement and reimposed sanctions on Iran in 2018, mainly targeting the crucial oil and banking sectors.

Decades-old tensions between Iran and the US have soared since then, with the two sworn enemies coming to the brink of confrontation on at least two occasions in the past year. Inside Iran
Under lockdown, Iranians turn to Instagram to break taboos