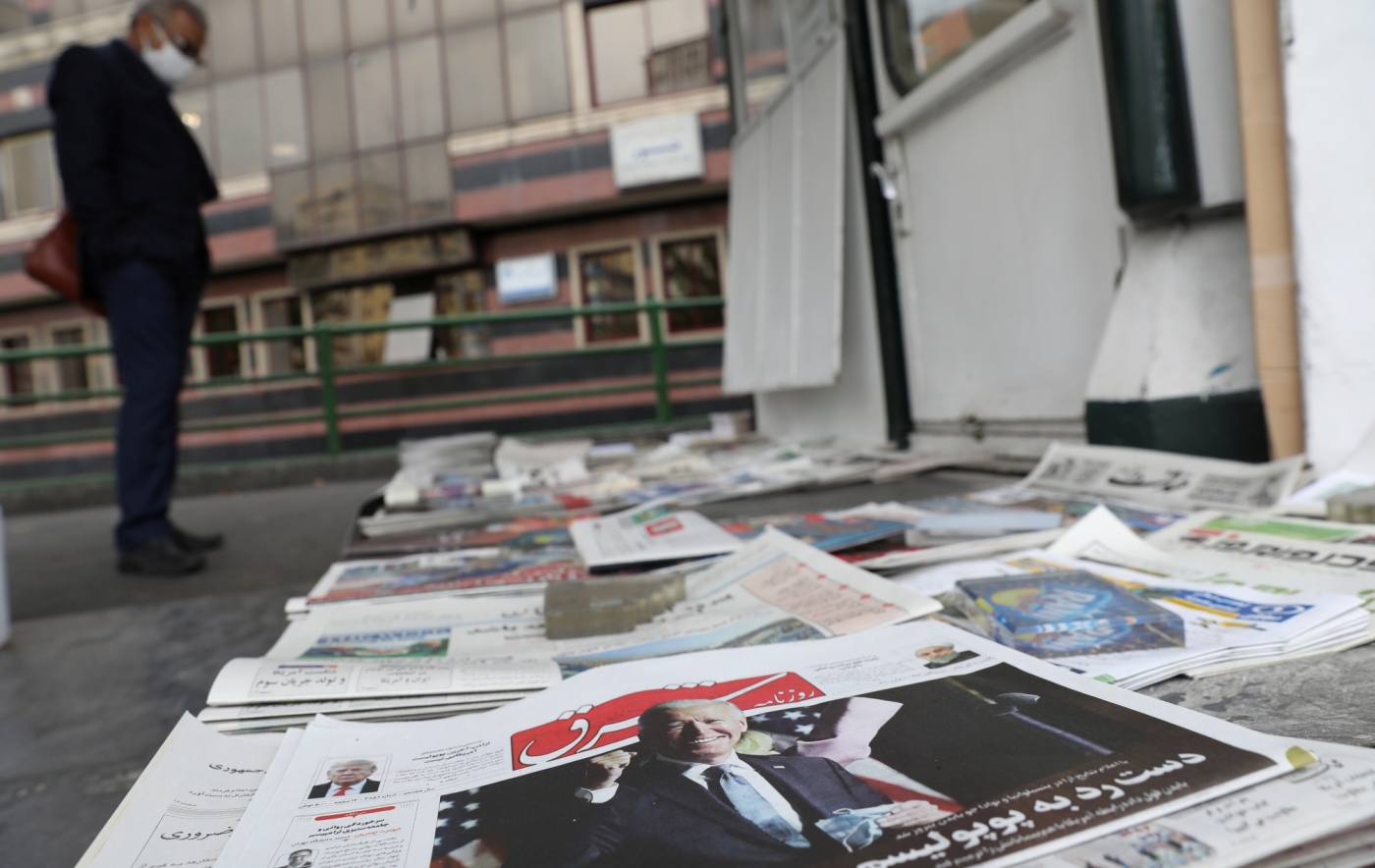 A newspaper with a front picture of US President-elect Joe Biden is seen at a newsstand in Tehran, Iran on 8 November 2020 (Reuters)
By
MEE correspondent

Iran's conservatives will talk to Biden

Shortly after the electoral defeat of US President Donald Trump at the hands of Democratic rival Joe Biden was announced, a rift began between Iranian hardliners and members of the moderate government of President Hassan Rouhani over who might lead potential negotiations with the upcoming US administration.

Iran’s current parliament, judicial system and the powerful Islamic Revolutionary Guard Corps (IRGC) are controlled by the conservatives, the main political faction that opposed the 2015 nuclear deal between Tehran and world powers.

However, conservatives, who are gearing up for Iran’s own presidential elections in 2021, have signalled for the first time their readiness to sit at the negotiation table with Washington.

Iranian hardline politician Hamidreza Taraghi recently told local media that conservatives were the only political faction who could lead fruitful negotiations with the US.

“If talks are essential, they must be held by an inviolable team who can secure [Iran’s] national interests,” Taraghi was quoted by the Aftab daily as saying.

“Our negotiators should not be like the [nuclear] negotiation team, which two American agents had infiltrated,” he added, without providing any evidence for his claim that US agents were among the Iranian negotiation team that reached the 2015 accord.

Meanwhile, reformist analysts and moderate politicians have suggested that the hardliners would not oppose talks with Washington if conservatives could lead the negotiation team.

“Next year, when the conservative-controlled parliament, the presidential office and other branches of power are all in the hands of conservatives, they will make a move to negotiate with the US,” Iranian political analyst Sadegh Zibakalam was quoted by Aftab as saying.

Moderate politician Mohammad Hashemi has also criticised the conservatives for changing their stance on negotiations.

“There is a political faction in the country that thinks negotiations are only good if they carry it out themselves, but it is bad if their rivals hold the talks,” Hashemi told Shargh daily. “Their doctrine is not based on the country’s national interests, but on their factional interests.”

The IRGC-affiliated Javan daily reported that Hatami assured his Iraqi counterpart that Tehran was ready to provide support to Baghdad to improve Iraq’s defence capabilities.

“We believe that regional security should be established by the countries in the region,” Hatami was quoted by Javan as saying.

“Peace and stability will remain out of reach in the region unless the intervention and presence of transregional troops ends,” he added, referring to the presence of over 40,000 US troops in the Gulf and Iraq.

Only one photo was published by Iranian media with no further information about the meeting.

In a video conference on Monday, foreign ministry spokesman Saeed Khatibzadeh told journalists that the Iraqi delegation visited Iran in response to an official invitation by Iran’s military officials to negotiate cooperation regarding “defence, border security and the fight against terrorism”.

Since the 2003 invasion of Iraq, Iran has enjoyed a great influence on Baghdad’s domestic politics. During the conflict against the Islamic State group, Tehran expanded its influence by providing arms and training to Iraqi Shia militias.

Officials in Tehran plan to introduce new mechanisms to unblock frozen funds and facilitate foreign investment in Iran, hoping that US president-elect Biden will remove sanctions imposed on Iran by the Trump administration.

According to the official daily Iran, Rouhani tasked Iran’s foreign ministry and the central bank with assisting the return of Iranian money blocked in other countries.

Since the unilateral US withdrawal from the 2015 nuclear deal in 2018, billions of dollars owed to Tehran from the export of oil to other countries have been blocked due to US sanctions on Iran’s banking system.

In the past two years, Iran has faced its worst economic crisis, with the Iranian rial losing over 70 percent of its value against foreign currencies.

Meanwhile, economists in Iran have warned that, even if Biden removed his country’s sanctions on Iran’s banking system, Tehran won’t be able to access its frozen funds because it is blacklisted by the global dirty money watchdog, the Financial Action Task Force (FATF).

“The lifting of sanctions won’t do us any good, if we cannot set up a wire transfer by joining the FATF,” Ahmad Pour Fallah, president of the Italy-Iran chamber of commerce, told ILNA news agency.

Since February, Iran has been blacklisted by the FATF for failing to comply with international anti-terrorism financing norms.