Iranian president questions timing of leaked audio, claiming it's aimed at creating domestic discord while nuclear negotiations with the US continue Iran's President Hassan Rouhani said on Wednesday that the leak of an audio recording of his top diplomat was aimed at creating "discord" within the Islamic republic during talks aimed at reviving an international nuclear deal.

At least three hours of Foreign Minister Mohammad Javad Zarif speaking about a variety of issues was released earlier this week by Iran International, a London-based Farsi-language media network.

Rouhani said the audio was leaked just as the talks in Vienna were "at the height of their success, so that it creates discord inside" Iran.

"We can only lift sanctions through unity," the president said. The Vienna talks are aimed at getting the United States to return to the Iran nuclear deal. The agreement, known as the Joint Comprehensive Plan of Action (JCPOA), was signed in 2015 by Iran and the P5+1, the five permanent members of the UN Security Council - the US, Russia, China, the UK and France - plus Germany.

The US pulled out of the deal in 2018 under former President Donald Trump, who embarked on a maximum pressure campaign of sanctions against Iran. In response, Iran has been producing nuclear materials beyond the limits set by the accord.

Rouhani, who has ordered a probe into who leaked the "stolen" recording, praised Zarif for his track record and achievements but also set out his position on the relationship between Iran's military and diplomacy.

He said the "difficult path" of nuclear talks "was trodden with the sacrifice, selflessness and resistance of diplomats and today at the helm of this movement, is a knowledgeable person familiar with issues like Dr. Zarif."

But "the [military] field and diplomacy are not two fields against each other," Rouhani said.

"Two hands ultimately come together and do one thing," he said, emphasising that there was a "system and a framework" of discussing issues in both fields in Iran's Supreme National Security Council.

The leaked remarks sparked harsh criticism from conservative media and politicians, with the mention of Iran's slain general Qassem Soleimani stirring up a political storm in the country.

Zarif, seen as the architect of the 2015 nuclear accord, has been mentioned as a possible contender in the 18 June presidential election, although he has said he does not plan to run.

In his first public reaction to the audiotape, Zarif took to social media to downplay the recording while voicing regret that it had triggered "domestic infighting".

But despite the furious reaction from conservatives, he stuck to much of what he said in the recording, saying the "main point" of his remarks was to emphasise "the need for a smart adjustment of the relationship between" diplomacy and the military.

In a post on Instagram, Zarif said an "honest and passionate" argument in a private setting had been misconstrued as "personal criticism". 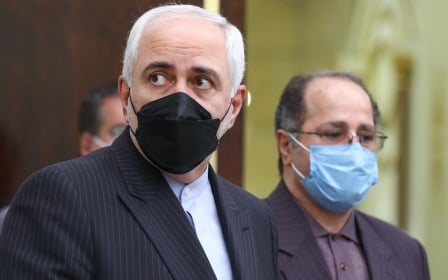