Meanwhile, the judiciary hands journalist and artists long prison sentences, and officials say Iran will further reduce its commitments to the nuclear deal 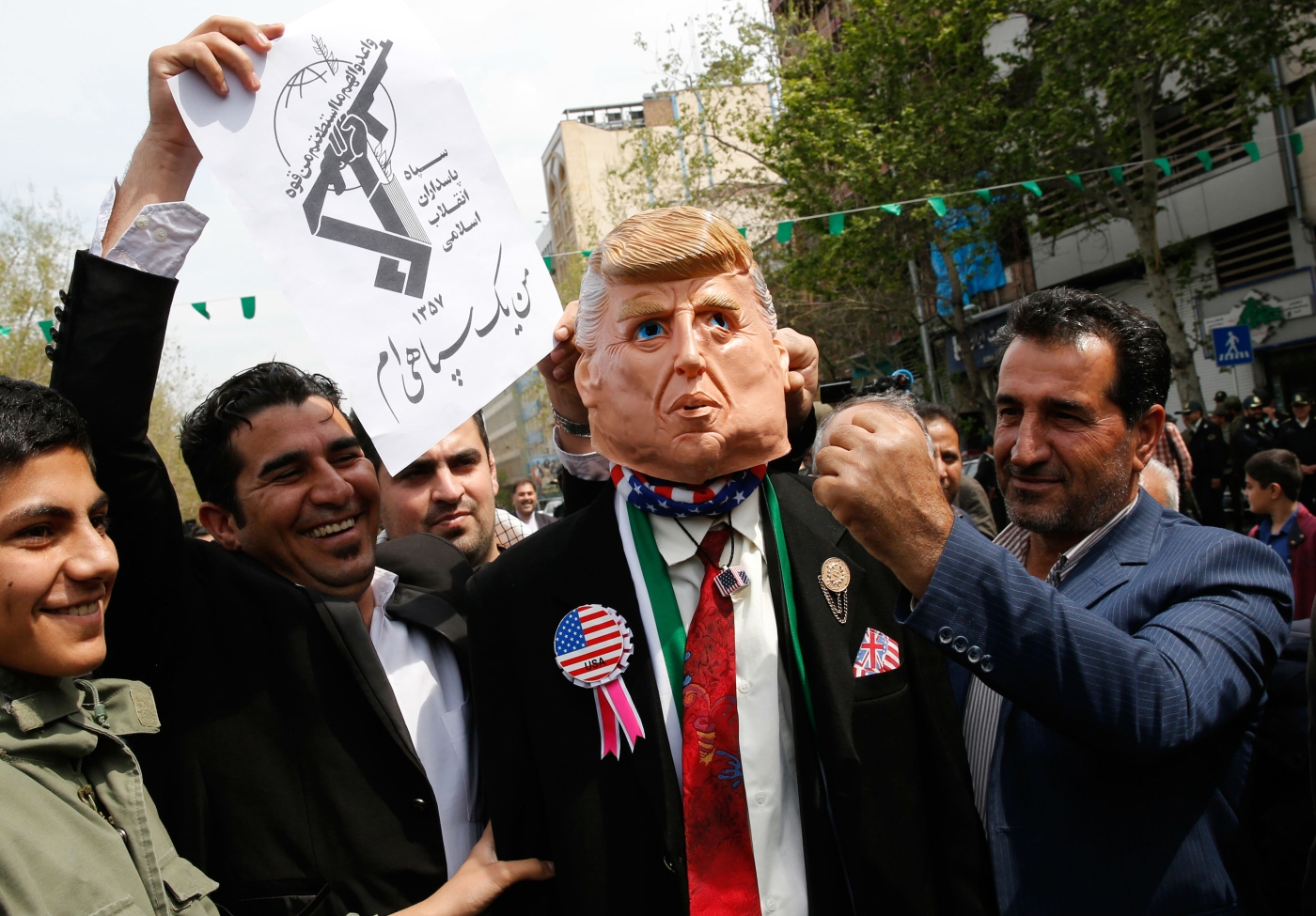 Less than an hour after French President Emmanuel Macron said a meeting between Donald Trump and Hassan Rouhani is possible, Iranian conservatives have reminded their president of his own words about the worthlessness of negotiating with the US.

All conservative outlets in Iran on Monday republished parts of a speech Rouhani gave to the Iranian parliament in October 2018, in which he asked Washington: “Are other [countries] mad to negotiate with you? You, who have violated an agreement which was also adopted by the United Nations Security Council.”

'Macron’s announcement of a negotiation between Trump and Rouhani seems to be a giant political trap, and Rouhani is at the verge of falling in it'

A day after France’s offer to mediate a meeting between Tehran and Washington, Rouhani rejected any talks before the removal of all US sanctions against Iran. However, the hardliners, who have been the main opponents of the 2015 nuclear deal with world powers, quickly warned Rouhani against any possible meeting with Trump.

“The most significant result of your [administration’s] meetings and negotiations with the US has been the nuclear deal, which no one doubts has been nothing but a catastrophe,” Hossein Shariatmadari, representative of Iran’s supreme leader, wrote in Kayhan daily.

The Khorasan daily also warned Rouhani that Iran’s return to the negotiating table with the US would be interpreted as a "sign of retreat and frustration" due to the sanctions.

Meanwhile, reformist and moderate politicians urged Rouhani to be careful about the positive signals he has been sending to the West about talks with Washington.

“Macron’s announcement of a negotiation between Trump and Rouhani seems to be a giant political trap, and Rouhani is at the verge of falling in it,” Mohammad Ali Abtahi, prominent Iranian reformist politician, wrote on Twitter.

He also stressed that sending positive signals to the offer would only result in more international pressure on Iran, and that the conservatives will exercise further oppression in the country.

Ahmad Zeidabadi, another prominent political analyst and former prisoner, warned Rouhani that his vague speeches about "being ready to meet with anyone who could help improve the situation of the country can only cause him further difficulties with the conservatives".

“Rouhani is gambling dangerously,” Zeidabadi wrote on Telegram. “If he enters such a game without the official and clear confirmation of his rival political faction, he will not gain anything but trouble and accusation.”

Journalist sentenced to over 10 years in prison, 148 lashes

Journalist Marzieh Amiri was sentenced to a 10-and-a-half-year sentence and 148 lashes after being arrested while covering a demonstration on May Day in Tehran.

Amiri was kept in solitary confinement and had no access to a lawyer during the investigation process.

The order was issued by a lower court and Amiri’s lawyer told Borna News that he hoped to reduce the punishment in the appeals court. Most of the charges against Amiri are related to her posts on Twitter and Instagram about labour activists, her lawyer said.

In a separate case, an internationally acclaimed Iranian actor and director has been banned from travelling abroad by law enforcement, according to ISNA news agency.

Pegah Ahangarany told ISNA that she was travelling from Iran to Georgia to participate in the Batumi Film Festival as a member of the festival’s jury, but she was told at the airport that she could not leave the country.

Ahangarany was among a group of well-known artists who were arrested during demonstrations against the results of the 2009 presidential elections and was handed a two-year sentence. However, she has not yet been summoned to prison.

Meanwhile, reports from human rights groups indicate that Iranian cinema and theatre photographer Nooshin Jafari has been under pressure in Evin prison over a false confession.

Jafari was arrested on 4 August and has only been able to contact her family once since. The authorities have not provided any details about her charges, but it is believed that she was suspected of being behind a Twitter account that openly criticises Iran’s supreme leader.

Foreign Minister Mohammad Javad Zarif said Iran will take a third step in reducing its compliance to the nuclear deal on 6 September if the European signatories fail to meet their commitments, Tasnim news agency reports.

On Tuesday, Ali Akbar Salehi, the head of Iran’s Atomic Energy Organisation, told reporters that Iran has increased its production of uranium to 30 tonnes in recent years. He added that this amount might grow to 50 tonnes if the country finds it necessary.

On 8 May, a year after the US unilaterally withdrew from the 2015 nuclear deal and imposed devastating sanctions on the country, Iran passed the 300 kilogram limit of its enriched uranium stockpile that was agreed under the nuclear deal.

Two months later, as a second step, the country crossed the 3.67 percent uranium enrichment limit, by increasing the level to 4 percent.

Iranian officials have stressed that anytime European countries help Iran to sell its oil in international market, they will renew their commitment to the deal.