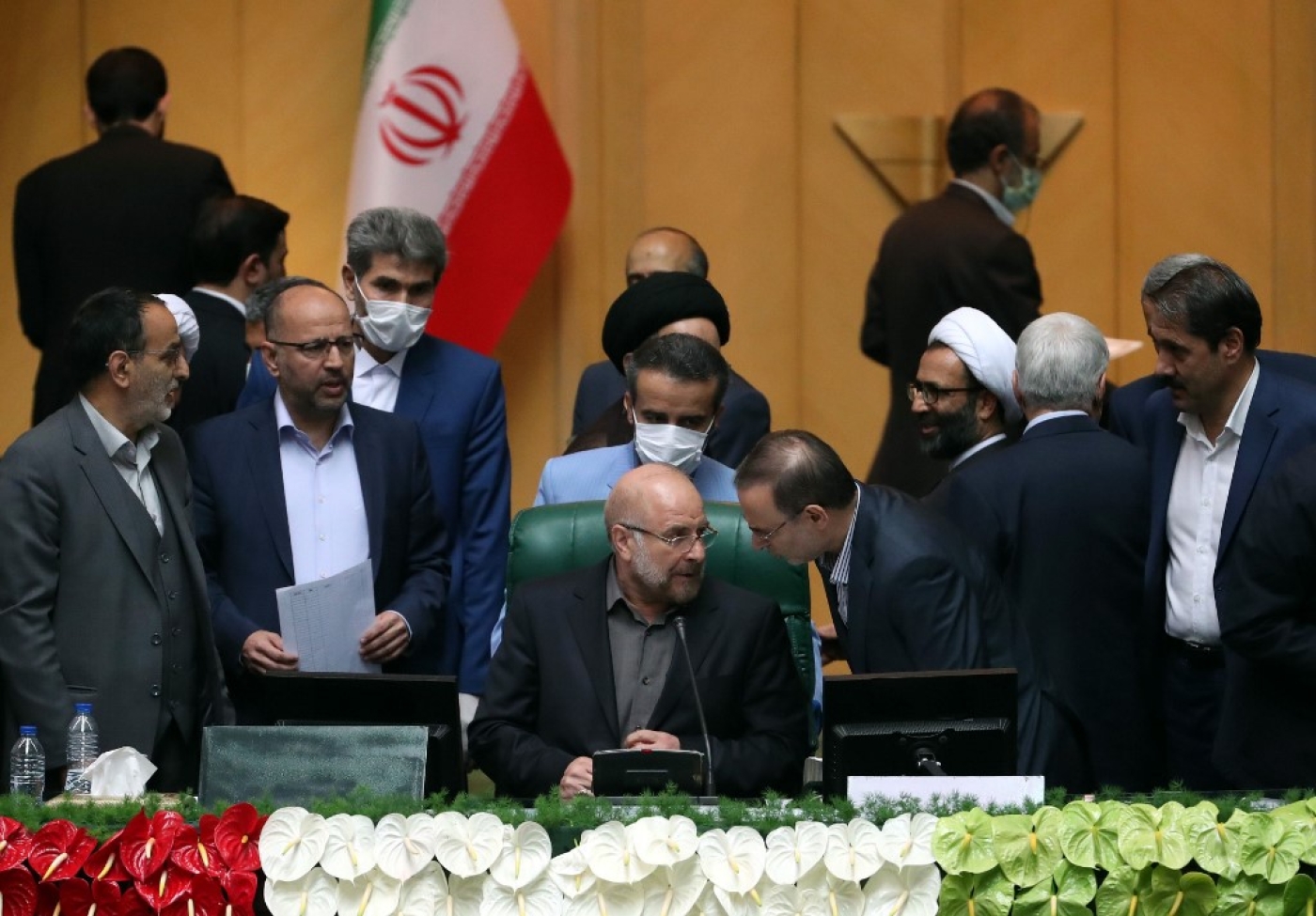 The war of words between Iran’s conservative-dominated parliament and members of the moderate government of President Hassan Rouhani reached new heights this week over a lack of development of the oil-rich Khuzestan province.

Ghalibaf, a former commander of the Islamic Revolutionary Guard Corps (IRGC), competed against Rouhani in the 2012 and 2016 presidential elections. His office announced that he had visited Khuzestan to hold a meeting with labour activists at the Haft Tapeh sugar company in the city of Shush, and to check on a water supply plan for villages in the Ghizanieh region, south of Ahvaz.

Since May, residents of Ghizanieh have organized several sit-ins and road blockades to protest water shortages. Some of the protests led to confrontations with police. Ghalibaf’s visit was hailed as a political coup by right-wing media and conserative politicians. He used the occasion to take aim at Rouhani’s administration.

“The country’s wealth has been wasted by indecisions, bad decisions and leaving the people in uncertainty,” Ghalibaf was quoted by ISNA news agency as saying in Khuzestan.

Meanwhile, Rouhani’s supporters accused Ghalibaf of neglecting his duty to pass laws, chiding him for dedicating his time to provincial visits with next year's presidential election in mind.

“Officials in Islamic Republic of Iran have always tried to stay in direct contact with people, however, it is worrying when this positive deed turns out to be a show-off,” he wrote.

The start of the school year amid the continuing Covid-19 pandemic has laid bare some deep inequalities experienced by millions of Iranian families, with students in rural parts of the country and small towns unable to access the internet or the required technology for virtual learning.

Mohsen Haji Mirzaei, Iran’s education minister, had announced that the new school year was set to begin on 5 September and that virtual learning would take place only in regions categorised as red zones - those highly vulnerable to the spread of the virus.

But Iranian legislator Mehdi Esmaeili told the country’s national broadcaster that about 3.5 million Iranian students have no access to the basic infrastructure for virtual learning.

Since the beginning of the pandemic in Iran, the Shad homegrown application was introduced to students for virtual classes.

However, experts said that 30 percent of students from low-income families live in regions without internet coverage, or are unable to afford the internet or the necessary electronic devices to attend virtual classes.

In recent years, virtual learning has become more popular in private schools in cities, but students in rural parts of Iran and underprivileged neighbourhoods of big cities only have access to in-person learning. The gap in education has deepened since the virus swept through the country, leading to the closure of schools in May.

Iran is the hardest-hit country in the Middle East by the pandemic. According to official data, the country’s coronavirus death toll has surpassed 22,000. Health-care experts have warned that the real number of deaths in Iran may be double the official figures.

Judges in Iran have suspended a three-year prison sentence for Kayvan Samimi, veteran journalist and head of Iran’s freedom of the press association, local media reported.

Samimi, editor-in-chief of the montly magazine Iran-e Farda, was summoned to the infamous Evin prison on 24 August. However, his lawyer, in a new statement of defence, requested suspension of the sentence because of Samimi’s heart disease and lung condition.

According to the website Iran Emrooz, Samimi’s medical record has been handed to Iran’s medical jurisprudence for further examination, and his prison term has been suspended pending a further court decision.

In April, Samimi was sentenced to five years after his arrest during the May 2019 International Workers’ Day demonstration in front of parliament. In July, an appeals court handed a further three-year jail sentence to the 72-year-old journalist and activist on charges of “colluding against national security”.

Before the recent suspension of his jail sentence, in an interview with the US-based Center for Human Rights in Iran, Samimi said: “I’ll go to prison, I’ll return, and I’ll continue the same path. I’m alive with my beliefs and in the future I will walk on the same path.”

Samimi is a highly respected journalist and activist in Iran because of his independent political stances. He has spent more than 11 years in prison for his activism and journalistic work. He was 17 when he was first arrested, at a demonstration against the Shah, Iran’s last king.

Stronger ties with Venezuela despite US sanctions

Iran’s Fars news agency, which is close to the Islamic Revolutionary Guard Corps, has revealed that the Iranian-flagged vessel Golsan is heading back to Iran from Venezuela with a cargo of aluminium, despite Washington's full embargo on the economies of both countries.

On 27 August, Reuters reported that the Golsan was sailing east across the Atlantic with a cargo of aluminum, stressing that the customer for the cargo and the final destination of the vessel were not declared.

Fars has implied that the vessel's final destination is Iran.

The news agency also reported that amid the US sanctions and Iran’s inability to import most of the goods it needs, Tehran has shifted its importing policy towards bartering.

Iran and Venezuela have expanded their economic ties in recent months. In May, Iran exported more than 1.5 million barrels of gasoline to Venezuela, as well as providing technical support to help Caracas restore its refineries.

Meanwhile, Iranian political analyst Mehdi Abadi wrote that the recent attempts by Tehran and Caracas to expand ties are more a political ploy than an economic endeavor.

“Officials [in Tehran and Caracas] know that any news about the failure of the US’s maximum pressure campaign would have a heavy cost for Donald Trump’s presidential campaign,” Abadi wrote in an analysis for BBC Persian.

“In this regard, both countries widely propagate any news about their smallest success in having new economic ties.”

Media
Iranian press review: Ambassador to Iraq 'happy' to be on US sanctions list
Inside Iran
'Enough is enough': Iranians frustrated over police drive to enforce hijab-wearing in cars
Coronavirus
Iran records its highest daily death toll from coronavirus