The outcome of today's elections seems pre-ordained, with no reformist candidates running in two-thirds of Iran's provinces 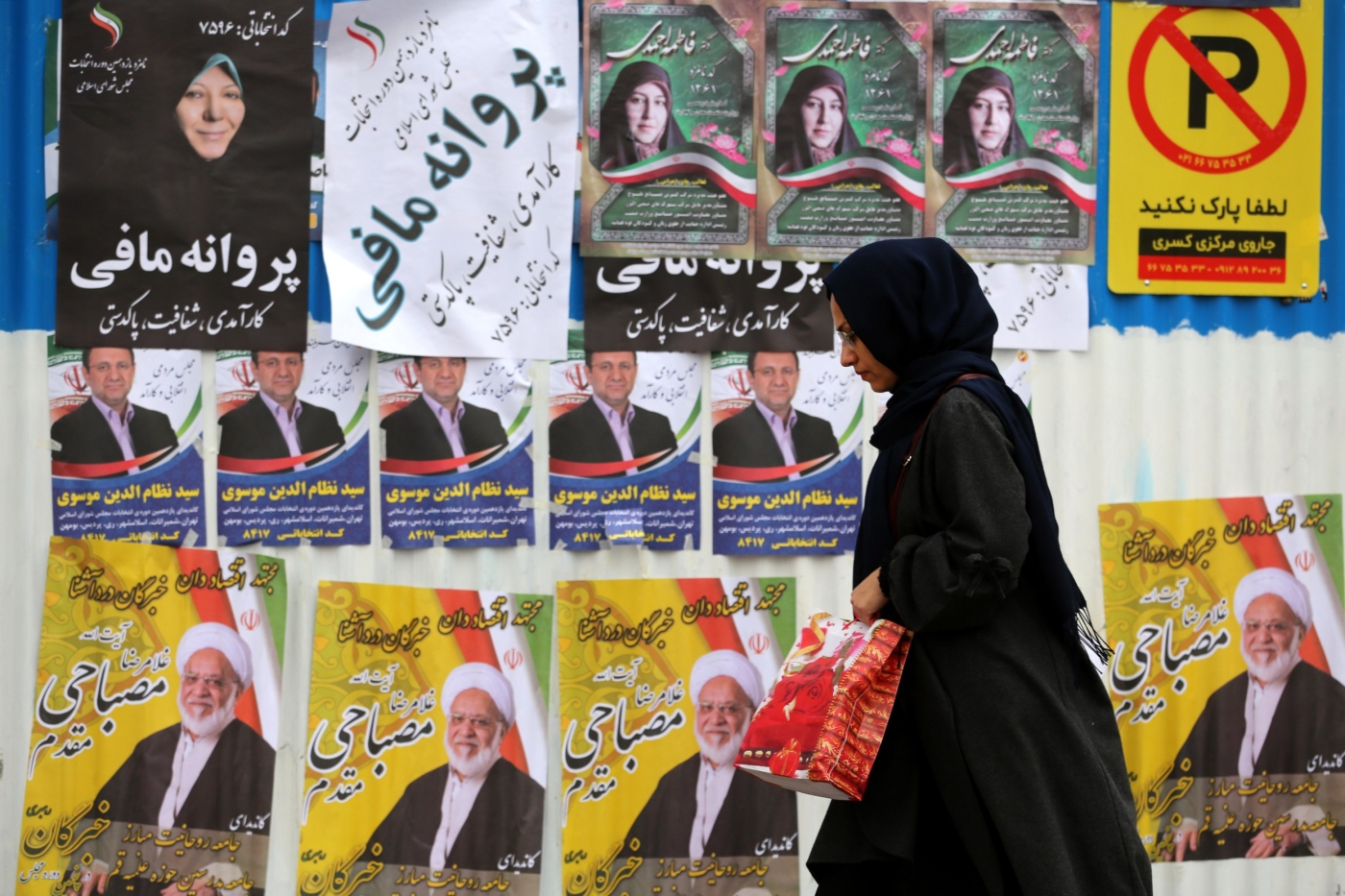 An Iranian woman walks past electoral posters and fliers during the last day of election campaigning in the capital Tehran, on 19 February 2020 (AFP)
By
Rohollah Faghihi
in
Tehran

On Friday, Iran will hold parliamentary elections, amid allegations by the country’s reformists that the race has been unfairly skewed in favour of hardliners.

Iran’s 290-seat parliament is subjected to a vote every four years. Before running, candidates must be approved by the hardline-dominated Guardian Council, whose members are chosen by Supreme Leader Ali Khamenei and the judiciary chief.

The Guardian Council has long been accused of vetting candidates based on its own political tendencies, as prominent and outspoken reformists have largely been barred from running. Iran elections: How Khamenei is closing down the reformists
Read More »

But this year, the issue has gained even larger proportions, as the council barred a majority of reformist candidates while most conservatives and hardliners were approved - although no exact numbers were made public.

According to senior reformist activist Azar Mansoori, aside from the capital Tehran, reformists have no candidates in two-thirds of Iranian provinces.

But while reformists hold few illusions about how well they will fare in the election, more conservative parties have also found themselves dealing with internal divisions.

While reformists are seen as the most liberal faction, they nonetheless fully back the Islamic Republic’s self-proclaimed “revolutionary” policies, including countering the US and the West as well as opposing more political and social freedoms.

The first main faction is known as the “Revolutionary” ticket, led by Mohammad-Bagher Qalibaf. A three-time presidential candidate, Qalibaf withdrew from the 2017 election to benefit fellow candidate Ebrahim Raisi, who is now the judiciary chief - the very one vetting candidacies on the Guardian Council.

While many believe Qalibaf's popularity has suffered as a result of weak presidential debate performances, he is now the leading conservative choice to chair the parliament. Four decades on, the West still doesn't get the Iranian revolution
Read More »

Meanwhile, hardliners loathe him for his support of the Joint Comprehensive Plan of Action (JCPOA) and cases of corruption in his entourage. Despite this, the old guard has supported the “Revolutionary” faction.

The 2015 JCPOA nuclear deal between Iran and western powers paved the way for lessened sanctions in exchange for reducing Tehran’s nuclear capabilities.

However, the United States pulled out of the JCPOA and reinstituted sanctions under President Donald Trump - heightening tensions and leading a growing number of hardline politicians to argue in favour of Tehran withdrawing from the deal permanently.

On the other hand, there is the “Endurance Front”, a well-known hardline party established by a group of ministers and officials from the administration of former President Mahmoud Ahmadinejad.

Ayatollah Mohammad-Taqi Mesbah Yazdi, a figure who is known for his lack of flexibility and hardline positions on domestic and foreign policy issues, is the spiritual leader of this ultra-conservative group.

This group’s goal is to see Morteza Aghatehrani, a senior member of the party, become the next chairman of the parliament.

Despite their disagreements, the “Revolutionary” and “Endurance Front”'s interest in power finally led the two top contending lists on 19 February to put aside their differences and appear on one single ticket in the election.

While the reformist movement has announced that it has no real candidates to put on their ticket, a number of parties, including Kargozaran Sazandegi (Executives of Construction party), released their own candidate lists - raising eyebrows.

Kargozaran is one of the main reformist parties, with its senior member Eshaq Jahangiri currently serving as the vice president of the Rouhani government. However, most of Kargozaran’s candidates have also been rejected, leaving their ticket filled with mostly unknown candidates. 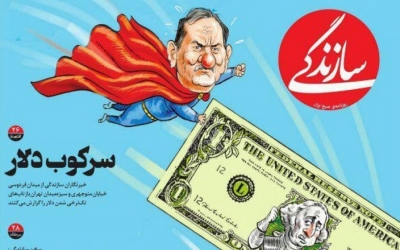 The current situation has evoked memories of the 2016 election, during which the Guardian Council also rejected a large number of reformist candidates.

But at the time, anger over hardliners’ performance in parliament and their attempts to block efforts by reformist President Hassan Rouhani to improve relations with the West - including through the JCPOA - motivated many people to take to the polls and cast their votes in favour of reformists, leading to their victory in Tehran and other big cities.

Today, however, large swathes of the reformists’ base have indicated that they are inclined not to vote in the election to express their objection to the political system. Some argue that the parliament has lost its power and that reformist MPs haven’t been able to pass any meaningful legislation without being blocked by conservatives and hardliners.

Past electoral trends have shown that large turnout rates tend to coincide with reformist and moderate wins.

But with reformists failing to fulfil their promises and giving up to pressure, their base appears disenchanted about the prospects of the election.

Hossein Kanani Moghaddam, a conservative activist, predicted that conservatives would win the election in Tehran and gain further influence to pressure the more moderate president.

“A majority of those who back revolutionary figures will vote for this current,” he told Middle East Eye. “In the next parliament, the atmosphere will be more opposed to arrogant powers [ie the US], and without any doubt, the Rouhani government has no way forward except following the path of parliament.”

The conservative slammed reformist criticisms of the Guardian Council. “This is a political tactic by reformists to portray themselves as oppressed in order to attract more votes,” he said.

Meanwhile, former reformist MP Dariush Qanbari made a similar prediction, telling MEE that the conservatives would most likely emerge as winners of this “non-competitive” race.

“The radicals have already begun celebrating their victory, and for sure, in a non-competitive election, their chance will increase and they will win the election,” said Qanbari, who himself was barred from running. “There is the possibility that we will face a low turnout, and those who prevented the race from being competitive are to blame for this.”

The former MP called on Iranian citizens to participate in the election and vote for the remaining reformist and moderate candidates “in order to stop hardliners from entering parliament”.

“Radicals’ ascension to power would hurt the country’s national interest, and this is a real threat to Iran and everyone should be alerted,” he argued. “We all should be united and vote or we will regret it later.”

The assassination of top Islamic Revolutionary Guard Corps General Qassem Soleimani by the US army in January threatened to turn US-Iran enmity into all-out war. While further violent escalation was narrowly avoided, Iran declared it would no longer abide by the JCPOA limitations, while still leaving the door open for a resumption of the deal.

"I think in the wake of a hardliner victory, the Rouhani administration’s role in foreign policy will be weakened as MPs may pass bills in order to limit the president's authority," Majlesi said, adding that "if the moderate faces of the conservative camp manage to have the upper hand in parliament, the risk of the JCPOA dying may decrease as they will want to be credited for defusing tensions." Inside Iran
Iran elections: How Khamenei is closing down the reformists
Shahir Shahidsaless Inside Iran
Iran kicks off elections with thousands of candidates disqualified Inside Iran
'No alternative': Tehran voters opt for election boycott as authorities crack down