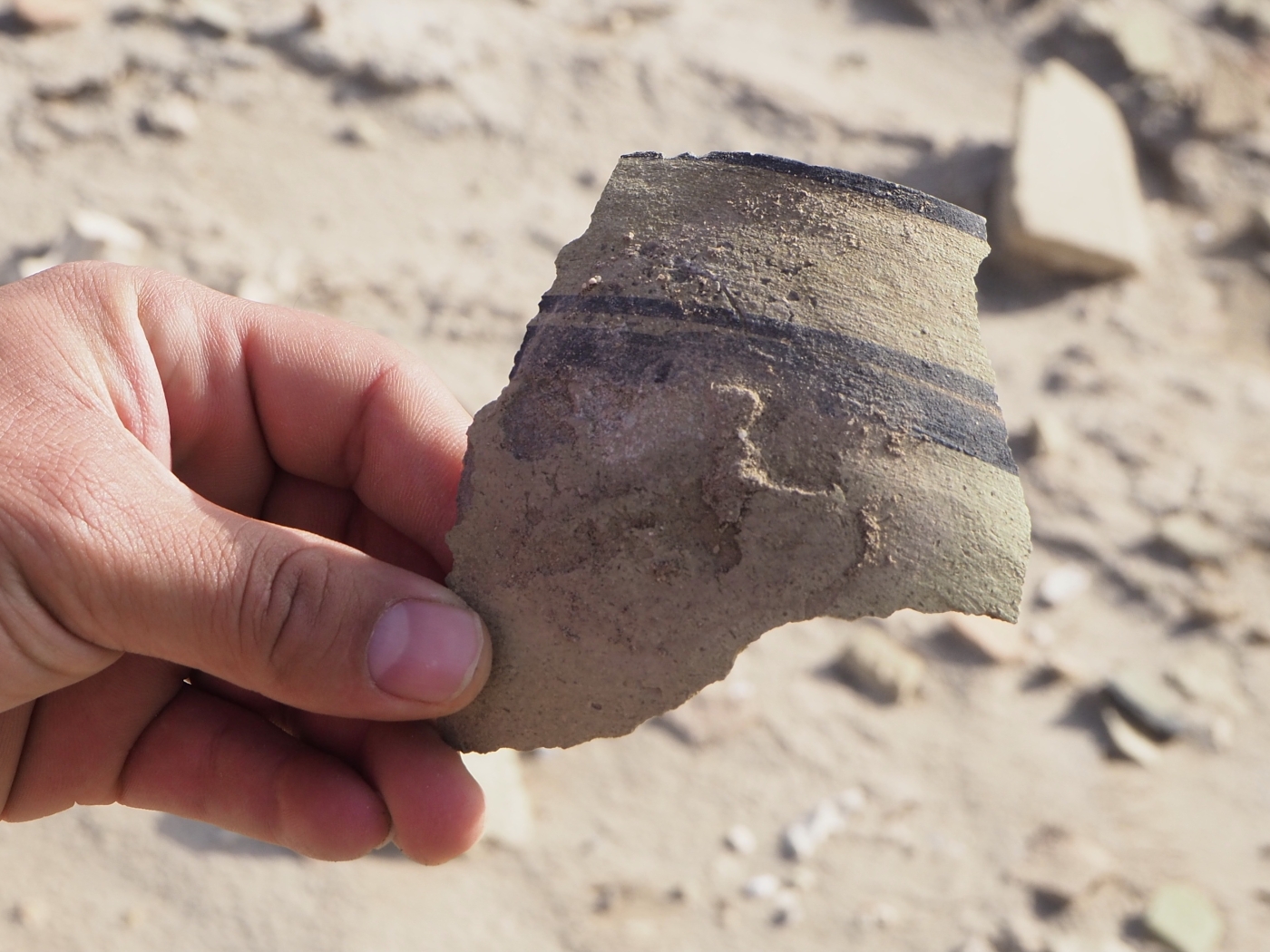 A shard of pottery found on the ground at Eridu, Iraq, long considered the earliest city in southern Mesopotamia (MEE/Tom Westcott)
By
Tom Westcott

A court case in Iraq has left two foreign tourists potentially facing the death penalty for alleged antiquities smuggling after collecting pottery shards as souvenirs. Their plight shows how vulnerable Iraqi heritage remains - and how unprepared the country is for its nascent tourism industry.

Briton Jim Fitton and German Volker Waldmann were arrested in late March at Baghdad airport after 32 ancient pottery shards were found in their tour group’s luggage. Octogenarian British tour leader Geoff Hann, who suffered a stroke, contracted Covid-19 and later died in a Baghdad hospital, and his South African tour assistant, who had already left the country, were also implicated.

As part of his defence in court, Fitton said that although he suspected the 12 pieces found in his luggage were ancient, he was ignorant of Iraqi laws relating to such artefacts, according to Sky News.

When he pointed out that some shards were “no larger than my fingernail”, lead judge Jaber Abdel-Jabir said: “Size doesn’t matter.”

The pottery items at the centre of the case are understood to originate from the ancient Mesopotamian site of Eridu, founded around 5,400BC and believed to be one of the earliest cities in the world.

Falling under "the Ahwar of southern Iraq: Refuge of biodiversity and the relict landscape of the Mesopotamian cities", along with nearby Ur and Uruk, Eridu was designated a Unesco world heritage site in 2016.

Formerly situated within a military area, Eridu has long been difficult to access, with exemptions mostly made for pre-arranged archaeological missions, which continue to undertake seasonal digs whenever the situation on the ground allows.

Independent visitors technically require special permission from Iraq’s State Board of Antiquities and Heritage (SBAH) and an accompanying escort from the local antiquities department in nearby Nasiriyah.

Remote and deserted, apart from encampments of semi-nomadic Bedouin farmers and their animals, the undulating site emerges from the desert as an expansive but inconsequential-looking mound.

Beneath its heat-cracked surface, however, is said to lie a huge ziggurat, of much larger proportions and from an earlier date than nearby Ur - excavated from the mid-19th to early-20th centuries -  according to Dhi Qar Antiquities Inspectorate’s heritage manager, Ali Tahir al-Moussawi.

'These places, in name and by definition, are ancient sites. One doesn't have to say it is forbidden'

Although unimpressive from a distance, Eridu’s magic is gradually revealed to its visitors by the archaeological fragments lying on its surface. Square slabs imprinted with cuneiform writing - the world’s first - nestle beneath plainer stones, while others, mostly cracked or broken, lie in the open, exposed to the elements.

Scattered across the site are pottery shards, some painted with maroon detail, along with what look like bent pottery nails, once used as wall decorations.

“Most of what we see here is from temples. They cared a lot about temples and put a lot of work into these,” said Moussawi. “Archaeologists believe there were more than seven temples here; possibly as many as 15.”

SBAH staff who picked up such fragments for Middle East Eye to photograph during a visit last year, either placed them back on the ground or buried them in shallow earth, to keep them out of immediate sight, as Moussawi said looters occasionally visited Eridu after heavy rains, hoping valuable pieces might have been naturally uncovered.

Photos claiming to show some of the pottery items found in the tourists’ luggage, published by Iraqi media shortly after their arrest, showed similar pieces to those visible at Eridu.

Although these are not believed to have any economic worth on the international antiquities markets, where unique Iraqi artefacts can command thousands of dollars, they do have historic value, with similar pieces displayed in Nasiriyah Museum.

Part of Fitton’s defence was that he was unaware it was against the law to collect such fragments and that there were no signs, fences or guards indicating that this was forbidden.

Judge Jabir was reported as responding: “These places, in name and by definition, are ancient sites. One doesn't have to say it is forbidden.”

Nearby Ur - a popular site attracting regular Iraqi and foreign visitors - has clear signs in English and Arabic warning against picking up artefacts or touching monuments. But Eridu is technically off-limits to tourists and is under the protection of a powerful local sheikh, keeping it largely unscathed by the looting that has plagued Iraqi heritage for decades and meaning there is little need for such signage.

“It’s not difficult for looters to reach here but the whole area is under the protection of one of the tribal sheikhs and everyone’s afraid of this tribe,” said Moussawi. “The sheikh protects all this land as if it were his own home.”

Involving southern Iraqi tribes - some of whom had participated in illegal digging and looting operations - with heritage protection was at the forefront of the work of former Iraqi culture minister Abdulameer al-Hamdani, who died last month.

Part of a family from the Mesopotamian Marshes, Hamdani described “a long history of destruction - four decades, from the Iran-Iraq war until now”, with illegal digging at archaeological sites burgeoning from the late 1990s, after Iraq was crippled by international sanctions and southern residents plunged into poverty.

Following the 2003 US-led invasion, security systems disintegrated, rendering the country’s heritage sector at its most vulnerable. Museums and galleries were plundered and, as unrest and poverty prevailed, there was an unprecedented resurgence of illegal digging at archaeological sites, leading to what Hamdani described as “a campaign of looting”.

'Umma is very dangerous. Looters still go there. They are not afraid and sometimes they shoot at the guards'

- Laith Hussein, State Board of Antiquities and Heritage

During this time, he said, “thousands of artefacts were stolen to be smuggled outside the country” heading for lucrative international marketplaces.

Then working as Nasiriyah’s inspector of antiquities, Hamdani, an archaeologist himself, tried every avenue to curb the looting. He sought religious support from Iraq’s highest Shia authority, Ayatollah Ali Sistani, who issued a fatwa forbidding antiquity thefts, enlisted the help of US forces and met with local tribes to generate support for heritage protection.

He also established the country’s first specially trained heritage protection police force in 2005, although this was soon redeployed to protect government institutions.

To date, Iraq’s heritage sector has remained a low priority, in the face of ongoing security and governance challenges. Although a handful of historic places are secured, thousands more archaeological sites in remote desert locations stand unfenced and unguarded.

The illegal digging and looting of Iraqi sites is often depicted as a historic problem, but it continues to this day.

The ancient Sumerian city of Umma, a few hours' drive from Eridu, has the dubious accolade of being Iraq’s most heavily plundered site. Resembling the surface of the moon in aerial photographs, relentless looting has changed the site’s structure from a once expansive hill to a series of pitted undulations, indicating hundreds of illegal digging spots. And Umma’s artefacts have generated such lucrative riches that even 24-hour guards struggle to keep the site safe.

In the weeks before MEE visited Umma - permitted only with an extensive military escort - gangs of armed looters had opened fire on the site’s guards at night on two separate occasions.

“Umma is very dangerous. Looters still go there. They are not afraid and sometimes they shoot at the guards. They called us many times [saying] looters are here shooting at us. It’s a remote area so there’s no police station there,” SBAH director Laith Hussein told MEE.

“We are tough with [the looters] but they are very tough people. They are criminals and can do anything.”

It was into this invisibly troubled landscape comprising four decades of ruinous looting practices that the nine-strong tour party with Hinterland Travel stepped.

War, terrorism and civil unrest have overshadowed Iraq’s long-standing heritage problems in the media, leaving many visitors ignorant of the country’s struggles against antiquities theft. Although Hann was well-versed in these, Fitton’s daughter Leila told MEE her father believed Hann’s deteriorating health had meant “security protocols were allowed to slip during the tour”, leading to some group members collecting ancient souvenirs.

Their case highlights how unprepared Iraq is for its nascent tourism industry. Since launching tourist visas on arrival last year, the country has started attracting heritage enthusiasts, serial travellers trying to collect passport stamps from every country and YouTubers whose videos have been widely viewed.

These tourists may not know much about Iraq’s complicated recent history, especially its poorly publicised fight against heritage-related crimes. Still recovering from decades of war, along with ongoing economic and governance problems, tourism infrastructure remains virtually non-existent, leaving independent visitors to puzzle their way around.

Inclined to be helpful, Iraqis potentially offering support to lone tourists may be equally unaware of heritage regulations as, across Iraq, many historic sites are treated locally as picnic spots where barbecues may be held in the shelter of ancient ruins.

If found guilty, the punishments Fitton and Waldmann - who claimed the two items found in his possession were given to him by his companion to carry - potentially face range from fines and imprisonment to the death penalty.

In reality, however, the death penalty is understood not to have been handed out for antiquities-related offences since the time of former Iraqi leader Saddam Hussein. An Iraqi official unconnected with the case and speaking on condition of anonymity told MEE that, in his opinion, a serious punishment would be an unlikely outcome and that the case was more symbolic.

While Iraq offers the intrepid traveller a unique experience in a land steeped in ancient and modern history, this ongoing court case indicates that opening to tourists before properly securing heritage sites is not without risk. 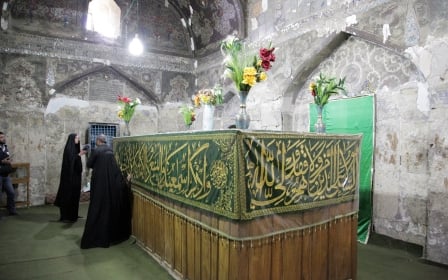 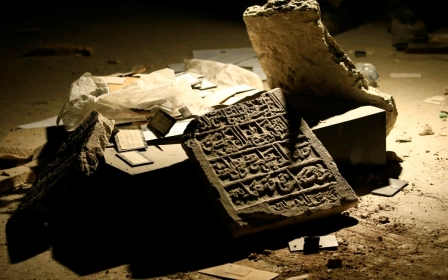 Heritage
'A shadow of its former self': Mosul Museum and the long road to recovery